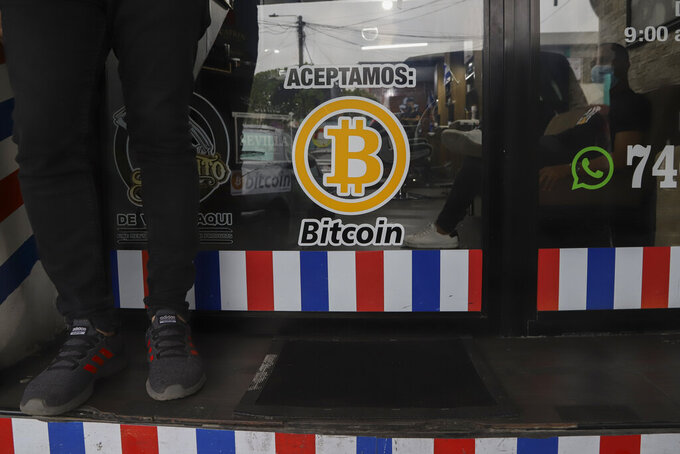 Salvador Melendez, ASSOCIATED PRESS
"We accept Bitcoin" is announced at a barber shop in Santa Tecla, El Salvador, Saturday, Sept. 4, 2021. Starting Tuesday, Sept. 7, all businesses will have to accept payments in Bitcoin, except those lacking the technology to do so. (AP Photo/Salvador Melendez)

MIAMI (AP) — El Salvador is betting that this week's pioneering adoption of Bitcoin will spur its economy, especially one of its most crucial sources of revenue: money sent home by Salvadorans in the United States.

A fervent proponent of the cryptocurrency, President Nayib Bukele has asked the more than 2 million Salvadorans who live overseas to send their remittances in Bitcoin, arguing it will be cheaper than transferring dollars. He also says it will stimulate foreign investment.

“It will be a great benefit for our people,” he has written in Twitter.

But both those at home and abroad are uncertain if the plan, which takes effect Tuesday, will work as intended. Some say the system is too complicated and opaque. Others worry about the way Bitcoin values can rise and fall sharply overnight — potentially giving recipients a windfall or a loss.

Looking on the bright side is William Justo, a 44-year-old Salvadoran who has lived in Chicago since 1986.

“Digital currency offers the opportunity of having access to something similar to a bank and making money when the currency goes up. Even farmers will have access to all of that,” said Justo, who sends remittances every week to two children, his wife and grandmother.

“It will be something very good for the economy,” said Justo, who says he may send bitcoins now instead of dollars.

“Old people and farmers, which are many of the Salvadorans who live here (in the United States), are not up with technological change,” said the 58-year-old. “It's going to be confusing, complex for them”.

Bitcoin, an alternative to government-backed money, exists only in computer circuits and memory. It's based on data-scrambling cryptography — thus the term “cryptocurrency” — lots of processing power and a distributed global ledger called a blockchain, which records all transactions.

No central bank or other institution has any say in its value, which is set entirely by people trading Bitcoin. That independence and secrecy have made it a favorite of people suspicious of governments, as well as criminals trying to hide their transactions.

Other countries have dabbled in cryptocurrencies, but none has gone so far as El Salvador.

Starting Tuesday, all businesses will have to accept payments in Bitcoin, except those lacking the technology to do so, according to a law approved by the congress, which is controlled by Bukele's New Ideas party.

The U.S. dollar, however, will remain the country's main currency and no one will be forced to pay in Bitcoin.

The government is using a digital wallet app called Chivo that can be used for payments and remittances in Bitcoin and Bukele has promised that Salvadoran citizens who download it and sign up will receive receive $30 worth of bitcoins in credit.

The legislature has allocated $150 million as a trust fund to get the system established.

Some 200 kiosks will be set up to let people make deposits — or withdraw their money in dollars.

Bukele argues Bitcoin will facilitate remittances because people don't need to deal with the formal financial system and won't have to pay fees to send money home — though David Gerard, author of “Attack of the 50 Foot Blockchain,” said he doesn't think that's a big issue since El Salvador's use of the dollar means there's no need to convert currencies and fees are already low.

He also said the country doesn't yet have an infrastructure — things like customer support — ready for the shift.

“I don't know what will happen on Tuesday but it won't be a working system that goes smoothly and does everything they advertised for it," Gerard said. "Even if it was, it would really have to prove itself, show it can really work with no fees”.

Salvadorans appear skeptical as well. Face-to-face opinion surveys by three well-known local pollsters in recent weeks all found opposition to the plan, ranging from a slight majority to about two-thirds rejecting use of Bitcoin as legal currency.

In San Salvador, bank employee Marina Escalante, 39, said she will download the application but isn't sure how much she'll use it.

“I am going to download the application to get the $30 in Bitcoin, but I don't know if I will continue using it,” she said.

Some immigrants are worried that they would have to enter personal information into the app. Others complain there's a lack of information about the system.

Díaz, the Salvadoran in Maryland, still has many questions.

“Do I need to have cryptocurrency to send remittances or just download the application?" he asked.

The volatility of cryptocurrency also worries him. A full bitcoin was worth about $65,000 in April. Two months later, it fell to half that. It's now up around $50,000. The government expects people to make millions of transactions in tiny fractions of each coin.

“Bitcoin goes up, goes down. Then how is that going to affect our people?” asked Diaz, who works at a union for construction workers and sometimes sends remittances to his mother-in-law, other relatives and friends.

Remittances are key to the Salvadoran economy: They represent about a quarter of the country's gross domestic product and support nearly a fifth of El Salvador's households, according to The United Nations Economic Commission for Latin America and the Caribbean. Much of that money goes to basic needs like food, health and housing.

In 2020, El Salvador received nearly $5.9 billion in remittances from abroad — the vast majority of it from the U.S., according to the Central Reserve Bank of El Salvador.

Bukele has said that Bitcoin will save Salvadorans $400 million annually in remittance fees.

Many experts, however, doubt the extent of those savings, saying companies now charge an average of $8 — about 2.6% — for every $300 sent through a well-functioning system that handles more than 1 million transactions a month.

Manuel Orozco, director of the Center for Migration and Economic Stabilization at Creative Associates International, noted that the government plan to run its own dollar-dispensing teller machines will have its own costs.

International agencies such as the World Bank so far have kept their distance.

“While the government did approach us for assistance on Bitcoin, this is not something the World Bank can support given the environmental and transparency shortcomings,” said a spokesperson who asked not to be identified according to the institution's policies.

Bitcoin has also been criticized because of the huge amounts of energy it consumes as so-called “miners” use electricity to process the blockchain transactions in order to earn bitcoins themselves.

That doesn't bother Justo, the Salvadoran in Chicago. He said he is not a supporter of Bukele, but thinks the Bitcoin law will be a success.

“It has the backing of the government so there is not much to worry about,” he said.

Aleman reported from San Salvador and Torrens from New York.