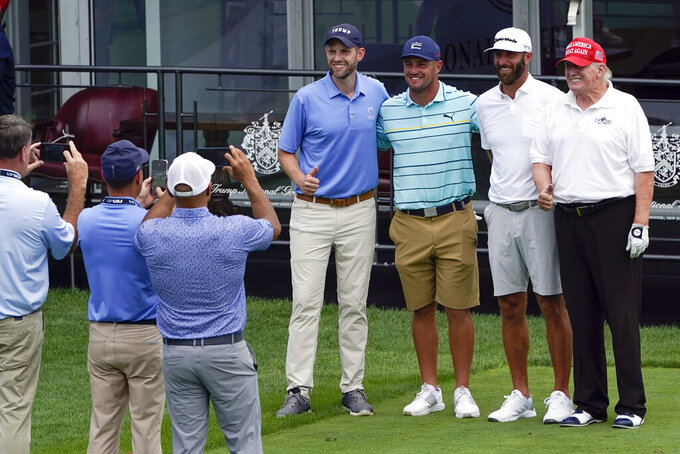 McIlroy was asked at the U.S. Open if he had lost respect for players in their prime years who were taking guaranteed cash from Saudi-funded LIV Golf, with its 54-hole events and 48-man fields, no cut and not much of an audience.

“I don’t understand for the guys that are a similar age to me going because I would like to believe that my best days are still ahead of me, and I think theirs are, too,” McIlroy said. “So that’s where it feels like you’re taking the easy way out.”

At the British Open a month later, Woods left little doubt where he stood on players who had defected to the rival league run by Greg Norman.

“I disagree with it," Woods said. “I think what they've done is they've turned their back on what has allowed them to get to this position.”

Monahan didn't underestimate the threat of Saudi money or the damage it could inflict on a tour that hasn't been challenged for 50 years. Otherwise, he wouldn't have bothered with an 898-word memo in January 2020 warning players they would have to pick one league or the other, even contemplating changes to the PGA Tour's regulations if necessary.

What he underestimated was the loyalty of his players.

Too many are willing to take the easy way out.

Too many are turning their backs on the very tour that made them worth watching, all because of financial offers that turned their heads.

Deane Beman said as much in an interview with Golfweek magazine. He was the commissioner from 1974 to 1994 and largely responsible for the model that led to the PGA Tour becoming the ultimate destination in golf.

“You don’t build loyalty and appreciation into a model like we built for the tour,” Beman said. “That’s up to the integrity of the individual and the appreciation of what’s been done for them.”

Monahan leaned on the phrase “legacy, not leverage,” a clever play on words after Phil Mickelson had been exposed in a series of published comments in February that his main interest in the Saudi-backed league was to get leverage for changes on the PGA Tour he felt were long overdue.

And it's not about the bluster of playing less for more. Why else would 10 players — Carlos Ortiz has asked that his name be removed from the lawsuit, according to his manager — take the money and run to federal court in California to file an antitrust lawsuit against the PGA Tour?

Nothing motivates like money, and golf wasn't immune. Players who say they were attracted to the team concept of LIV Golf either never played in a Ryder Cup or realized they had played for the last time.

Players made choices and those should be respected. And they were, until the inevitable lawsuit filed last week that demands the right to eat fruit from every tree in the garden.

Norman speaks of finally bringing free agency to golf, leaving out the part about players signing contracts with LIV Golf that require them to play certain events.

The Saudi threat under any name was real and there wasn't much Monahan could have done to stop it, not with that much money from the Public Investment Fund at Norman's disposal.

Imagine if Monahan had listened and struck a deal years ago, before Norman got involved and turned this into a vendetta. Would the PGA Tour not have risked the wrath of a large chunk of its fan base that now criticizes every player for taking Saudi money controlled by a repressive regime with an abominable record on human rights?

Monahan should no longer be surprised by anyone who pledges support one week and leaves the next week.

That was the case with Brooks Koepka in June. He was at a Rolex function on Monday of the U.S. Open, rallying the troops to speak loudly and clearly for the PGA Tour. Then he had an offer he couldn't ignore and was gone a week later.

That was the case with Bryson DeChambeau when he wrote in February, "I want to make it very clear that as long as the best players in the world are playing the PGA Tour, so will I.” It would be interesting to know his definition of “best” since LIV Golf has only one player — Dustin Johnson — from the top 20 in the world ranking.

The PGA Tour's postseason starts this week, but not before a federal judge decides whether to allow three defectors to compete in the FedEx Cup playoffs. The fall portion of the new season will include two events in California — one a tournament in Napa, another the initial case management conference for the antitrust lawsuit.

Beman was asked by Golfweek if he could see anything positive coming from this disruption.

“Not that I see,” he said. “Maybe demasking the integrity of some individuals. Their real stripes are showing. Some of the people who have benefited enormously from what the tour has put together are fully disclosing their integrity.”

More players are likely to follow after the FedEx Cup. Rumors are flying, and those can't be trusted, either. Words have never been more hollow.

Monahan should know by now that a game built on integrity only applies inside the ropes.