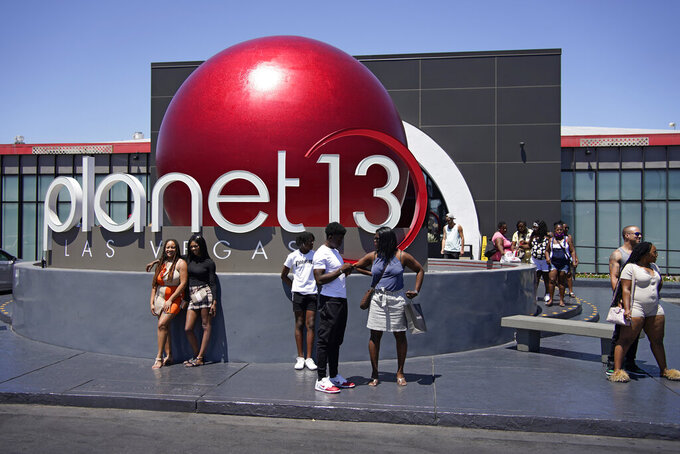 John Locher, ASSOCIATED PRESS
People stand outside of the Planet 13 cannabis dispensary Friday, June 11, 2021, in Las Vegas. A new law approved by the state Legislature and signed by Democratic Gov. Steve Sisolak paves the way for marijuana consumption lounges to open in Nevada next year. At Planet 13 dispensary near the Las Vegas Strip, plans are already being made for a consumption area. (AP Photo/John Locher)

LAS VEGAS (AP) — Roger Bloss sat parked in his vehicle near a smoking area outside a prominent Strip casino resort.

Bloss, the CEO of MJ Holdings, a Las Vegas-based company that grows cannabis in Nevada, observed dozens of people inhaling and exhaling for about an hour.

“I’d say 90% of them were obviously smoking weed,” Bloss told the Las Vegas Sun. “I feel that’s not conducive for certain kinds of tourism and I certainly think it will impact our convention business in Las Vegas Mondays through Thursdays.”

What Bloss said he witnessed isn’t an uncommon sight on the Strip, in parking garages, or downtown on Fremont Street. And if a person in the tourist corridor doesn’t see someone smoking marijuana, they’re likely to smell it at some point when outside of a building.

There soon could be another option.

A new law approved by the state Legislature and signed by Democratic Gov. Steve Sisolak paves the way for marijuana consumption lounges to open in Nevada next year.

The state’s Cannabis Compliance Board, which regulates the industry, will approve licenses for lounges at existing dispensaries and for free-standing independent businesses.

At the sprawling Planet 13 dispensary near the Las Vegas Strip plans are already being made for a consumption area.

Most customers are Las Vegas tourists. In the first quarter of this year, Planet 13 reported nearly $24 million in earnings at its Las Vegas dispensary, or about 9% of all dispensary revenue reported in Nevada for the period from Jan. 1 through March.

Soon, they could have a place to smoke.

“It’s been kind of a dream of ours to allow for consumption within this complex,” said David Farris, a spokesman for Planet 13. “Now, we’re gearing up and getting a team together to put together some solidified plans.”

The idea, Farris said, will be to build something that could potentially cater to hundreds of cannabis users and become an attraction that “rivals the Strip itself.”

Southern Nevada hosted over 42 million tourists in 2019, according to the Las Vegas Convention and Visitors Authority.

Allowing them a place to consume cannabis was one of the driving ideas behind Assembly Bill 341, sponsored by Assemblyman Steve Yeager.

“Obviously, there have been some problems with people consuming in public,” said Yeager, a Democrat and a former chief deputy public defender in Las Vegas. “Soon, there will be an answer when tourists ask where they’re allowed to consume. I also think we’ll get some tourists to come here because of that consumption lounge experience.”

Bloss said MJ Holdings will explore the possibilities surrounding a consumption area in Las Vegas that would “encompass the health, wellness and social side” of the cannabis market.

Since federal law still recognizes marijuana as an illegal drug, it’s doubtful that major casino companies and other gambling license-holders in the Las Vegas area will have on-property consumption lounges.

Citing federal law, the Nevada Gaming Control Board in 2018 required that licensees “shall not participate in the marijuana industry.”

He called the smell of marijuana too pungent for casino floors and said people won’t be able to smoke a joint at gambling tables.

Layke Martin, executive director of the Nevada Dispensary Association, said she hopes to see license applications available late this year or early in 2022.

“There are about a dozen dispensaries in Clark County that have the space — or are acquiring the space — for a lounge,” Martin said. “The hope is that some of these places will end up being destinations in and of themselves. Maybe it’s a video game venue with cannabis, or a comedy club, but we see some new and interesting concepts coming from this.”

The law will ban dispensary owners from operating a stand-alone consumption lounge that isn’t located inside an existing cannabis store. Alcohol sales will not be permitted in any consumption lounge, though single-use cannabis products will be allowed to be sold.

The compliance board is expected to issue 20 independent lounge licenses, half of which will be reserved for “social equity applicants,” which is defined as any applicant who has been “adversely affected by provisions of previous laws which criminalize activity relating to cannabis.”

“We really contemplated how to increase the inclusivity and diversity in the cannabis industry in Nevada,” Martin said.

Just like with dispensaries, free-standing consumption lounges will need to be at least 1,500 feet (457 meters) from any casino with an unrestricted gaming license, 1,000 feet (305 meters) from a school and at least 300 feet (91 meters) from a “community facility.”

Simon Nankervis, CEO of The Source, which has dispensaries in Las Vegas, Henderson, Reno and North Las Vegas, said the company could add lounge space at an additional dispensary that is still in the planning stages, assuming it’s granted the appropriate green light from the compliance board.

The Source tends to cater to local residents, although it also sells to tourists. He said any lounge would likely fit two or three dozen people at capacity -- smaller than what Planet 13 officials have in the works.

“We should be able to have a better way of controlling how cannabis is used now,” Nankervis said. “We know that tourists are using on the Strip and on Fremont Street. I think this (legislation) will change the way we, as an industry, think about the market.”

It’s the next step, he said, for a maturing cannabis industry in Nevada, which legalized recreational cannabis in 2017.

Colorado, which legalized recreational marijuana in 2012, allows for legal consumption lounges, as does California, but the coronavirus pandemic made it difficult for businesses to flourish.

“If you look at the markets that are more developed, like Colorado and California, they’ve had consumption lounges for some time now, and that creates an environment where things are more controlled,” Nankervis said. “This law in Nevada puts us in a place as an industry where we’re on par with our neighbors.”

For Yeager, Sisolak’s signature marked the end of a year-long process.

“What we could see here in Las Vegas could be better than Amsterdam,” Yeager said. “I can’t tell you how many people I talked to from the cannabis industry, the Chamber of Cannabis, gaming, the governor’s folks, and those looking to get into the industry. In the end, we got more support than I thought we’d get.”