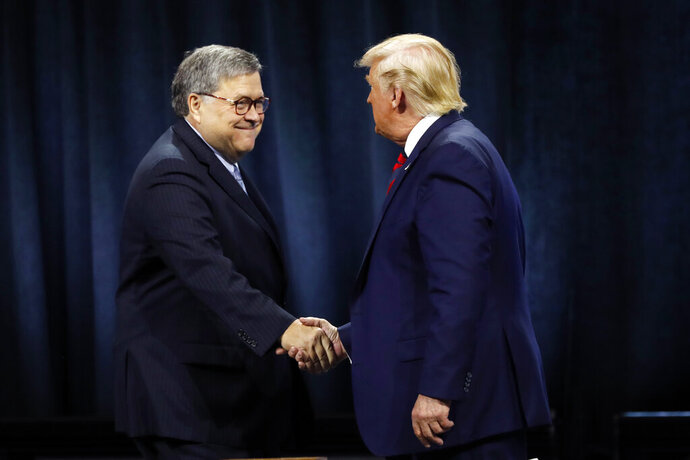 FILE - In this Oct. 28, 2019, file photo, President Donald Trump shakes hands with Attorney General William Barr before Trump signed an executive order creating a commission to study law enforcement and justice at the International Association of Chiefs of Police Convention in Chicago. Attorney General William Barr took a public swipe Thursday at President Donald Trump, saying that the president’s tweets about Justice Department prosecutors and cases “make it impossible for me to do my job.” Barr made the comment during an interview with ABC News just days after the Justice Department overruled its own prosecutors. they had initially recommended in a court filing that President Donald Trump’s longtime ally and confidant Roger Stone be sentenced to 7 to 9 years in prison. But the next day, the Justice Department took the extraordinary step of lowering the amount of prison time it would seek for Stone. (AP Photo/Charles Rex Arbogast, File) 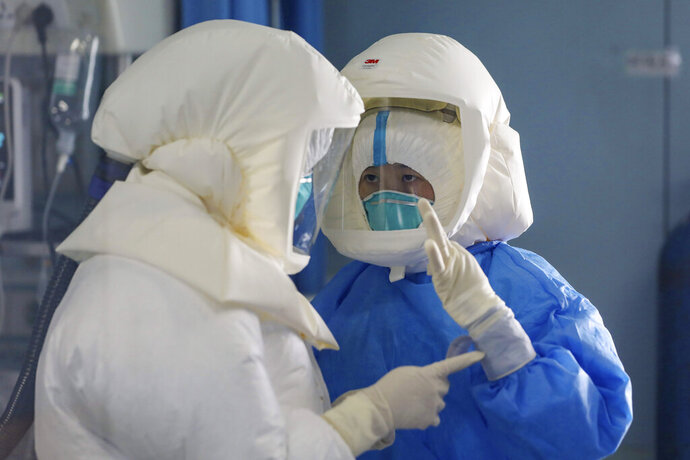 Medical staff work in the negative-pressure isolation ward in Jinyintan Hospital, designated for critical COVID-19 patients, in Wuhan in central China's Hubei province Thursday, Feb. 13, 2020. China on Thursday reported 254 new deaths and a spike in virus cases of 15,152, after the hardest-hit province of Hubei applied a new classification system that broadens the scope of diagnoses for the outbreak, which has spread to more than 20 countries. (Chinatopix Via AP) 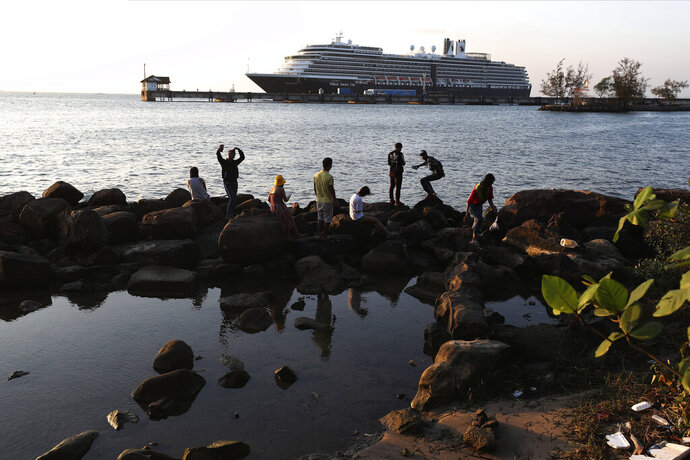 Locals come down to view the Westerdam cruise ship, owned by Holland America Line, docked at the port of Sihanoukville, Cambodia, Thursday, Feb. 13, 2020. The Westerdam, turned away by four Asian and Pacific governments due to virus fears, anchored Thursday off Cambodia for health checks on its 2,200 passengers and crew. (AP Photo/Heng Sinith) 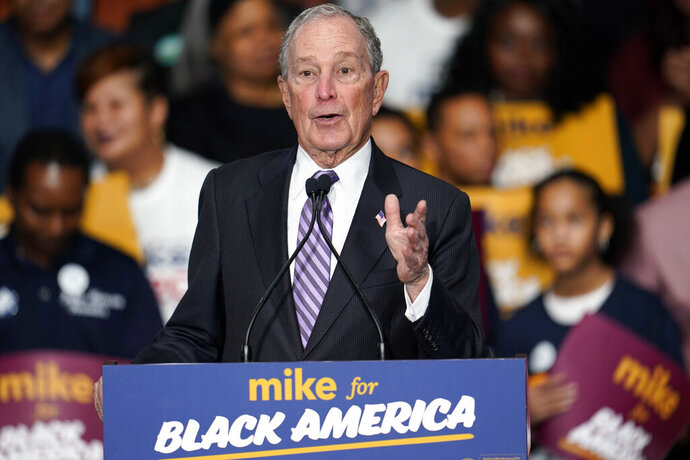 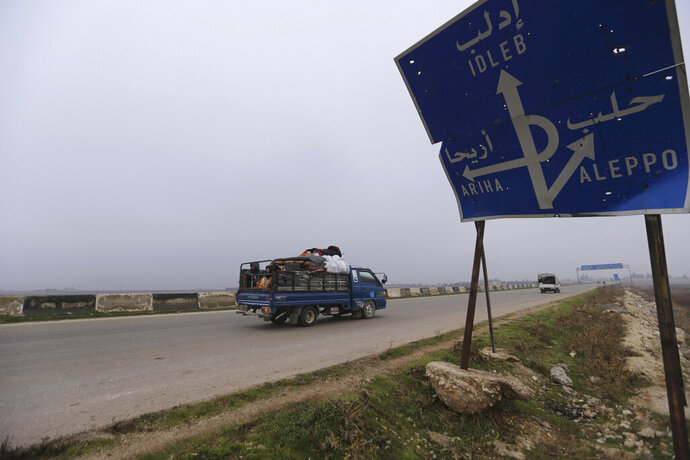 FILE - This Monday, Dec. 23, 2019, file photo, civilians ride in a truck as they flee Maaret al-Numan, Syria, ahead of a government offensive. The M5 highway, recaptured by President Bashar Assad’s forces this week, is arguably the most coveted prize in Syria’s civil war. The strategic highway is vital for Syria’s economy as well as for moving troops. (AP Photo/Ghaith Alsayed, File) 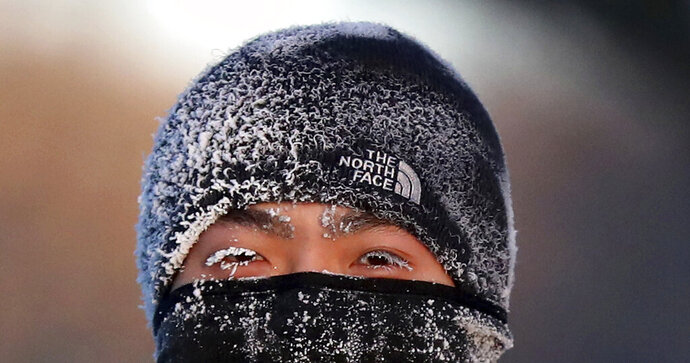 A runner wears the cold on his face while running along West River Parkway hills Thursday, Feb. 13, 2020, near downtown Minneapolis, with temperatures hovering near minus 30 degrees Fahrenheit with wind chills. (David Joles/Star Tribune via AP) 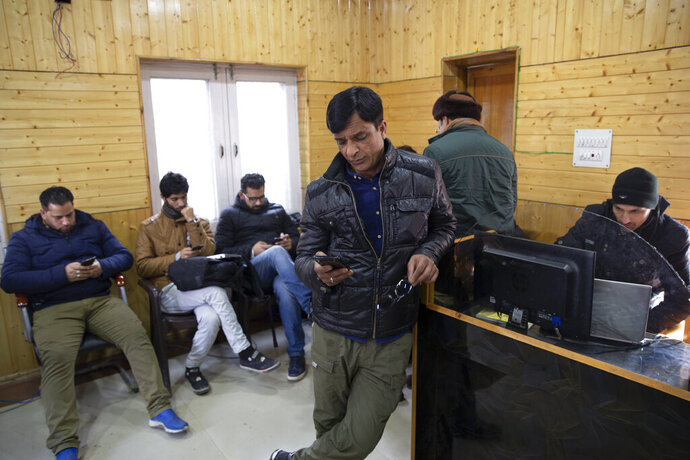 In this Jan. 30, 2020, photo, Kashmiri journalists browse the internet on their mobile phones inside the media center set up by government authorities in Srinagar, Indian controlled Kashmir. Six months after India stripped restive Kashmir of its semi-autonomy, enforcing a total communications blackout, it has restored limited internet at slow speeds with access only to government-approved websites. Since Modi came into power in 2014, the internet has been suspended more than 365 times in India, according to the global digital rights group Access Now. (AP Photo/ Dar Yasin) 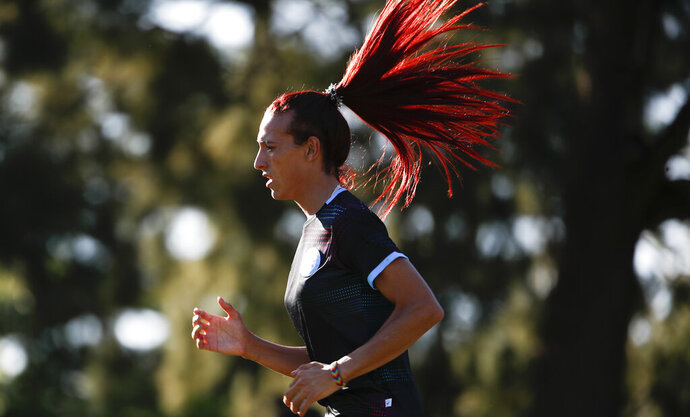 Soccer player Mara Gomez trains with her first division women's soccer team, Villa San Carlos, in La Plata, Argentina, Wednesday, Feb. 12, 2020. Gomez is a transgender woman who is limited to only training with her team while she waits for permission to start playing from the Argentina Football Association (AFA). If approved, she would become the first trans woman to compete in a first division, professional Argentine AFA tournament. (AP Photo/Natacha Pisarenko) 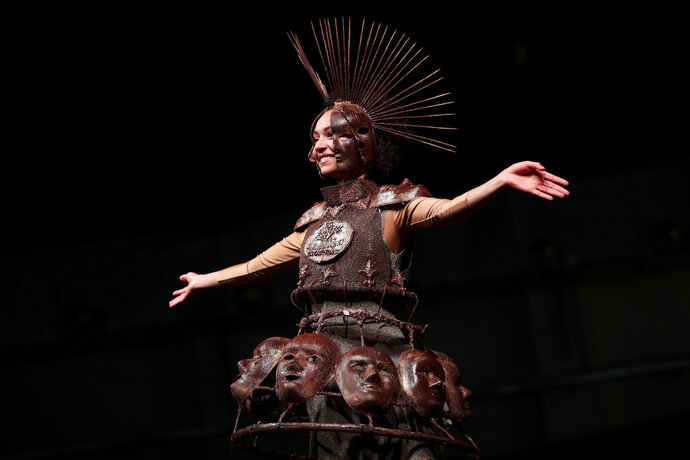 A model displays a design partially made of chocolate in a fashion show during an annual chocolate festival in Brussels, Thursday, Feb. 13, 2020. (AP Photo/Francisco Seco) 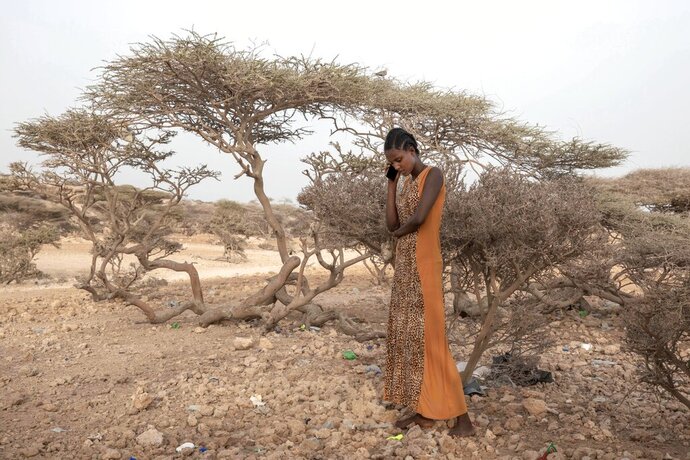 In this July 15, 2019 photo, 16-year old Hades, an Ethiopian Tigray migrant, makes a phone call to her mother in Ethiopia, as she takes shelter under trees at the last stop of her journey before leaving by boat to Yemen in the evening, in Obock, Djibouti. Hades did not know that there is a civil war in Yemen. She was told by her guide that women are safe in homes of their employers in Saudi Arabia and that she would not face deportation. She will speak to her mother again to ask for money after she arrives in Yemen. (AP Photo/Nariman El-Mofty)