Skip to main content
AP-US-Election-2020-America-Disrupted-Economy, 2nd Ld-Writethru
Back to Story 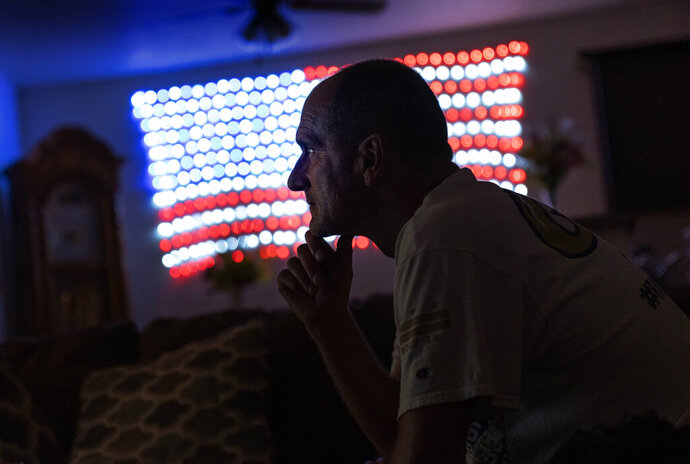 Scott Rice sits in his living room watching a Fox News Channel interview with President Donald Trump in Appleton, Wis., Aug. 20, 2020. Nothing can shake Rice's faith that Trump will save the U.S. economy, not seeing businesses close or friends furloughed, not even his own hellish bout with the coronavirus. But in Appleton, a city of 75,000 people along the Fox River, the health of economy isn't judged on jobs numbers, personal bank accounts or union contracts. Instead, it's viewed through partisan lenses, filtered through the facts voters want to see and hear, and those they don't. (AP Photo/David Goldman) 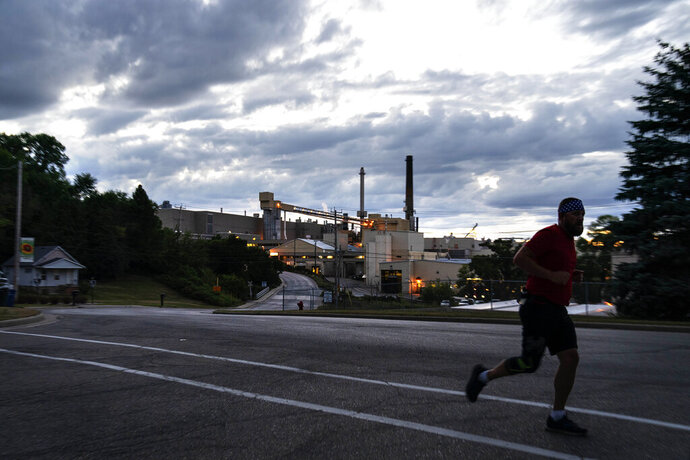 CORRECTS CITY TO COMBINED LOCKS, WIS. A jogger runs past the Midwest Paper Group mill in Combined Locks, Wis., part of the greater Appleton area, Monday, Aug. 17, 2020. By almost any measure, President Donald Trump's promises of an economic revival in places like Appleton have gone unfulfilled. The area has lost about 8,000 jobs since he got elected. The state that is vital for Trump's victory had more jobs a decade ago when the country was still ailing from the Great Recession than it did in July.(AP Photo/David Goldman) 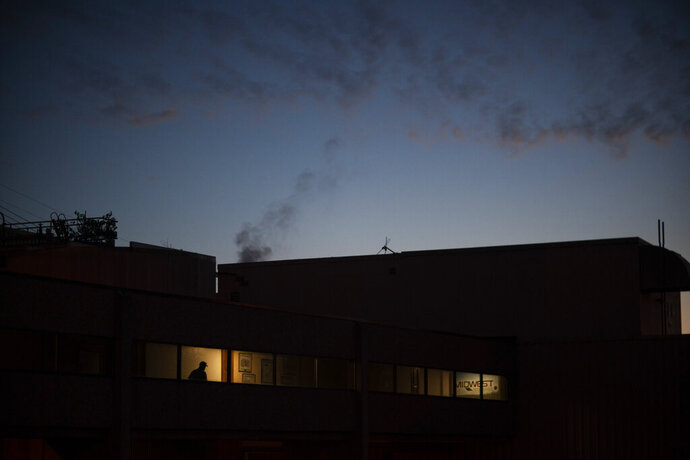 CORRECTS CITY TO COMBINED LOCKS, WIS. An employee walks in to Midwest Paper Group mill for a morning shift in Combined Locks, Wis., part of the greater Appleton area, Aug. 18, 2020. At the mill, there is a story of recovery, but one where credit lay with the union and the county executive, not with President Donald Trump. As the need for white paper waned, more than 600 workers were handed pink slips in anticipation of it being shuttered. Instead, the mill added new machines to make materials for cardboard, capitalizing on the growing number of people shopping online at Amazon. (AP Photo/David Goldman) 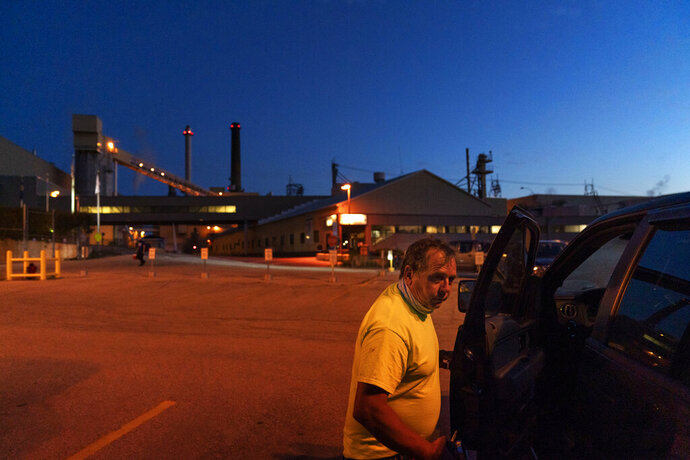 CORRECTS CITY TO COMBINED LOCKS, WIS. Tom Becker leaves after an overnight shift at the Midwest Paper Group mill in Combined Locks, Wis., part of the greater Appleton area where nearly one in five jobs are still in factories Aug. 18, 2020. Between 2001 and 2016, Wisconsin's paper industry lost 15,000 jobs. (AP Photo/David Goldman) 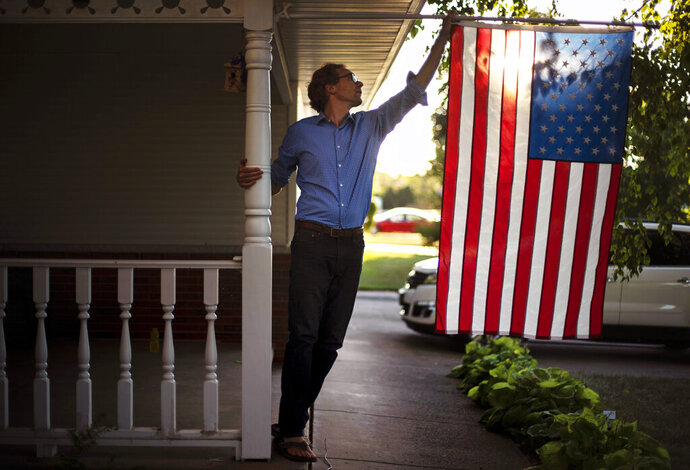 Outagamie County Executive Tom Nelson adjusts the American flag hanging off his front porch in Appleton, Wis., Aug. 18, 2020. By his estimate, the county would have lost a catastrophic 2,000 jobs as collateral damage if the Midwest Paper Group mill closed. Nelson, the workers and their union representation lobbied the bankruptcy court and struck a deal. "If it were not for the fact that the mill was unionized, it would be a trash heap," Nelson said. (AP Photo/David Goldman) 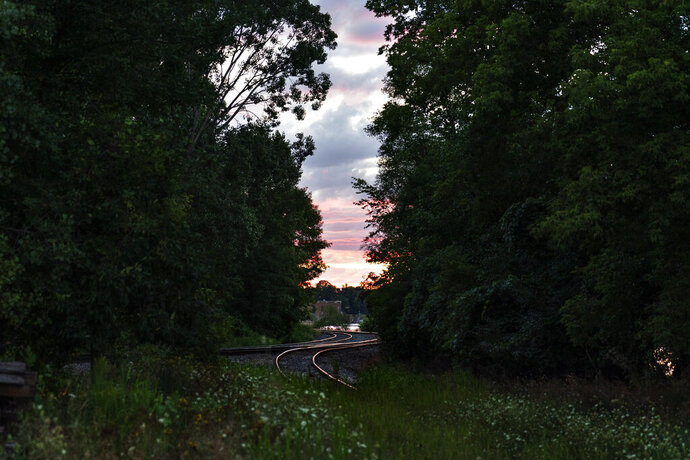 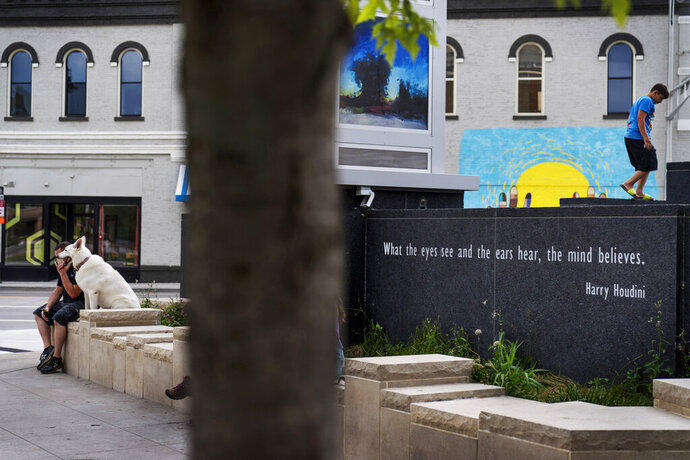 Houdini Plaza, named after Appleton's most famous son, world famous illusionist Harry Houdini, sits in the center of downtown Appleton, Wis., Aug. 20, 2020. The lines inscribed on the monument from the celebrated escape artist are, "What the eyes see and the ears hear, the mind believes." Here, feelings about the economy do not come from job numbers, union contracts or bonuses. They come from an emotion, a psychological phenomenon that separates the believers and doubters of the president. (AP Photo/David Goldman) 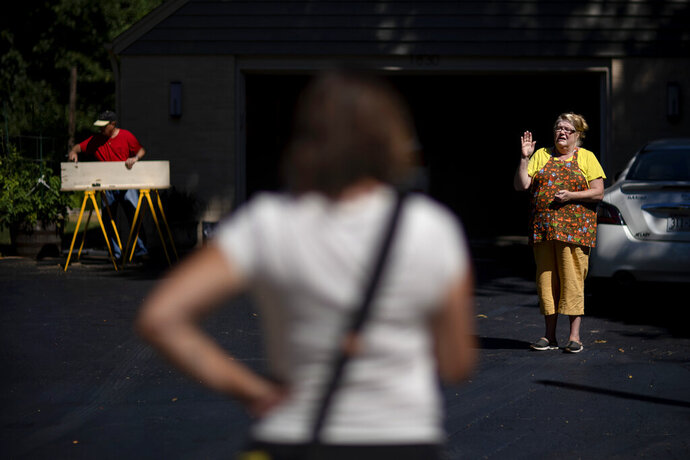 Lee Snodgrass, center, chair of the local Democratic party who is also running for a seat in the state legislature, talks with Candice Meyer, right, outside her home as Snodgrass knocks on doors campaigning Aug. 18, 2020, in Appleton, Wis. Snodgrass walked through a neighborhood that leans for President Donald Trump. She could recite facts about the economy and the pandemic, several millions jobs lost, a rising body count and Republicans, like Meyer, would  defend Trump. (AP Photo/David Goldman) 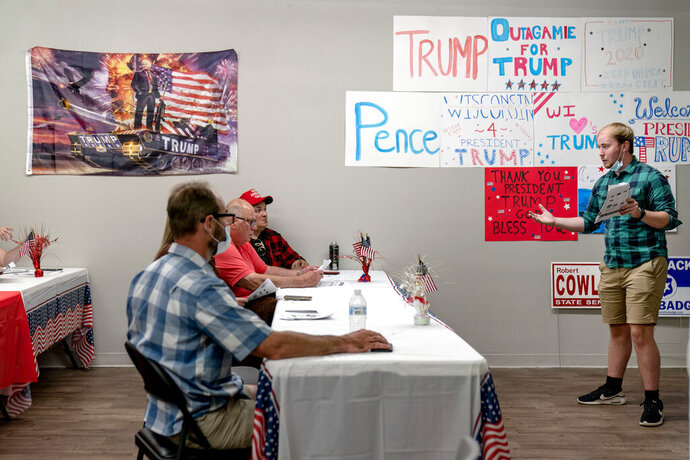 Ryan Retza, right, Trump Victory regional field director, leads volunteers in a training event at a campaign office in Appleton, Wis., Aug. 20, 2020. Republicans here say that President Donald Trump propelled the country to new heights with tax and regulatory cuts, only to be brought low by the force majeure of a virus, and that most voters will hold him blameless. (AP Photo/David Goldman) 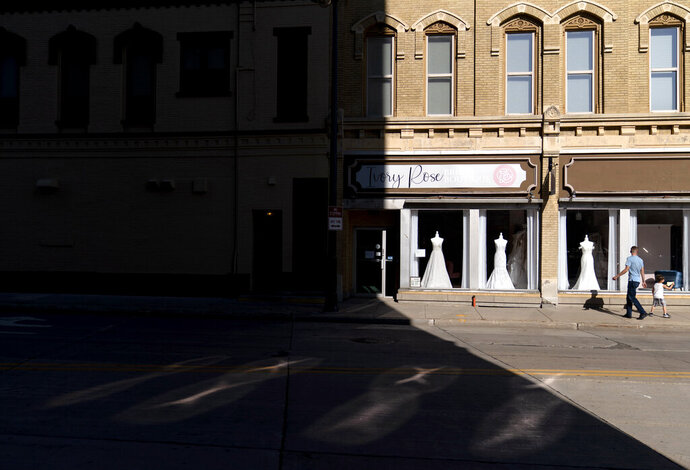 A father and son walk past a wedding gown shop in Appleton, Wis., Aug. 19, 2020. The downtown had been evolving as young parents moved back to Wisconsin from Minneapolis and Chicago, just to raise kids and open a business. Restaurants and boutiques popped up along College Avenue, catering to the professors and students at Lawrence University. Then the pandemic struck. (AP Photo/David Goldman) 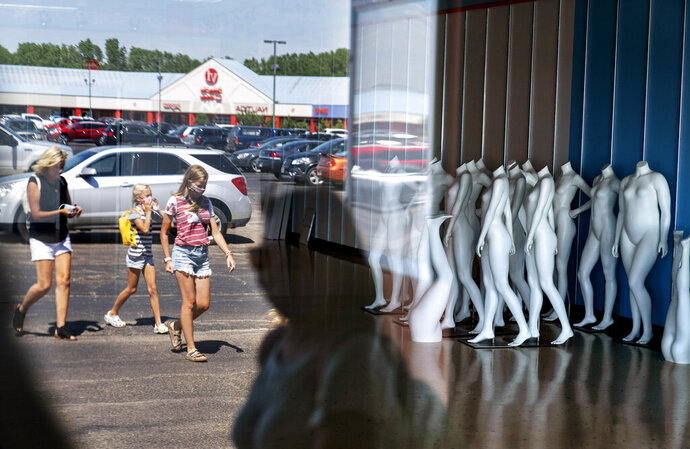 Mannequins stand in an empty store as shoppers visit outlet shops in Oshkosh, Wis., part of the greater Appleton area, Aug. 20, 2020. Storefronts after the pandemic have been emptied at the Oshkosh Outlets, including the nearby Brooks Brothers, the haberdashery for generations of presidents, that filed for bankruptcy this year. (AP Photo/David Goldman) 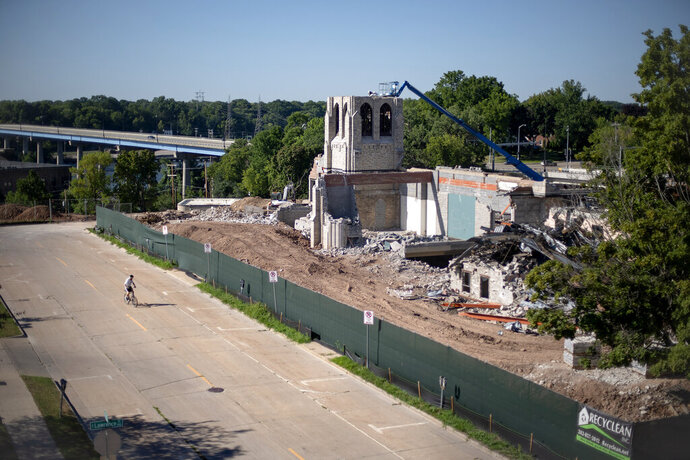 A church is demolished where the oil services firm U.S. Ventures announced it would build a new headquarters employing 500 people on a city bluff in Appleton, Wis., Aug. 19, 2020. Then the coronavirus pandemic struck. The status of the U.S. Ventures headquarters is now uncertain, but even as the old church on the bluff gets demolished for a groundbreaking the headquarters certainly won't open as announced in 2022. (AP Photo/David Goldman) 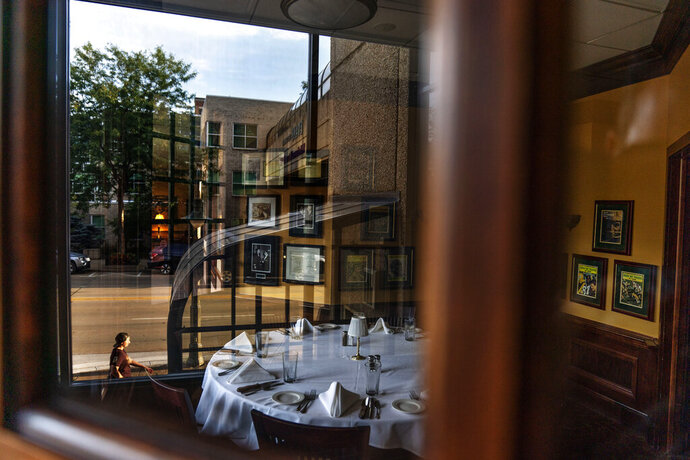 A set table sits empty inside the closed Vince Lombardi's Steakhouse in Appleton, Wis., Aug. 20, 2020. Appleton is testimony to the lack of simple solutions to the coronavirus pandemic. Nearly 40% of the city's leisure and hospitality jobs have been lost. Restaurants have been closed, hotels vacant. (AP Photo/David Goldman) 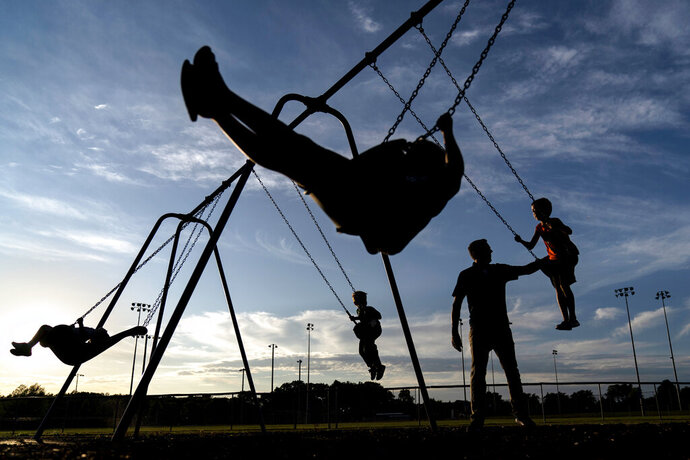 State Republican Sen. Roger Roth, pushes his four sons on a park's swing set in Appleton, Wis., Aug. 19, 2020. Republicans here say there is proof that their playbook of aiding companies with tax breaks can protect jobs and provide a foundation for growth. They point to the saving of the nearby Kimberly-Clark plant in Cold Springs through tax incentives and union concessions. "It's bigger than just 400 jobs, it's the footprint of 198 other businesses, a whole ecosystem," Roth said. (AP Photo/David Goldman) 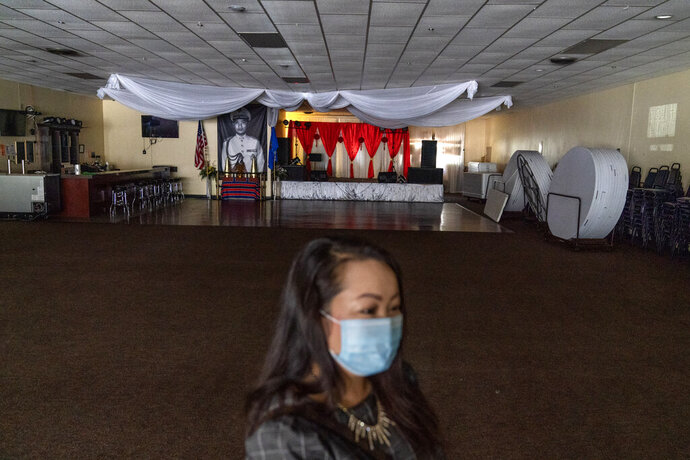 Businesswoman and city councilor, Maiyoua Thao, 43, stands in the virus-shuttered banquet hall that serves the area's 5,000 Hmong immigrants, Aug. 19, 2020, in Appleton, Wis. Thao, a Hmong refugee from Laos, was initially drawn to the President Donald Trump mythology. She read his books and stayed in his hotel. But his administration has irked her by slashing the admission of refugees this year. She refuses to weigh in on national politics, saying that doing so could alienate the residents she serves. "I just want to see us Americans continue to be powerful and to be the heroes to the world." (AP Photo/David Goldman) 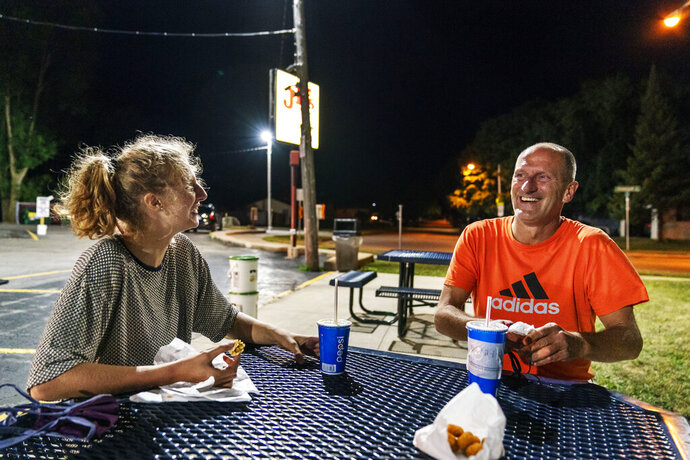 Scott Rice, right, laughs with his daughter, Cassidy, 20, over burgers at JD's on her last night before she returns to college, Aug. 20, 2020, in Appleton, Wis. Rice concedes that the economy is not just an argument for President Donald Trump, it's also an argument against him. His daughter tells him so. She is studying public health at George Washington University and will cast her first presidential vote for Biden. "The fact that there was a pandemic and the fact that it had those consequences on the economy should be an eye opener, like, hey, maybe we're not doing this correctly," she said. (AP Photo/David Goldman) 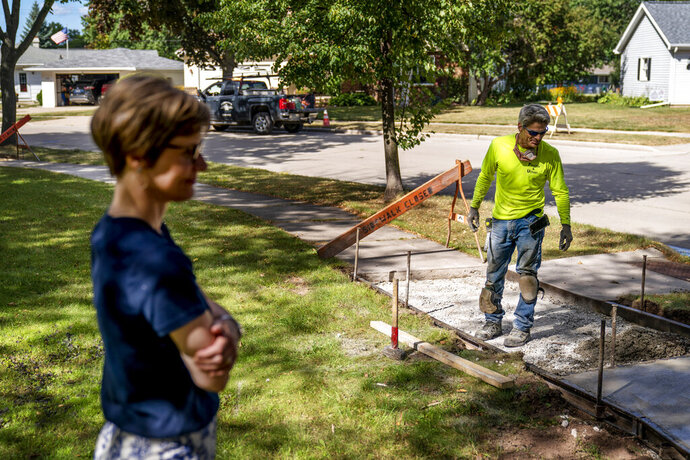 Trisha Kostelny, left, who runs Fischer Ulman Construction with her husband, John, right, looks over their sidewalk concrete project in Appleton, Wis., Aug. 18, 2020. The couple are struggling to find workers. The President Donald Trump administration argues the problem is that the government has been too generous with laid-off workers. But to Trisha Kostelny, the problem is that workers need even more help from the government. (AP Photo/David Goldman) 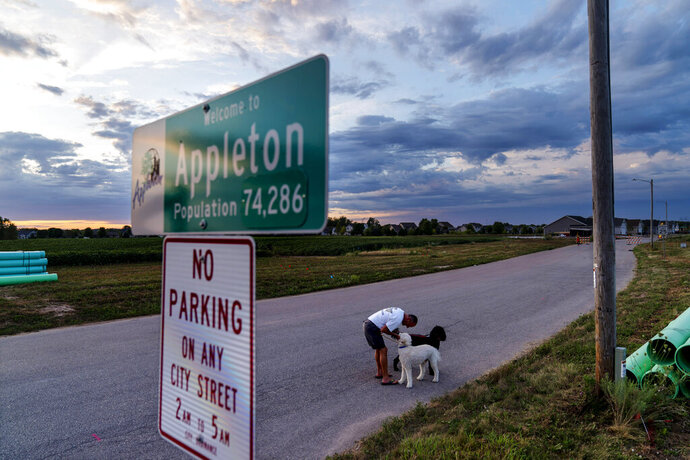 Scott Rice walks his dogs through a construction development of new homes near his apartment in Appleton, Wis., Aug. 20, 2020. Rice was a virus skeptic. But then the disease seeped into the paper mill where he works, and he suddenly lost his appetite. He lay in bed drenched in sweat. His body seemed at war with itself. After 16 days at home, Rice told his co-workers that the disease was scary and real. But President Donald Trump held onto his vote for one reason: the stock market was climbing. "The 401ks, just the economy," Rice said. "He got jobs going. Just accumulated a lot of jobs, being a businessman." (AP Photo/David Goldman) 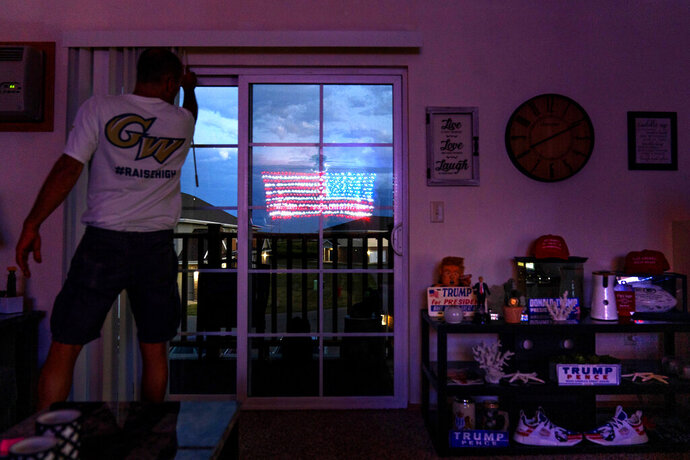 An illuminated American flag is reflected in the balcony door of Scott Rice's apartment in Appleton, Wis., Aug. 20, 2020. Rice reveres the president the way Wisconsin loves the Green Bay Packers. He has painted "T-R-U-M-P" on his lawn, spelled it out with Christmas lights on his roof and painted it on his steel-toed shoes. (AP Photo/David Goldman) 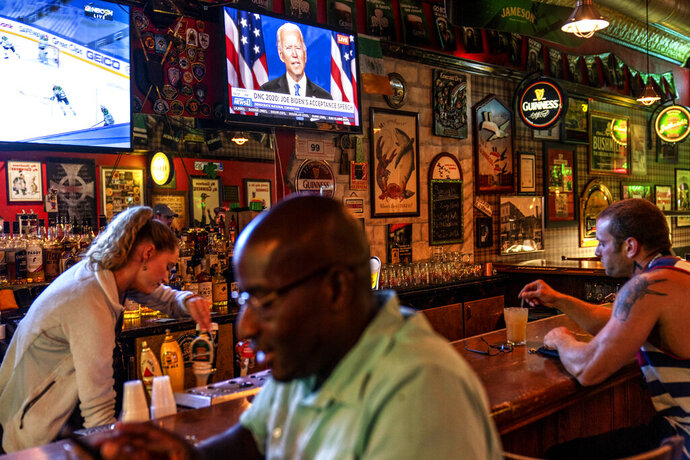 A broadcast of Democratic presidential candidate former Vice President Joe Biden speaking at the Democratic National Convention plays on a television at The Durty Leprechaun in Appleton, Wis., Aug. 20, 2020. Donald Trump won the presidency by wringing tens of thousands of votes out of small towns and medium-sized cities in Wisconsin, Michigan and Pennsylvania. How enduring the divide will be is one of the central tests of the presidential election. Will emotional ties to Trump override assessments of his job performance? (AP Photo/David Goldman) 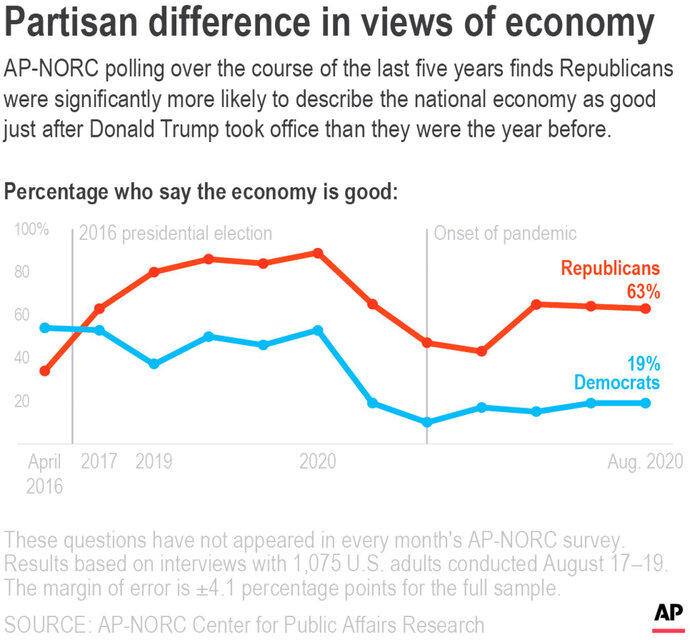 AP-NORC polling over the course of the last five years finds Republicans were significantly more likely to describe the national economy as good just after Donald Trump took office than they were the year before. ; 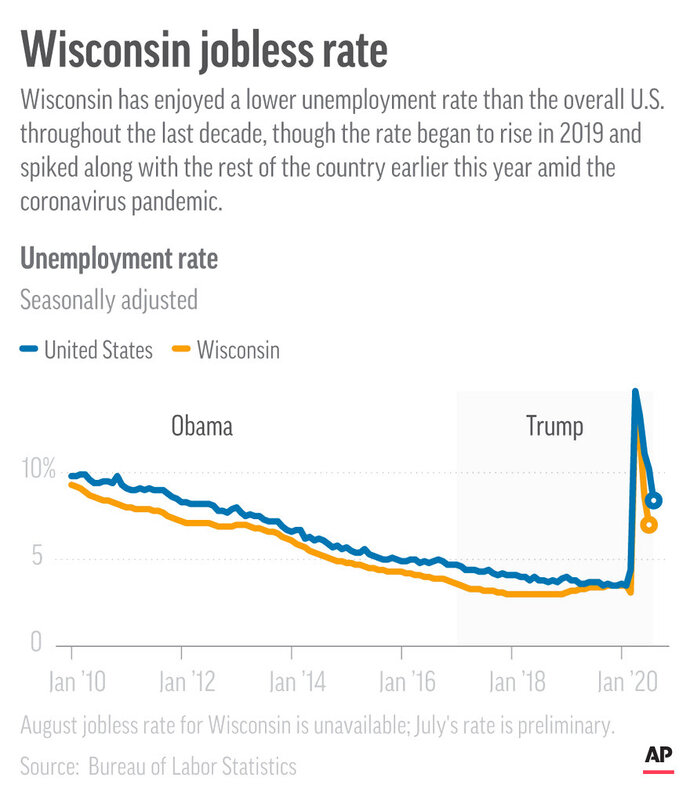 The unemployment rate for Wisconsin and overall U.S. since 2010.;