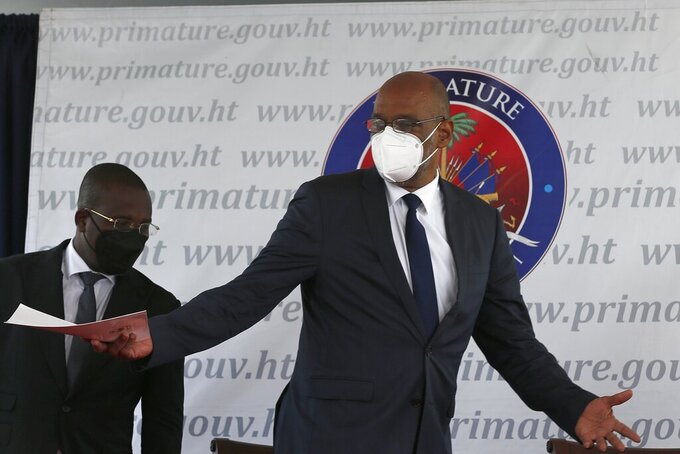 Joseph Odelyn, ASSOCIATED PRESS
FILE - In this July 20, 2021 file photo, Haiti's designated Prime Minister Ariel Henry gestures during his appointment ceremony in Port-au-Prince, Haiti, weeks after the assassination of President Jovenel Moise on July 7 at his home. Haiti’s Office of Citizen Protection is demanding on Monday, Sept. 13, 2021, that Prime Minister Henry step down as authorities seek to interview him about telephone calls he allegedly had with a key suspect in the president’s assassination. (AP Photo/Joseph Odelyn, File)

PORT-AU-PRINCE, Haiti (AP) — Haiti’s Office of Citizen Protection posted a video Monday demanding that Prime Minister Ariel Henry step down as authorities seek to interview him about telephone calls he allegedly had with a key suspect in the president’s assassination.

Attorney Renan Hédouville, who directs the ombudsman-like office, said Henry should appear at the public prosecutor’s office as requested to help shed light on the July 7 killing of Jovenel Moïse at his private home. He described the office’s decision to call for Henry’s resignation as “objective and courageous” and it also urged the international community to stop supporting Henry.

“We would all love to know the content of that conversation,” Hédouville said of the reported calls between Henry and Joseph Badio, a fugitive who once worked at Haiti’s Ministry of Justice and at the government’s anti-corruption unit until he was fired in May amid accusations of violating unspecified ethical rules.

On Friday, Bedford Claude, chief prosecutor for the capital of Port-au-Prince, issued a letter to Henry asking to meet with him this week if the prime minister agreed. Claude said he has evidence that the men talked twice in the pre-dawn hours shortly after the assassination and was seeking details about the content of those phone calls.

“The prime minister cannot remain in his post without clearing up these dark areas,” Hédouville said. “He must wash away all suspicion.”

Also on Monday, Haitian Justice Minister Rockfeller Vincent issued a strongly worded letter to the chief of Haiti’s National Police demanding he immediately increase security for Claude, whom he said had received “important and disturbing” threats in the past five days.

Vincent also ordered Police Chief Léon Charles to tell all officers not to carry out any political orders without basis, especially those that might be illegal. He did not elaborate and could not be immediately reached for comment.

Henry has not directly addressed Claude’s letter in public, but during a meeting with political leaders Saturday to sign an accord, he said he would keep pushing to help stabilize Haiti.

“Rest assured that no distraction, no summons or invitation, no maneuver, no threat, no rearguard combat, no aggression will distract me from my mission,” Henry said. “The real culprits, the intellectual authors and co-author and sponsor of the assassination of President Jovenel Moïse will be found and brought to justice and punished for their crimes.”

More than 40 suspects have been arrested in the case, including 18 former Colombian soldiers. Authorities are still looking for additional suspects, including Badio and a former Haitian senator.

The justice minister tweeted last week that people he did not identify were trying to control Haitian judges, prosecutors and other officials to help cover up for those involved in the killing and to persecute political adversaries.

“With me, that macabre plan will remain an illusion,” Vincent wrote.