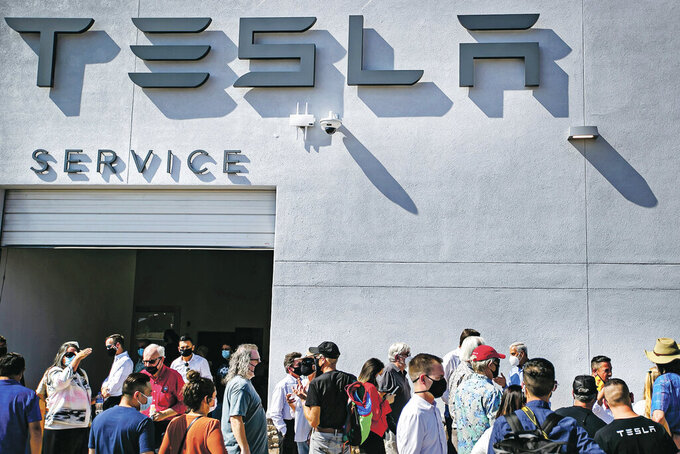 Jim Weber, ASSOCIATED PRESS
Tesla owners, Tesla employees and local political leaders gather at the service bay doors during an event on Sept. 9, 2021, to celebrate a partnership between Tesla and the Nambé Pueblo after the electric car company repurposed a defunct casino into a sales, service and delivery center near Santa Fe, N.M. Tesla has opened a store on tribal land in New Mexico, sidestepping car dealership laws that prohibit car companies from selling directly to customers. (Jim Weber/Santa Fe New Mexican via AP)

SANTA FE, N.M. (AP) — A recently retired state Cabinet secretary who oversaw New Mexico's first major foray into electric vehicles for government fleets has gone to work at a lobbying group for automotive dealerships as they safeguard state-authorized control over direct sales of new vehicles from incursions by electric-car maker Tesla and other potential rivals.

Ken Ortiz retired in June as secretary of the General Services Department. He has begun work as president of the New Mexico Automotive Dealers Association by publicly defending New Mexico's ban on direct sales of motor vehicles and highlighting local employment provided by auto dealerships.

Tesla forged a route around the state's direct-sales prohibition last month as it opened a store and repair shop on autonomous Native American land at Nambé Pueblo in northern New Mexico. It marked a new approach in Tesla's yearslong fight to sell cars directly to consumers and cut dealerships out of the process.

The company led by business magnate Elon Musk can sell and service its vehicles freely in only about a dozen states.

In commentary delivered this week to news outlets, Ortiz asserted that new-car dealerships — and not direct-to-consumer manufacturers — are best equipped to deploy electric vehicles and speed the transition to cleaner transportation in response to climate change.

Contacted by phone, Ortiz said Tesla "is not really the issue.”

He added: “We just feel that with the existing franchise law, outside of the sovereign nations, that dealers are there for a reason. We’re imbedded in local communities, we’re contributing to state tax dollars, with payroll.”

“The perception this creates, on the heels of the Tesla deal, is concerning,” Ferguson said. “Each one of these things chips away at the state’s national reputation as to whether businesses can come in and get a fair shake. It hurts our economy.”

Proposals to allow direct vehicle sales without a dealership have met with rejection by the state Legislature, as recently as 2019.

New Mexico Gov. Michelle Lujan Grisham said Thursday through a spokeswoman that she would support reforms to the state’s statutory prohibition on direct new vehicle sales if initiated and approved by the Legislature.

Ortiz carved out a reputation as a trusted and skilled public administrator in state government under Democratic and Republican elected leaders, with roles ranging from motor vehicle division director to secretary of the state labor agency.

Under Ortiz, the agency also introduced plug-in electric vehicles to the state fleet — and negotiated standardized pricing for government agencies with local automotive dealerships for the electric Chevy Bolt and Nissan Leaf, models chosen for compatibility.

Ortiz said he was at least two steps removed from those negotiations with dealerships.

“So far I haven’t registered as a lobbyist yet because I have done no work with legislators,” Ortiz noted.

Ethics laws in most states provide a mandatory waiting period before someone leaving public office can engage in lobbying or register as a lobbyist.

Concerns about the revolving door between government and industry surfaced in 2016 when Ryan Flynn became executive director of the New Mexico Oil and Gas Association weeks after leaving his job as Environment Department secretary under then-Gov. Susana Martinez, a Republican.

Lujan Grisham spokeswomen Nora Meyers Sackett said Thursday the governor would support some sort of additional “cool off” period if brought forward and approved by the Legislature.