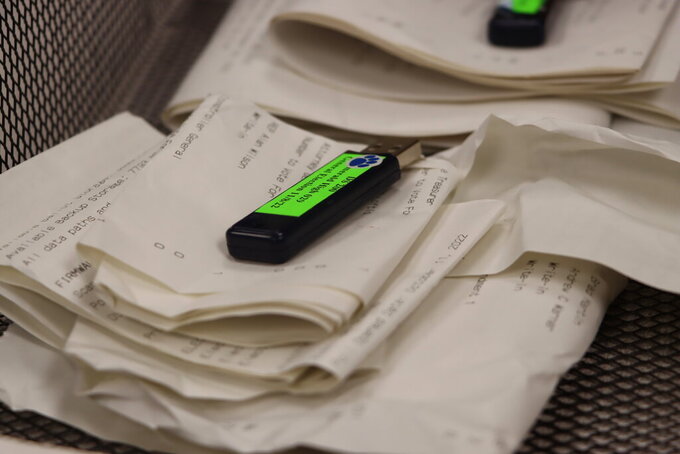 GREENWOOD, S.C. (AP) — Before the flurry of action, there was quiet anticipation.

Greenwood County’s Voter Registration and Election staff, board members and volunteers stood at the ready Tuesday night. As the clock struck 7 p.m., they waited in the Park Plaza parking lot with empty metal shelves lined up behind them.

Poll managers from throughout the county would begin streaming in any moment, delivering black bags containing the ballot-marking machines voters used all day, blue cases with the e-vote computers used for checking voters’ registrations and ballot boxes filled with the paper ballots scanned into flash drives that are used to tally every vote cast that day.

But until those trucks pulled up those workers patiently waited, chatting about the day. Amid chit-chat about the weather, county elections board Chairperson Derwin Sthare told a story about a few dozen Greenwood ballots that ended up in the wrong place.

Mail-in absentee ballots intended for Greenwood were accidentally postmarked for Aiken, he said. As Aiken election staff went to sign and certify each envelope before opening them, they saw the Greenwood County labels on the envelopes and realized the mistake.

Sthare volunteered to drive to Aiken on election day to pick up the ballots and bring them back. Among them were his own mail-in ballot, along with his wife’s, he said. The ballots remained unopened, and would be counted like any other.

“We just want to make sure that all those people get the chance to vote,” Sthare said.

Inside the elections office, Greenwood City Council member Ronnie Ables and his sons were waiting for the results to come in. Ables inspected the county’s zero report, a receipt-like sheet that shows each candidate and the zero votes tallied for them before results come in.

“I just can’t wait until this is all over with,” Ables said with a laugh.

When poll managers began driving up about 30 minutes after polls closed, it started as a steady drip. One vehicle after another pulled up, and the workers unloaded the equipment from their trunk. Soon though, poll managers were backed up in a line from Park Plaza to Court Avenue, waiting to drop their ballots off.

Wendi Wimmer with the elections office was a beacon of light in the dark parking lot. Two lamps sat on the rolling cart she wheeled from car to car, taking from poll managers a handful of essential documents: Their zero counts, the final counts from their precincts, the USB drive with an image of each ballot and the oaths each poll worker swore among them.

She had a checklist to ensure each necessary record was there, then packed them into red-white-and-blue bags to be taken in to Elections Director Connie Moody. Moody had help from Clemson student Brady Bagwell in using those documents to check vote totals before reporting them to the State Election Commission.

“You’ve got to pay very close attention to what you’re doing,” Moody said. “With the final precinct, I actually take a deep breath and go to check the results.”

In the rush of the work, it’s not easy to keep tabs on how each race is turning out. Moody said she takes in the results once they’re all in.

The work doesn’t stop there. Before the election board certifies results three says later, Moody and her staff have to go through provisional ballots. A researcher has to check to see if the voters who cast provisional ballots are eligible to vote. Meanwhile, crews are sent to each precinct to pick up the ballot scanners, which were too large for poll managers to bring back to the office themselves.