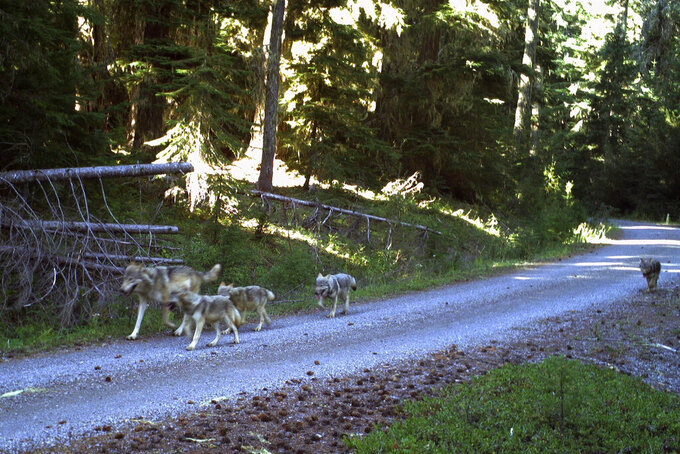 The 2021 census counted 175 wolves, up just two animals from the previous year, the Oregon Department of Fish and Wildlife said. The number of documented packs decreased to 21 from 22 after eight wolves in eastern Oregon were illegally poisone d, wiping out an entire pack. The number of breeding pairs of wolves was down to 16, from 17 in 2020.

It was the slowest rate of wolf growth since 2016, although agency officials did add that wolves expanded their range into four new areas of activity in rural areas in Jefferson, Klamath, Grant and Union counties.

The count only captures wolves observed through visual observations, tracks and remote camera photographs and the actual number of wolves in Oregon is higher, officials stressed. Just 13% of the wolves in Oregon are in the western part of the state.

The number of wolf attacks on livestock was up in 2021, including 49 confirmed incidents last year versus 31 in 2020, the department said.

Wildlife officials said they killed eight members of the Lookout Mountain Pack because the animals chronically attacked nearby livestock.

A conservation group, Cascadia Wildlands, said Wednesday the high number of wolf deaths at the hands of humans was unacceptable.

Wolves once ranged most of the U.S. But they were wiped out in most places by the 1930s under government-sponsored poisoning and trapping campaigns.

More than 2,000 wolves occupy six states in the Northern Rockies and Pacific Northwest after the animals from Canada were reintroduced in Idaho and Yellowstone National Park starting in 1995.

However, wolves remain absent across most of their historical range. Wildlife advocates argue that continued protections are needed so they can continue to expand in California, Colorado, Oregon and other states.

Wolves in Oregon no longer have state protection and were without federal Endangered Species Act protection for 2021 after the Trump administration removed those protections. In February, federal protection was restored to wolves in the western two-thirds of the state.