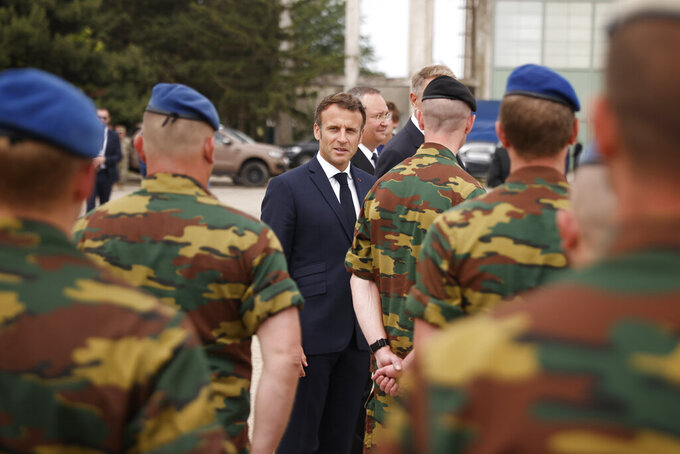 Yoan Valat, ASSOCIATED PRESS
French President Emmanuel Macron meets Belgian NATO forces at the Mihail Kogalniceanu Air Base, near Constanta, Romania, Wednesday, June 15 2022. France has around 500 soldiers deployed in Romania and has been a key player in NATO's bolstering of forces on the alliance's eastern flank following Russia's invasion of Ukraine on Feb. 24. (Yoan Valat, Pool via AP)

BUCHAREST, Romania (AP) — French President Emmanuel Macron suggested Wednesday that he would soon go to Kyiv to meet with Ukrainian President Volodymyr Zelenskyy but said he would not publicly discuss details about such a trip.

Answering a journalist’s question during an official visit to Romania, Macron said the timing was right for a visit to Ukraine's capital but that he would not “enter into logistics.” Ukraine has been at war since Russia invaded the neighboring country more than 3 1/2 months ago.

“We are in a moment where we need to send clear political signals - us, Europeans, us, the European Union - toward Ukraine and the Ukrainian people,” Macron said after meeting with Romanian President Klaus Iohannis at an air base in southeastern Romania.

The two presidents met in preparation for a June 23-24 European Union leaders' summit in Brussels and a June 29-30 NATO summit in Madrid. France currently holds the EU's rotating presidency.

Macron said a “message of support” must be sent to Ukraine before EU heads of state and government “have to make important decisions” at their Brussels meeting. The leaders are scheduled to consider Ukraine’s request for EU candidate status.

The French president also mentioned the need to find ways to allow Ukrainian grain exports. “All these reasons ... justify deep discussions and new steps,” he said.

The German government has refused to confirm or deny the media reports, while Draghi’s office would not comment publicly on an imminent visit.

German Economy Minister Robert Habeck was asked Wednesday whether he considered Russia’s decision to reduce the gas flow to Germany through the Nord Stream 1 pipeline to be a signal from the Kremlin ahead of a possible visit by Scholz, Macron and Draghi to Ukraine.

“To answer that, one would have to look inside Putin’s head,” Habeck said. “And I’m glad that I can’t look inside that.”

“It could be coincidence or it could be caused by that. There may be other reasons. It’s pure speculation,” he said.

Macron also met with NATO troops stationed at the Romanian air force's Mihail Kogălniceanu Air Base on Wednesday, a day after he said they could serve as a “powerful deterrent” on the alliance’s eastern flank.

France has around 500 troops based in Romania and leads a multinational NATO battlegroup implemented after Russia invaded Ukraine on Feb. 24.

Iohannis, Romania's president, noted the strengthening of NATO’s presence in his country and said he and Macron discussed the upcoming summit, "which will take essential decisions for the future of the alliance and for our common security.”

Macron is deeply involved in diplomatic efforts to push for a cease-fire in Ukraine that would allow future peace negotiations.

He has frequent discussions with Zelenskyy and has spoken on the phone several times with Russian President Vladimir Putin since he launched the invasion in late February.

Macron underlined the EU’s military, economic and humanitarian support to Ukraine. “But we want to build peace," he said. “Which means that at some point, we all want a cease-fire and discussions to start again.”

On Wednesday afternoon, the French president headed to non-NATO Moldova, for official talks with the country’s pro-Western president, Maia Sandu.

Like neighboring Ukraine, Moldova has expressed a desire to become a candidate for EU membership, and Macron said during his visit, "My wish is that we can send a positive and clear message in response to that request.”

EU heads of state and government plan to consider the candidate requests next week. Any response will come with “conditions and procedures, which is normal” because joining the EU is a “path,” Macron said, adding that he thinks Moldova and Ukraine’s requests should be handled the same way.

Sandu said after meeting with Macron that joining the EU is a “strategic option that would make (Moldova) part of the free world, especially in this new regional context."

In April, a series of explosions in Transnistria — a Russia-backed separatist region of Moldova with about 470,000 inhabitants — raised fears that Moldova could get dragged into Russia’s war in Ukraine and further destabilize the region.

Russia bases about 1,500 troops in Transnistria, which has been under the control of separatist authorities since a 1992 war in Moldova.

Moldova’s accession to the 27-nation bloc, however, will take many years and be contingent on various reforms, including tackling widespread corruption. Moldova ranked 105th out of 180 in Transparency International’s 2021 Corruption Perception Index, with the first place being the least corrupt.