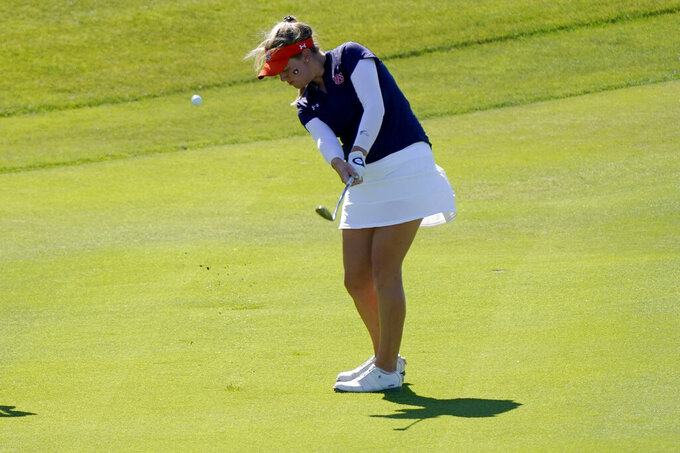 SCOTTSDALE, Ariz. (AP) — Stanford had a hard time shaking Georgia in the quarterfinals before pulling out a victory. The scorching desert beating down, the Cardinal found themselves trailing Auburn in the afternoon semifinals.

Stanford made it to the title match, just as the nation’s top-ranked team was supposed to, but it was far from easy.

Brooke Seay two-putted for birdie on the 18th hole to beat Kaleigh Telfer and the Cardinal rallied from an early hole to beat Auburn 3-2 on Tuesday and earn a spot in the NCAA championship match against Oregon.

“We’ve been the top-ranked team more times than I’d like to admit and not made it to the title match,” Cardinal coach Annie Walker said. “When the eighth or the sixth seed goes against you, they’re just free swinging and that’s really hard. I’m really proud of this group for pulling through.”

The Ducks beat Texas A&M 4-1 to earn their first trip to the championship match, creating an all-Pac-12 final that guarantees the conference's record 200th women's NCAA title across all sports.

Stanford had a tough quarterfinal match before closing out Georgia 3-2 in the morning and trailed in three matches as the players made the turn in the desert heat on Grayhawk's Raptor Course.

Freshman Rose Zhang, who won the NCAA individual title a day earlier, controlled her match with Mychael O'Berry from the start and won 5-and-4.

The rest of the Cardinal had to rally.

Aline Krauter had a back-and-forth match with Elina Sinz before taking a 2-up lead with a birdie on the par-4 14th hole. The senior from Germany closed out the match 2-and-1 with a par on the short par-4 17th to give Stanford its first must-have win.

Seay played a tight match with Telfer all afternoon with former Secretary of State and Stanford alum Condoleezza Rice walking along with her.

Telfer tied the match with a birdie on No. 17, but Seay hit a big drive on 18 and put her second shot on the par-5 within 20 feet. The Cardinal junior made the 2-foot birdie putt minutes after Krauter's par on 14, sending her teammates rushing onto the green.

“We have a really strong team and just feeding off each other,” Seay said. “Any one of us can have a great day and win. If one of us doesn’t, our teammates have got our back. We just trust each other and nothing is taken for granted.”

Oregon had been building toward this moment for four years under coach Derek Radley.

He won a national title as an assistant at Arizona in 2018 and built the Ducks into a national powerhouse, starting with the addition of Tze-Han Lin. The Ducks got better each season and this year won the Pac-12 for the first time, then their first NCAA regional.

Oregon dominated its national quarterfinal match with San Jose State 4-1 and was in control most of the afternoon against Texas A&M.

Ching-Tzu Chen overcame Blanca Fernandez Garcia-Poggio's ace on the 135-yard 16th hole to win her match 2-and-1. Briana Chacon won her match over Hailee Cooper by the same score, as did Tze-Han over Jennie Park.

Pac-12 champion Hsin-Yu Lu made a short par put on the par-3 16th to beat Zoe Slaughter 3-and-2 in the final match, sending the Ducks into the title match.

"It's not easy to get this far,” Radley said. “As a coach, I certainly don't take these things for granted, but at the same time I felt like we could be here.”