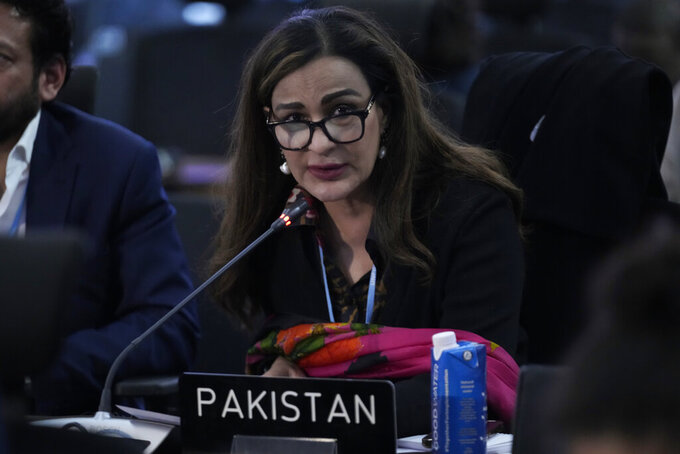 ISLAMABAD (AP) — A breakthrough funding deal at the COP27 conference to help poor countries ravaged by climate change was welcomed Sunday by Pakistan, a nation devastated this year by record-breaking monsoon rains.

Flooding likely worsened by global warming submerged a third of Pakistan's territory, left 33 million people scrambling to survive, and an estimated $40 billion in losses to the economy.

Pakistani officials, who had framed the country as a victim of climate change and sought compensation from bigger polluting nations, called the funding deal “a step in reaffirming the core principles of climate justice.”

The compensation agreement hammered out early Sunday in the Egyptian Red Sea resort of Sharm el-Sheikh establishes funding for “loss and damage” suffered by poor countries as a result of global warming.

It is a big win for developing nations that have long called for cash — sometimes viewed as reparations — because they are often the victims of climate-worsened floods, droughts, heat waves, famines and storms despite having contributed little to the pollution that heats up the globe.

It has also long been called an issue of equity for nations hit by weather extremes and small island states that face an existential threat from rising seas.

“Three long decades and we have finally delivered climate justice,” said Seve Paeniu, the finance minister of Tuvalu. “We have finally responded to the call of hundreds of millions of people across the world to help them address loss and damage.”

Pakistan Prime Minister Shahbaz Sharif on Twitter welcomed the development, calling it the “first pivotal step towards the goal of climate justice.”

Sharif acknowledged the work done on the summit deal by his Cabinet minister for climate change, Sherry Rehman, and her team. He said it's now up to a transitional committee to build on the historic development.

Rehman in a tweet said: “It’s been a long 30-year journey from demand to formation of the Loss and Damage Fund for 134 countries. We welcome today’s announcement and joint text hammered out through many nights.”

“We look forward to (the fund) being operationalized, to actually become a robust body that is able to answer with agility to the needs of the vulnerable, the fragile and those on the front line of climate disasters,” she said.

Pakistan suffered huge losses in the floods that affected a third of its 33 million population, who faced unprecedented suffering in terms of human and property losses. More than 1,700 people were killed and nearly 13,000 others injured. Over 13,000 kilometers (8,080 miles) of roadway, 439 bridges and 2.28 million houses were damaged or destroyed.

Foreign Minister Bilawal Bhutto Zardari said Pakistan came out a winner as a result of the compensation deal.

“Win for climate justice, win for developing world in honor of 33 million victims of Pakistan floods and millions around the world who suffer from a climate catastrophe they did not create and do not have resources to address,” Zardari said.

The world's biggest polluters must must now live up to their promises and pay into the fund. A 2009 agreement for a $100 billion fund created by richer nations to pay for the development of poor nations was never fully funded.