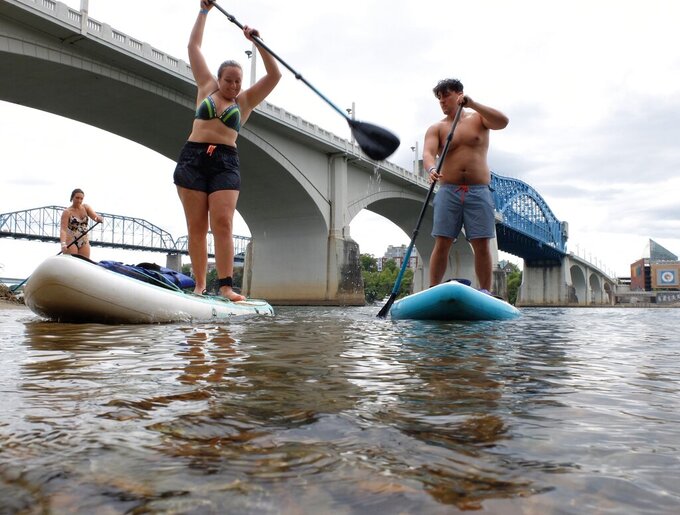 Doug Strickland, ASSOCIATED PRESS
Photo by Tim Barber/ Artur (cq) Barva, right, watches the balance maneuver by Angela Livarchuk, center, in ankle-deep water following a stand up paddle board adventure with Vanessa Barva, far left, and friends, on September 23, 2019, after lunch on the Tennessee River below the Market Street Bridge. Chattanooga is joining other towns along the Tennessee River in a partnership to promote paddling and other recreational activities in what backers hope will make the 652-mile waterway an internationally known destination for long-distance kayaking and canoeing, along with riverfront biking and hiking activities.(Matt Hamilton/Chattanooga Times Free Press via AP)

CHATTANOOGA, Tenn. (AP) — Chattanooga is joining other towns along the Tennessee River in a partnership to promote paddling and other recreational activities in what backers hope will make the 652-mile waterway an internationally known destination for long-distance kayaking and canoeing, along with riverfront biking and hiking activities.

Known as the Tennessee RiverLine, the coalition has grown over the past five years and now includes 20 cities and counties with nearly 1 million residents.

With the backing of $2.1 million from the University of Tennessee and $1.2 million from the Tennessee Valley Authority over a three-year period, the partnership is working to support and publicize paddling and other river events to help draw visitors and new residents while promoting more recreation and eco-tourism.

“This continues to expand the value of the Tennessee River through the development of a continuous system of paddling, hiking and biking experiences along the river,” said Brad Collett, an associate professor of plant sciences at the University of Tennessee in Knoxville who serves as the director of the Tennessee RiverLine Partnership. “Chattanooga is certainly a great example of a city that in many ways has done that already, but we continue to see more opportunities for such growth in the future.”

Over the past four decades, since the Moccasin Bend task force began helping the city rediscover the power of its river roots in the early 1980s, Chattanooga has built a thriving tourism, housing, entertainment and recreation market on its downtown waterfront, including billions of dollars in existing and planned developments such as the Tennessee Aquarium, the 21st Century Waterfront, the Tennessee Riverwalk, Cameron Harbor and the coming Bend development.

Chattanooga is one of five new communities joining RiverLine this fall, including Spring City and Meigs County in Southeast Tennessee and Jackson County in Northeast Alabama.

“The one thing that connects all these very diverse towns is the Tennessee River and TVA, and I think this has tremendous potential to help with recreation and economic development in the Tennessee Valley,” said Clay Guerry, a TVA recreation strategy specialist.

The Tennessee RiverLine maintains five 12-boat fleets of kayaks and supporting gear, which are housed in Roane and Benton counties in Tennessee, in Bridgeport and Muscle Shoals, Alabama, and in Paducah, Kentucky. The boats helped support many of the 30 paddling events the five pilot communities in the RiverLine program offered this year.

TVA and state, federal and local park agencies have 470,000 acres of public land along the Tennessee River to help facilitate more recreational uses and visits.

“We hope to do many more events next year, and the sky really is the limit for the potential of this program,” Collett said.