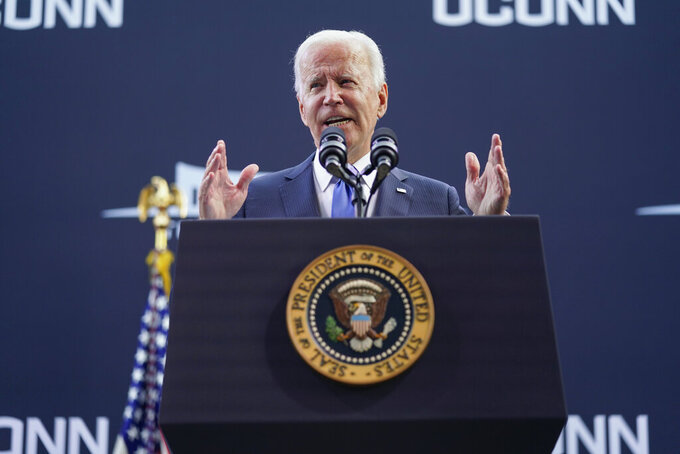 The Thomas J. Dodd Research Center at the University of Connecticut was officially rededicated Friday as The Dodd Center for Human Rights to honor the late U.S. senator and Nuremberg prosecutor as well as his son, former U.S. Sen. Christopher Dodd.

The ceremony was headlined by President Joe Biden, a longtime friend of the younger Dodd, now 77, who served in the Senate until 2011.

Friday's event, which drew the state's top politicians, was held 26 years after the center first opened as a library and archival repository for the late Dodd's papers. At that time, former President Bill Clinton was the keynote speaker for the 1995 ceremony. Since then, the archives Christopher Dodd helped establish have grown into a major research center that's home to UConn's human rights programs, including The Human Rights Institute, which offers undergraduate and graduate degrees.

During Friday's event, Biden spoke of the lessons that can be learned from Thomas Dodd and his work prosecuting Nazi Party officials and others during the 1940s for the crimes they committed during the Holocaust.

“He made sure no one could deny their own eyes and what they saw “ Biden said. ”He preserved the truth, ugly and traumatic, as it was, for all of history, so that the horrors of the Holocaust could never be diminished or denied, and the evil that we still have to guard against to this day, has to be watched."

Connecticut U.S. Rep. Rosa DeLauro, a former congressional colleague of Christopher Dodd, lauded him for his work throughout his career on behalf of children and families as well as advancing human rights around the world.

“This rededication rightfully honors the human rights legacy of both Thomas J. Dodd, whose career took him from working as a prosecutor at the Nuremberg war trials to the halls of the United States Senate, as well as pay proper tribute to our state’s longest serving senator, to my mentor, Senator Christopher Dodd,” said DeLauro, a fellow Democrat.

Prior to his speech at UConn, Biden appeared in Hartford with Gov. Ned Lamont and members of the state's congressional delegation at a child development center in Hartford to speak about a need for investments in child care and other social safety net programs.