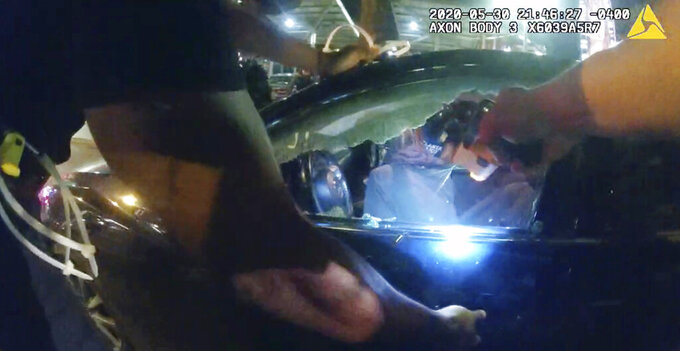 Uncredited, ASSOCIATED PRESS
FILE - In this photo taken from police body camera video released by the Atlanta Police Department, an officer points his handgun at Messiah Young while the college student is seated in his vehicle, in Atlanta, Saturday, May 30, 2020. On Monday, May 23, 2022, a prosecutor said he would not prosecute Atlanta police officers involved in a May 2020 confrontation with two college students who were stunned with Tasers and pulled from a car while they were stuck in traffic caused by protests over George Floyd’s death. (Atlanta Police Department via AP, File)

ATLANTA (AP) — A prosecutor on Monday said he would not prosecute Atlanta police officers involved in a May 2020 confrontation with two college students who were stunned with Tasers and pulled from a car while they were stuck in traffic caused by protests over George Floyd’s death.

Messiah Young and Taniyah Pilgrim, two students at historically Black colleges in Atlanta, were confronted by police in downtown Atlanta on May 30, 2020. Within days, then-Fulton County District Attorney Paul Howard announced arrest warrants had been obtained for six officers.

“Not only was law enforcement acting within the scope of their legal authority in their actions to obtain compliance, their actions were also largely consistent with the Atlanta Police Department’s own use of force policy,” Cherokee Judicial Circuit District Attorney Samir Patel said in a statement Monday.

Lance LoRusso, a lawyer representing Streeter and Gardner, said his clients “have been vindicated” and look forward to returning to full duty.

“While many of their critics and detractors are gone, Investigators Gardner and Streeter, like so many law enforcement officers, remain willing to risk their lives to protect strangers in fulfillment of their oaths of office,” LoRusso said in an emailed statement.

Streeter and Gardner were the officers who were fired. Their dismissals were overturned in February 2021 after the Atlanta Civil Service Board found the city did not follow its own personnel procedures.

“The world witnessed the outrageous and unjustified level of violence perpetrated against these college students. How can a broken arm and 25 stitches be deemed the appropriate response for an alleged curfew violation?" the lawyers said in an emailed statement.

State Attorney General Chris Carr in July appointed Patel to take over the case after Howard lost a bid for reelection in November 2020 and his successor said actions by Howard made it inappropriate for her office to handle it.

Video of the confrontation circulated quickly online. The day after it happened, then-Mayor Keisha Lance Bottoms and then-Police Chief Erika Shields announced that two officers had been fired and three others placed on desk duty.

They said at the time that they reviewed police body camera footage before making their decision. After that review, Bottoms said, “Use of excessive force is never acceptable.” Shields called the footage “really shocking to watch.”

Police released the body camera video the night after the confrontation happened.

It shows police taking another young man into custody in a downtown street alongside a line of stopped cars. The man is pleading with police to let him go, saying he didn’t do anything.

Sitting in the driver’s seat of a car stopped in the street, Young holds up his phone, appearing to shoot video as an officer approaches and pulls the driver’s side door open. Young pulls the door shut and urges the officers to release the other man and let him get in the car as the dark sedan advances a bit.

The car gets stuck in traffic and officers run up to both sides of the car shouting orders. An officer uses a stun gun on Pilgrim as she’s trying to exit the car and then officers pull her from the vehicle.

Another officer yells at Young to put the car in park and open the window. An officer repeatedly hits the driver’s side window with a baton, and another finally manages to break it.

Police reports do not list a gun as having been recovered.

At a news conference two days later, Pilgrim said she and Young “felt like we were going to die in that car.”

Patel's statement says video that was distributed after the incident “was not an accurate portrayal of the entire encounter between Mr. Young, Ms. Pilgrim, and law enforcement.” It wasn't immediately clear whether he was meant the first videos that circulated online or the body camera video.

The evidence shows that the two students violated a curfew put in place because of protests, and the “officers' use of force was the direct result of Mr. Young and Ms. Pilgrim’s resistance to and noncompliance with the officers’ instructions,” the statement says. It also shows “the use of the Taser, and indeed any force used by the officers ended immediately once Mr. Young and Ms. Pilgrim were subdued.”