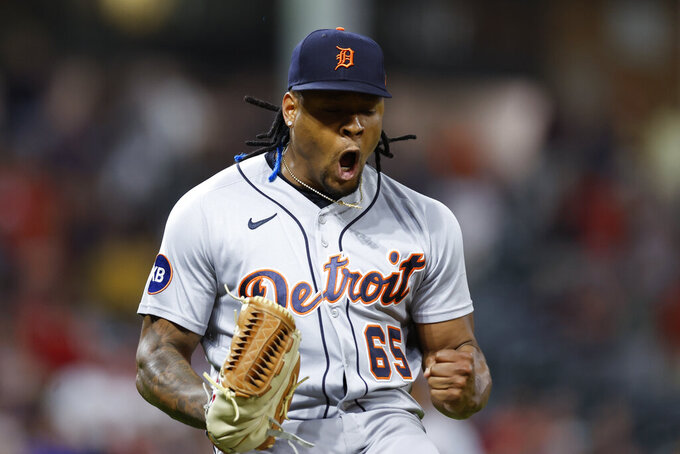 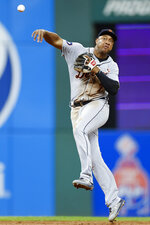 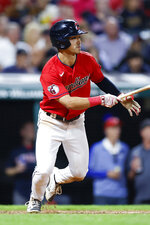 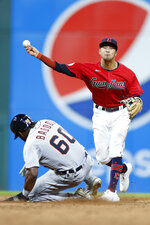 They also had a beef with the umpires during and after their 4-3 loss to the Detroit Tigers.

Cleveland manager Terry Francona was ejected in the ninth inning for arguing after the umpires ruled Myles Straw struck out with the tying run on third for the second out of the inning.

And catcher Austin Hedges was still steaming several hours later about a call in the first inning that helped Detroit take a 3-0 lead.

Rookie Tyler Freeman led off the ninth with a double and moved to third on Hedges’ sacrifice. Plate umpire Lance Barksdale originally ruled Straw fouled off a 2-2 pitch from Tigers All-Star closer Gregory Soto. The four umpires had a meeting and ruled Straw tipped the ball, but catcher Tucker Barnhart caught it before it hit the ground for strike three. Francona stormed out of the dugout and argued the call with Barksdale.

Francona was quickly ejected and remained on the field to continue the argument as the crowd booed. Straw also was ejected.

Steven Kwan, who was 3 for 3 with a walk, tapped back to Soto to end the game.

“You know, I thought he called foul ball,” Francona said. “And that’s what I was arguing. I can’t imagine they could overturn it from where they were, but I guess what they overturned is that he (Barnhart) caught the ball. I didn’t even see — I thought it was foul ball. I needed to yell at him anyway.”

Barksdale explained the decision to a pool reporter.

“We go on sound because we can’t see the ball down," he said. "I thought I heard the ball hit the ground, which it did, but the catcher got his glove under it. I didn’t know it at the time. The catcher is telling me he caught the ball. We try to get the plays right. So I checked the ball and got my crew together and to a man no one else had the ball hitting the ground. So we changed it. We try to get the plays right. He foul tipped it and the catcher said he got his glove under it ... and we said the ball did not hit the ground.”

Cleveland starter Zach Plesac (2-11) appeared to have completed a scoreless inning thanks to a play at the plate. Javier Báez was on second with two outs when Harold Castro’s grounder caromed off second base and rolled into left field. Shortstop Tyler Freeman retrieved the ball and threw to the plate after Báez was waved home.

Hedges tagged the sliding Báez and Barksdale gave the out call. Hinch challenged that Hedges blocked the sliding lane before catching the ball. The call was overturned after a review with the umpiring crew in New York.

“It’s a play that’s been called a few times now recently that really has never been called before,” Hedges said. “For some reason, New York feels like they need to take over the game and change the way the game’s played. Guys are just out. There’s plays at home that are beating the runners and for 150 years you’re out. And now, we’re calling some type of rule that is really tricky to define. To be able to take the game into their own hands that way and to, first of all, that cost one run automatically. And then what ended up (happening). Honestly, it’s a disgrace. It’s embarrassing.”

Francona argued the decision with Barksdale and third base umpire Alan Porter.

“They said the catcher did not give the runner the lane," Barksdale said to the pool reporter about the umpires in New York. "He blocked the plate from the beginning.”

The Tigers, leading 1-0, took advantage of the overturned call as Plesac couldn’t finish off the inning. Plesac hasn’t won since June 5. The right-hander allowed four runs in 5 1/3 innings.

The Tigers have won two of three against the AL Central leaders, who are one game ahead of Minnesota and the Chicago White Sox.

Garrett Hill (3-3) held Cleveland to one run in five innings.

Joe Jiménez inherited a 4-2 lead in the eighth, but had to work out of trouble to keep Detroit in the lead. Amed Rosario tripled and scored on José Ramirez's bloop hit to center.

Rookie Oscar Gonzalez struck out and All-Star Andrés Giménez fouled out. Josh Naylor, who wasn’t in the lineup after tweaking his ankle Monday, received a loud ovation when he batted for Owen Miller.

Naylor worked the count to 2-2 but grounded out sharply to second baseman Jonathan Schoop, who was playing in shallow right field.

Tigers: LHP Tarik Skubal, out for the season with a sore elbow, has been examined by Dr. Neal ElAttrache in Los Angeles, and the team is still waiting for results.

Guardians: RHP Cal Quantrill (9-5, 3.67 ERA) held Toronto to one hit and struck out seven in seven shutout innings on Aug. 12.