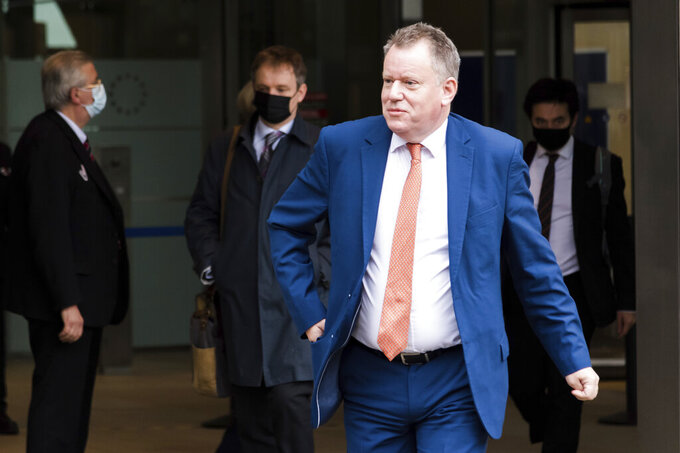 BRUSSELS (AP) — Another week of Brexit negotiations still left the European Union awaiting a firm counterproposal from the United Kingdom on Friday to ease a standoff over how to deal with the country's departure from the bloc.

Both sides are fighting over differences in how to regulate trade in Northern Ireland, which is part of the U.K. but also belongs to the EU's huge single market in a Byzantine deal that proved essential in the Brexit divorce negotiations.

Both sides recognize that deal is far from perfect and have been negotiating how to improve the movement of goods to Northern Ireland from Britain without giving London unfettered backdoor passage to the market of the 27-nation EU.

While EU Brexit negotiator Maros Sefcovic said there was a “change in tone” for the better in London, he added that last month's EU compromise proposal to cut down on red tape between Britain and Northern Ireland needed to be reciprocated.

“It is essential that the recent change in tone now leads to joint tangible solutions,” he said after meeting with his UK counterpart, David Frost.

“We have not yet made substantive progress,” on such things as customs and checks on animal transports, acknowledged Frost.

They will meet again in London next week.

Negotiations have dragged on for a month, with Britain threatening to suspend parts of the legally binding divorce agreement between the two sides if no solution is found soon. Frost said triggering an emergency break clause known as Article 16 remains a real possibility.

“If we can’t safeguard positions on the problems in Northern Ireland through negotiations, then Article 16 safeguards are there as well,” he said.

Article 16 lets either side suspend portions of the Brexit agreement in extreme circumstances. A move by Britain to use it would trigger EU retaliation and could spiral into a trade war between the 27-nation bloc and its increasingly estranged former member.

Northern Ireland is part of the U.K. and shares a border with EU member Ireland. Under the Brexit deal agreed before the U.K. left the EU at the end of 2020, it remains inside the bloc’s tariff-free single market for goods to ensure there is an open border on the island of Ireland — a key pillar of Northern Ireland’s peace process.

That has created a new customs border in the Irish Sea for goods entering Northern Ireland from the rest of the U.K., even though they are part of the same country.