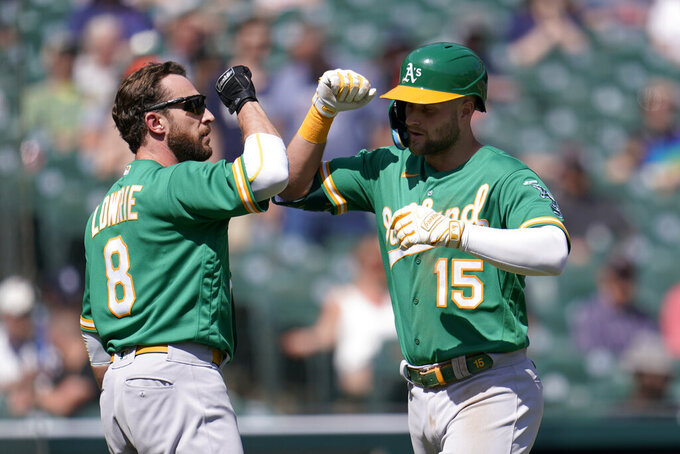 DETROIT (AP) — Seth Brown hit a tiebreaking, two-run homer in the eighth inning and the Oakland Athletics beat the Detroit Tigers 5-3 on Thursday.

Michael Fulmer (1-2) got the first two outs of the eighth, but Jed Lowrie drew a walk and Brown homered to right on a 92-mph fastball. The Tigers have lost nine of 10.

“I felt my top hand was leaking out on my first couple at-bats,” said Brown, who had gone 0 for 3 with a strikeout before the homer. “I just wanted to keep everything tight and try to put a good swing on something.”

Oakland came to Comerica Park this week with a nine-game losing streak, but won four times in an unusual five-game series. The Athletics' only loss came when they were the official home team in the first game of Tuesday's doubleheader — a game they were originally supposed to host before the season's first series was postponed by the lockout.

“Coming here on Sunday night, I think we were all pretty frustrated with how we were playing,” A's manager Mark Kotsay said. “The guys made some adjustments and it obviously paid off. It feels good to be back on track.”

“A.J. has been phenomenal — he's pitching as well as he has since he was drafted,” Kotsay said. “We talked throughout spring training about my expectations and the progress he needed to show to stay here, and he's done everything I've asked.”

Dany Jimenez pitched the ninth for his sixth save in six opportunities.

Miguel Cabera made it 3-all in the Detroit sixth with his 601st career double, tying Barry Bonds for 17th all-time. Jeimer Candelario opened the inning with a triple off Domingo Acevedo and scored on Cabrera's 3,014th career hit.

“I didn't have my best stuff, which hurt the team today, but the guys picked me up,” he said. “That's what I expect from this group. I never doubted that, as bad as things got last week.”

After beating the Tigers by a combined 13-1 in the previous two games, Oakland took a 3-0 lead in the first inning of the series finale. Tony Kemp led off with a single and stole second, Shelden Neuse walked and Lowrie hit an RBI single.

An out later, Ramón Laureano hit a bouncer back to the mound, but pitcher Beau Brieske misplayed it to load the bases and Christian Bethancourt followed with a two-run double.

Brieske, though, didn't allow another run, giving up four hits and three walks in six innings.

“I felt a lot better later in the game than I did early, so that's something to build on,” he said. “I need to just stay loose and have fun. I get myself in trouble when I try to be fine.”

Detroit put together a rally in the fifth. With one out, Willi Castro singled and Spencer Torkelson walked. Tucker Barnhart followed with an RBI double and Robbie Grossman's groundout scored Torkelson to make it 3-2.

“We had a bad start and a bad finish to the game, but we did show some life in the middle,” Tigers manager A.J. Hinch said. “It's just another way to lose.”

Tigers: OF Victor Reyes (quad strain) went 3 for 4 with a homer and three runs scored in a rehab appearance Wednesday night with Triple-A Toledo.

Detroit is 2-10 in May with both wins coming in doubleheaders. They haven't won a game without losing on the same day since a 5-1 win over the Dodgers on April 30.

MOVING UP THE LISTS

Cabrera is six hits behind Rafael Palmeiro for 29th place on the career list. It was also his 1,121st extra-base hit, moving him ahead of George Brett for sole possession of 18th place, one behind Manny Ramirez.

SECOND VERSE, SAME AS THE FIRST

“I don't care about last year,” Hinch said. “Everybody wants an analysis, but I've got to figure out how to beat the Orioles tomorrow. We're sick of losing.”

Oakland: The Athletics will head home for a four-game weekend series against the Los Angeles Angels, including their second doubleheader of the week on Saturday. Daulton Jeffries (1-5, 5.22) will start the opener while the Angels have not announced their rotation.

Detroit: The Tigers remain home for a three-game series against the Baltimore Orioles. Eduardo Rodriguez (0-2, 4.50) will pitch Friday's opener against Baltimore's Jordan Lyles (2-2, 4.50).