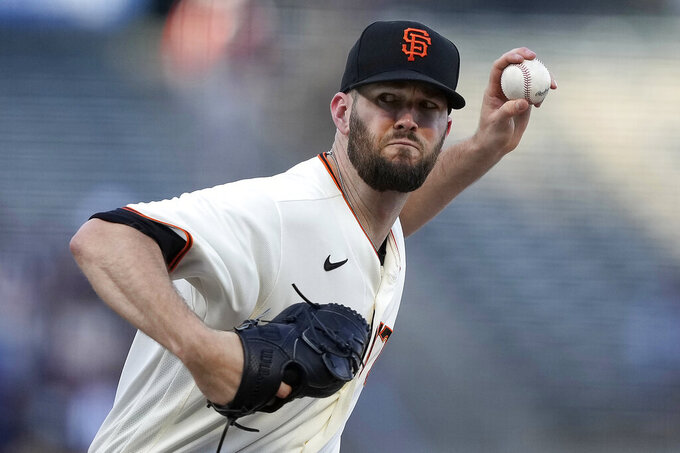 He gives manager Gabe Kapler two starters named Alex in the rotation after Tuesday's addition of right-hander Alex Cobb on a $20 million, two-year contract with a club option for 2024. The two pitchers even worked out together briefly during the coronavirus shutdown last year.

San Francisco President of Baseball Operations Farhan Zaidi needed to address the rotation after losing right-hander Kevin Gausman to the Blue Jays earlier this week on a $110 million, five-year contract.

“It's not a strategy, we talked about how we could imagine our rotation being filled up with a mix of guys on one-year deals or multi-year deals, and this is just how it's played out so far,” Zaidi said.

Wood returned from a bout with COVID-19 to contribute during the key stretch run, when 107-win San Francisco edged the rival, 106-win Dodgers on the final day of the regular season before losing to Los Angeles in a thrilling, five-game NL Division Series.

“My wife and I are ecstatic to be back. We have such a special group. The culture they've started to build there and to be a part of that last year and see it culminated into 107 wins and a playoff berth and winning the division, I just had a blast,” Wood said. “It's such a great group of people, top to bottom.”

Both Cobb and Wood expressed their gratitude that the Giants showed them they were wanted quickly once the season ended.

In fact, Cobb appreciated the Giants' aggressiveness to make something happen before a potential lockout, calling it a “no-brainer, we didn't need to wait around for anybody else.”

“There's a long list of things that kind of go on that appealing side of coming and joining the Giants organization,” Cobb said. “Watching from afar, just seeing what they did last year, a 107-win team.”

Cobb also has some familiarity with the Giants having played with third baseman Evan Longoria and catcher Curt Casali.

“The one constant thing you always hear is how much everybody loves playing there,” Cobb said.