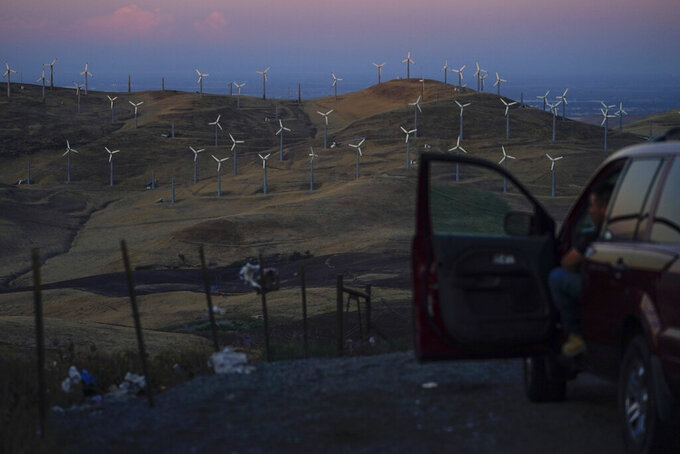 Godofredo A. Vásquez, ASSOCIATED PRESS
A man looks out at wind turbines in Livermore, Calif., Wednesday, Aug. 10, 2022. Congress is poised to pass a transformative climate change bill on Friday, Aug. 12. The crux of the long-delayed bill is to use incentives to accelerate the expansion of clean energy such as wind and solar power, speeding the transition away from the oil, coal and gas that largely cause climate change. (AP Photo/Godofredo A. Vásquez)

Congress is expected on Friday to pass a major bill that includes close to $375 billion in spending related to fighting climate change. The bill, called the Inflation Reduction Act, will infuse cash, subsidies and tax breaks into various sectors of the economy, all aimed at making green energy much cheaper. It's expected to reduce U.S. carbon emissions around 40% by 2030.

Here are a handful of quotes from politicians, environmentalists and energy experts:

— “I think the Inflation Reduction Act goes a long way in the advancement of environmental justice. That feature of the bill is a pretty significant focus.” — Julius Redd, an environmental attorney at Beveridge & Diamond.

— “We haven’t done anything this large at the federal level ever." — Harrison Fell, a professor focused on energy policy at North Carolina State University.

— “This law is big for the U.S. but in global terms long overdue." — said Niklas Hohne, co-founder of the New Climate Institute in Germany.

— “Rather than drive out fossils — especially coal — by regulating them to death, it is going to help drive them out by making them less competitive." — Michael Gerrard, director of the Sabin Center for Climate Change Law at Columbia University.

— “Environmental justice communities once again appear to be placed in a precarious position of having to accept risky carbon capture and sequestration technologies, more pollution, and unfair health ‘trade-offs’ in order to get environmental and climate benefits.” — Robert Bullard, a professor of urban planning and environmental policy at Texas Southern University and a member of the White House Environmental Justice Advisory Council.

“The IRA imposes an $11.7 billion tax on crude oil and petroleum products. At a time of record-high energy prices, Congress should not add additional costs on American energy companies competing globally." — American Petroleum Institute and almost 60 other energy industry associations in a letter to House leadership.

— “It’s not as big as I want, but it’s also bigger than anything we’ve ever done." — Sen. Brian Schatz, a Hawaii Democrat who leads the Senate climate caucus.

— “We’ve had a hard time passing sticks in this country. And so we’re going to carrots. And that may be slightly less economically efficient and involve slightly higher cost to the economy and to consumers. But honestly, it’s so important that we do this and the benefits are still likely to be so much larger than the costs, that this is still unquestionably the right thing to do." — Samantha Gross, director of the Energy Security and Climate Initiative at Brookings.

— “Senate Democrats just voted to raise taxes on working families, kill West Virginia’s coal industry, and empower the IRS to spend more time snooping around Main Street. At a time of record inflation, it’s inexplicable for them to repeat the massive over-taxing, over-spending, and over-regulating mistakes already driving us into a recession.” — Sen. Shelley Moore Capito, a Republican from West Virginia.

— “It’s not nearly enough money to to wean us off of fossil fuels. And there is no carbon tax many liberals want, but at least it will be remembered as showing that in 2022, the United States was taking climate change seriously." — Rice University Historian Douglas Brinkley.

— “By investing in American energy production and innovative technologies, the U.S. is on a path toward energy security, lower gas and home energy prices and we are leading the fight on global climate.” — Sen. Joe Manchin, a Democrat from West Virginia.

The Associated Press receives support from the Walton Family Foundation for coverage of water and environmental policy. The AP is solely responsible for all content. For all of AP’s environmental coverage, visit https://apnews.com/hub/climate-and-environment