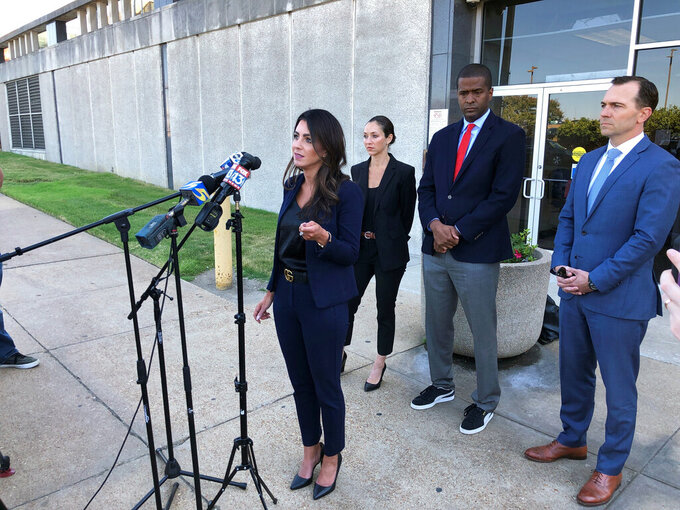 COLUMBIA, S.C. (AP) — The latest lawsuit in a series alleging widespread sexual misconduct across competitive cheerleading alleges that officials allowed two choreographers to continue working after they were investigated for sexual abuse.

Snowballing accounts of cheerleaders' alleged abuse have led to increased scrutiny around the sport since the founder of an elite South Carolina cheerleading gym reportedly killed himself in late August amid an investigation into abuse. The latest lawsuit brings the number of accusers to 20.

The lawsuits paint a sordid picture of a sporting scene in which coaches use their power to share drugs and initiate sex with underage athletes while a network of institutions provides weak or nonexistent oversight.

A federal complaint filed Monday in Ohio expanded the scope of the burgeoning scandal beyond the Southeast. Together, the unidentified plaintiffs across six states — all represented by the South Carolina-based Strom Law Firm — accuse the sport's governing bodies and leading competitive institutions of failing to protect underage athletes from the detailed abuse.

In the latest case, two men who were contracted to provide training at an Ohio gym invited a 17-year-old male cheerleader to their hotel room after midnight in late July 2016, the lawsuit alleges. It says the cheerleader refused their invitations to drink alcohol, and that the men, then 24 and 25, had sex multiple times with the teen despite his attempts to leave. The gym called a meeting with the boy to discuss any potential inappropriate conduct but took no action, according to the lawsuit.

The plaintiff says he sent details of the encounter in an anonymous email to two gyms in California and North Carolina in June 2020. After a U.S. All Star Federation case manager touched base, the plaintiff made a formal report and subsequently cooperated with Ohio law enforcement officials, according to the lawsuit.

Ohio law enforcement did not seek charges because the plaintiff was over 16 — the state's age of consent — at the time, according to the lawsuit.

USASF suspended the two accused employees while a third-party investigation was underway, according to the lawsuit, which adds that the minor provided details of their encounter Sept. 23, 2020, Zoom call with an authorized USASF representative.

On Nov. 19, 2020, both men were removed from USA Cheer's public list of ineligible coaches, the lawsuit states. USASF and USA Cheer created the register after accusations in 2020 that Jerry Harris — a prominent coach featured on a popular Netflix show — had solicited sex from two children, the lawsuit says. Harris eventually plead guilty to sex crimes.

But a recent journalistic investigation suggests the list is incomplete. In September 2020, USA Today reported that the register missed dozens of cheerleading coaches who had been criminally charged or convicted of sexual abuse.

On a Nov. 23, 2020, call, a USASF attorney told the boy in the Ohio case that a detective said he couldn't pursue charges without any witnesses, according to the lawsuit. The lawyer said that because of that, USASF's “hands are tied.”

Each lawsuit names USASF, USA Cheer, and Varsity Spirit, a subsidiary of Varsity Brands, as defendants. The lawyers argue that as the dominant provider of cheer competitions and camps and through its effective control over the oversight bodies, Varsity Spirit failed to provide the safe environment it advertised.

USASF and USA Cheer were both created with interest-free loans from Varsity to govern the growing sport.

Varsity Brands — which also faces separate antitrust lawsuits — has denied any culpability while expressing support for the cheerleaders alleging abuse. Varsity Spirit acknowledged that it provided “necessary support” to establish USASF. But the company denies notions that it controls the governing body, emphasizing its independence from inception. Varsity Spirit recently retained a high-powered attorney to consider defamation claims related to the lawsuits.

“To be clear, Varsity stands with the survivors and their pursuit of justice," Varsity Brands said in a statement. “We are outraged that predators took advantage of cheerleading programs to abuse innocent children. We reject any accusation that Varsity Spirit enabled such unthinkable behavior.”

USASF did not respond to an email seeking comment Wednesday.

The scandal has embroiled the cheerleading world as the competitive season gets underway. After the allegations surfaced at South Carolina's Rockstar Cheer, 10 gyms across the Carolinas, Georgia, Pennsylvania, Rhode Island and New Jersey stated that they would drop the Rockstar name and branding. A North Carolina public school system banned its athletes from participating in competitions run by Varsity Spirit, WRAL-TV reported. Most recently, Georgia police obtained an arrest warrant against a coach accused of raping a 15-year-old boy, The Atlanta Journal-Constitution reported.