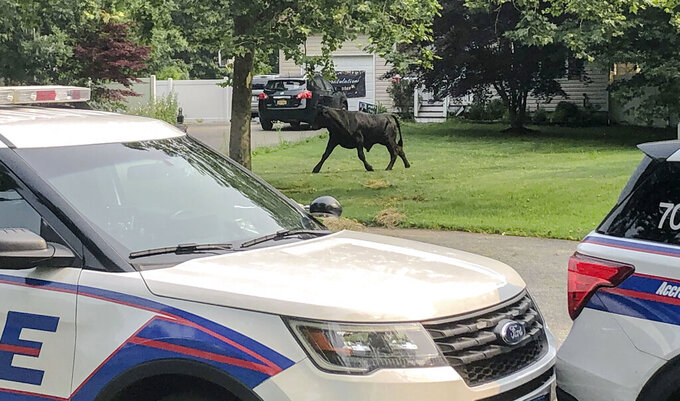 Uncredited, ASSOCIATED PRESS
In this provided by Suffolk County, N.Y., Police Department, a bull runs loose along Montgomery Avenue on Tuesday, July 20, 2021, in Mastic, N.Y. The bull has eluded capture for several days on Long Island despite attempts to lure the roaming animal with grain and a cow in heat. (Suffolk County Police Department via AP)

MASTIC, N.Y. (AP) — An escaped bull has eluded capture for several days on Long Island despite searchers employing a helicopter and night-vision equipment along with attempts to lure the roaming animal with grain and a cow.

Police in Suffolk County say they began responding to calls about the 1,500-pound (680-kilogram) bull running loose Tuesday morning after it broke through the fence of a local farm. Residents have spotted the dark-coated bull, since nicknamed Barney, walking across fields, roads and suburban front yards. And it briefly shut down a portion of Sunrise Highway.

Teams have searched the area about 50 miles (80 kilometers) east of New York City on foot and on horseback. They've used drones. A “bull trap” baited with the same feed Barney eats on the farm did not work, nor did other would-be traps.

“We’ve tried luring him with a cow, with horses,” Frankie Floridia of Strong Island Animal Rescue told Newsday. “I’m out here with a (tranquilizer gun), looking for him, and I’m thinking, ‘I’m hunting cows in an Indiana Jones movie.’ It’s just frustrating. The longer it goes, you wonder what happens.”

The bull is roaming around a part of Long Island that features dense underbrush and pine barrens. Floridia said the dense vegetation has hindered the search.

Rescuers said they hope to have the bull moved to a sanctuary.

“I’m not afraid of him being aggressive to humans,” Floridia said. “He doesn’t have horns, he’s not an aggressive animal. I think he’s going to see people and he’s going to run away. I’m just afraid, with the color of his coat, he’s going to wander into a road in the dark and some driver won’t see him.”