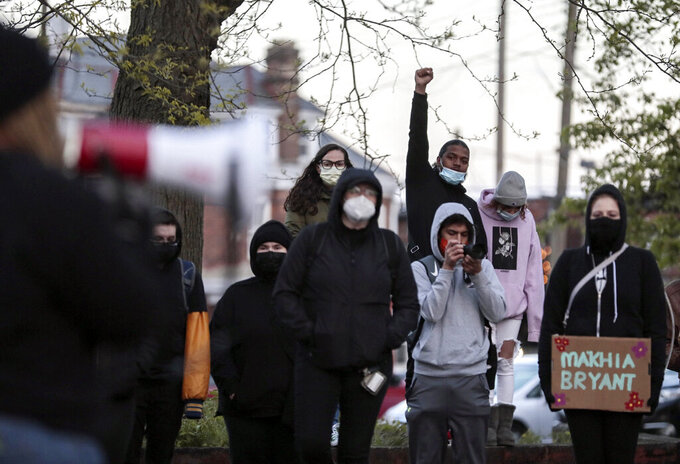 Joshua A. Bickel, ASSOCIATED PRESS
FILE - In this Wednesday, April 21, 2021, file photo, demonstrators chant "Ma'Khia Bryant" during a community vigil for the 16-year-old, at Douglas Elementary School in Columbus, Ohio. Body camera video released shows a Columbus officer fatally shoot Bryant, who swung at two other people with a knife. The U.S. Justice Department will review practices of the Columbus police department, which has been rocked in recent years by a series of fatal police shootings of Black people and its response to last year's racial injustice protests, the city and the government announced Thursday, Sept. 9. (Joshua A. Bickel/The Columbus Dispatch via AP, File)

COLUMBUS, Ohio (AP) — The announcement that the U.S. Justice Department will provide technical assistance to Columbus police — at the city's invitation — has done little to curb community activists’ allegations that officials aren't doing enough to change the department following a series of fatal police shootings of Black people.

The activists, including several faith leaders, are dismissive of the review announced by the Justice Department’s Office of Community Oriented Policing Services, saying it won’t lead to the changes needed within the division, which was also criticized for its handling of last year's racial injustice protests following the murder of George Floyd in Minneapolis.

On Thursday, the activists asked the Justice Department to launch an investigation through its Civil Rights Division, a probe sometimes called a “pattern-or-practice” investigation that can lead to court-ordered oversight of a troubled police department.

“We watched Mayor Ginther attempt to calm the community by calling on the Department of Justice to review current practices within the division,” Adrienne Hood, the mother of 23-year-old Henry Green, who was killed by Columbus police officers in 2016, said on video Thursday.

Hood added, “As people of faith, we demand more than a review. We need a reckoning that will transform law enforcement into a public safety department which cares for, serves and protects all of its citizens."

The mother-turned-activist read the letter to the Justice Department on video, pleading for the department to investigate the internal police practices she said killed her son.

"That’s what we asked for, but we don’t tell the attorney general what to do and how to handle things,” Ginther said. “He doesn’t need our invitation or request.”

A COPS Office review or a pattern-or-practice investigation “could help us do even more with respect to reform, oversight, accountability and transparency,” Ginther told The Associated Press on Wednesday.

The Justice Department's Civil Rights Division considers a number of factors when deciding whether to open a pattern-or-practice investigation, including the status of local police reform efforts, the agency said Thursday in a statement to the AP.

The department also consults with staff in the COPS Office and other Justice programs, “to consider whether a pattern-or-practice investigation and enforcement action is the best approach or whether other forms of intervention would be more appropriate to address the concerns of the community,” the agency said.

An AP review of city correspondence indicates city leaders were directed to the COPS Office in April when they asked the Justice Department and Attorney General Merrick Garland to step in. The April 21 request came one day after a white Columbus officer fatally shot 16-year-old Ma'Khia Bryant, who was Black, as she swung a knife at a woman.

“I would like to possibly schedule a call with AG Garland, you and his team about the possibility of inviting the Justice Dept to Columbus to help us reform the Columbus Division of Police,” Zach Klein, the Columbus City Attorney, said in an email to Garland’s chief of staff, Matthew Klapper.

“We want Columbus to be the model of how things can be done when we all work together,” Klein wrote in the email obtained by the AP through a records request.

Klein responded by welcoming the introduction. “The positive possibilities are endless, and I’m confident a partnership between Columbus and DOJ could serve as a national model to improve policing for communities and police,” Klein wrote.

Six days later, Columbus formally requested a review from Chapman “of Columbus police operations, identifying any and all racial biases in policing efforts.”

In that April 27 letter, Klein and Ginther spoke of a desire to “willingly and voluntarily engage” with the Justice Department. But they also said they were open to a tougher approach involving “court-ordered enforcement mechanisms.”

“If we exhaust all remedies available to us as partners, and litigation becomes necessary, we will fully support these efforts because we share the ultimate goal of reforming policing practices in the City of Columbus,” the two leaders said.

But advocates and civil rights attorneys believe the city could have done more to ensure lasting changes would take place as a result of the Justice Department coming in.

Ginther and city leaders still had the opportunity to turn down the Justice review offer and asked for an investigation where there is an enforcement mechanism through court-ordered mandates, said Sean Walton, an attorney who has represented the families of several Black people fatally shot by Columbus police.

Walton also criticized the city's use of the word “partnership” to describe the effort between them and Justice.

“I’m more skeptical of a process where we do not have any accountability,” Walton said Thursday. “And when the final decisionmakers or the final authorities in terms of enforcing the reforms that are needed is the mayor and the public safety director of Columbus.”