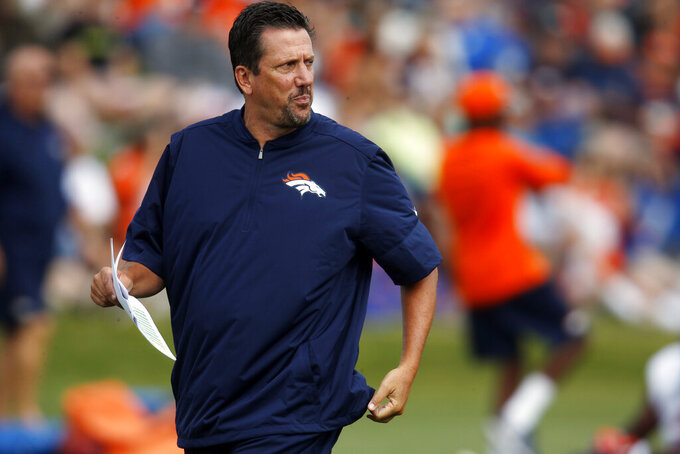 NEW YORK (AP) — New York Jets assistant coach Greg Knapp was hit by a car while riding his bicycle in California in a “horrific” crash over the weekend.

Knapp was struck Saturday in the city of San Ramon, in the San Francisco Bay Area. The 58-year-old longtime NFL assistant was hospitalized and was in critical condition Tuesday, Lt. Tami Williams of the San Ramon Police Department said.

The accident happened at close to 3 p.m. and the driver involved is cooperating with the investigation, Williams said in a statement.

A preliminary investigation showed drugs or alcohol did not appear to be a factor in the crash, she added.

The nature of Knapp’s injuries was not immediately known, and Williams said in an email she couldn't release any other details.

Knapp, who lives in the neighboring city of Danville, was hired by the Jets in January as part of new coach Robert Saleh's staff, serving as the pass game specialist. Among Knapp's primary roles is to help develop quarterback Zach Wilson, the No. 2 overall draft pick.

“Greg is such an amazing individual, it is hard to imagine the challenge facing him and his family," Saleh said in a statement released by the team Tuesday. "Greg’s fun nature, kind disposition and wealth of knowledge has allowed him to make genuine connections with all of our coaches, players and staff since he has been here.

"I ask that you keep him in your prayers as we all pull for him to recover from this horrific accident.”

Knapp's family also released a statement Tuesday through the Jets.

"Greg is an amazing father and husband whose passion for life can be felt in all his interactions with people,” the family said. “He is our rock and biggest supporter, pushing us to all strive to better ourselves each day with constant love and inspiration.

“While many know him for his achievements as a coach, his impact as a father and husband are far greater. We are so fortunate to have him in our lives. We are sincerely thankful to all those who have continued to reach out and provide support — it has meant the world to us."

Knapp is well-liked and respected in NFL circles and has established himself as one of the league's top offensive-minded coaches. After a nine-year stint as an assistant at Sacramento State, where he also played quarterback, Knapp got his first NFL job with San Francisco in 1997 as an offensive quality control coach under Steve Mariucci. He was promoted to quarterbacks coach two years later and became the 49ers' offensive coordinator in 2001.

Knapp is expected to have a key role in helping offensive coordinator Mike LaFleur and quarterbacks coach Rob Calabrese teach and develop Wilson as the 21-year-old QB adjusts to NFL life as the likely starter for the Jets this season. Knapp called Wilson a “fast study” and was looking forward to helping him progress.

“He’s done a good job of minimizing mistakes,” Knapp said of Wilson last month. "You’ve got to expect mistakes from anyone who’s starting for the the first time — in any profession, for that matter. And I’m seeing very minimal same mistakes twice. So he learns quickly from his mistakes and that’s impressive to see from a young guy. He’s a big-time student of the game.”

Jets rookies reported to the team facility in Florham Park, New Jersey, on Tuesday, with the rest of the team scheduled to report for training camp July 27. The first camp practice is the next day.