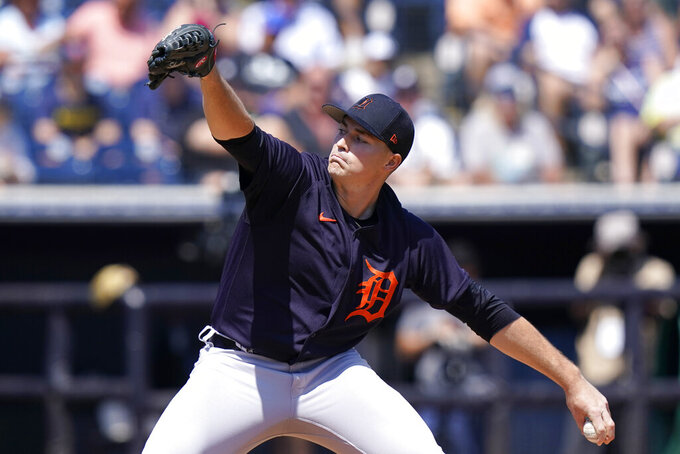 DETROIT (AP) — The Detroit Tigers are suddenly on the verge of being relevant again after spending big money in free agency to jolt a franchise that has been focused on drafting and developing players in a long rebuilding process.

Detroit was 77-85 last season, but it was its best record in five years, showing just how rough it has been lately for baseball in the Motor City.

Determined to pick up the pace on the slow turnaround, the Tigers were active before and after the 99-day lockout ended on March 10 to complement the young players they have in place.

“When we show up to spring training, I’ve told every team I’ve ever managed we need to win our division and we need to make the playoffs," second-year manager AJ Hinch said. “I don’t know why this would be any different."

The Tigers have had some real reasons to be fired up since last winter, adding two-time All-Star infielder Javier Báez with a $140 million contract to address a desperate need at shortstop and lefty Eduardo Rodríguez for $77 million to lead a solid starting rotation.

“Our manager and organization last year sent a new message that it’s time to win and they showed that this past offseason, signing two big guys," veteran slugger Miguel Cabrera said. “I think we’ve got an opportunity to do that here so I’m really excited."

Detroit opens the regular season April 8 at home against the Chicago White Sox.

Besides adding Báez and Rodríguez, Detroit brought Michael Pineda to a rotation that also includes righty Casey Mize, bolstered the bullpen with lefty Andrew Chafin and traded for catcher Tucker Barnhart from Cincinnati.

“There’a a buzz in the clubhouse,” said outfielder Robbie Grossman, who became the seventh Tiger to have at least 20 homers, 20 stolen bases and 20 doubles last season. “We’ve brought in some really good players. We’re only going to get better so our expectations are getting higher and higher.”

The Tigers didn't lose much in the offseason, parting way with shortstop Niko Goodrum and left-hander Matthew Boyd.

First baseman Spencer Torkelson, the No. 1 overall pick in 2019, and outfielder Riley Greene, taken No. 5 overall in 2018, seem to be closing in on being contributors in Detroit.

“I hope they don’t put too much pressure on themselves,” Hinch said.

A season after joining the 500-home run club, Miguel Cabrera is closing in on another milestone to join an impressive group of all-time greats.

Cabrera is 13 hits away from joining six players, including Hank Aaron and Willie Mays, with 3,000 hits and 500 homers. A decade ago, he won the Triple Crown and his first of two straight AL MVP awards.

If Detroit has any chance of competing with the AL Central Division champion Chicago White Sox, it has to fare better in the division.

The Tigers were 30-46 against Central teams last year while having a winning record against the AL’s other divisions and the NL. They finished 16 games behind Chicago and almost as far back in the wild-card race.

Gamblers who expect the Tigers to win at least one more game than they did last year can make money because their over-under total for wins is 77.5, according to according to FanDuel Sportsbook. Their odds of winning the World Series are 55-1.