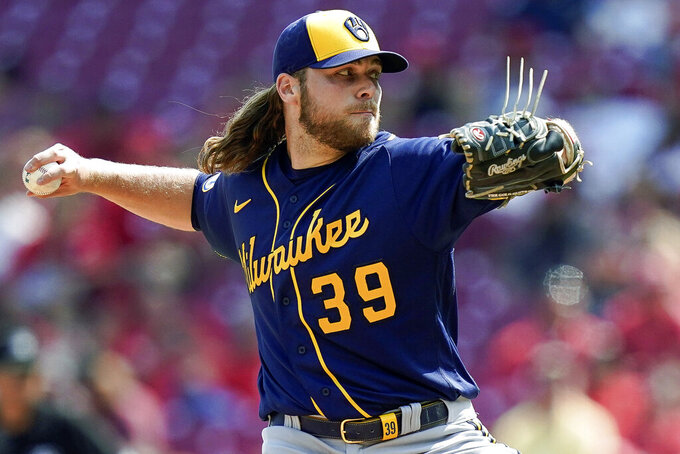 Outlook: The Brewers have reason to believe they can earn a fifth straight playoff berth thanks to their exceptional pitching. Milwaukee’s starting rotation features three 2021 All-Stars in Burnes, Woodruff and Peralta. Hader remains the game’s premier closer. The concern for the Brewers is whether they can get more production from a lineup that produced a total of six runs in a 3-1 Division Series loss to eventual World Series champion Atlanta. The Brewers would love Yelich to recapture his 2018-19 form after two straight disappointing seasons. They’re also hoping Adames builds on the success he had after coming over from Tampa Bay last May. They need Renfroe to replace the production of García, who signed with Miami after hitting 29 homers and knocking in 86 runs last season. Milwaukee signed McCutchen to be the primary DH and play the outfield occasionally.

Outlook: The Cardinals return virtually intact with the exception of Marmol taking over for Shildt, who was fired for what team president John Mozeliak called “philosophical differences” despite a late-season surge and a third straight playoff appearance. The veteran cast of characters should help Marmol in his first go-round as a big league manager. Dickerson is the only major addition to the everyday lineup, and erstwhile slugger Pujols is back to provide a few DH at-bats. Matz joins the rotation but the pitching staff will be minus top starter Jack Flaherty and right-hander Alex Reyes at the beginning of the season. Flaherty has a small labrum tear in his right shoulder and Reyes, an All-Star closer last season before losing that job, is also dealing with shoulder trouble. He was 10-8 with a 3.24 ERA and 29 saves in 69 relief appearances last year. The biggest issue for the Cardinals is rotational depth, and getting both those arms back sooner than later would bode well for another run at the NL Central and a spot in the playoffs.

Outlook: The Reds are a little banged-up already. Castillo and Minor experienced shoulder soreness this spring, which will delay their first appearances. Relief pitcher Tejay Antone likely is out for the season, and third baseman Mike Moustakas hurt his shoulder diving for a grounder and might not be ready for opening day. Cost-cutting by the Reds led to the departure of regulars Suárez, Winker, Castellanos, Barnhart and others. India, the NL Rookie of the Year, and Stephenson will be expected to shoulder more of the offensive load. Votto returns for a 16th season after one of the best years of his career. The Reds have high hopes for rookie pitchers Greene and Lodolo, who have been brought along methodically in the minors and likely are ready. But offense is going to have to come from new and different sources for Cincinnati to contend in the NL Central.

Outlook: Better than the end of last season, but still murky at best. Kris Bryant, Anthony Rizzo and Javier Báez were shipped off ahead of last year’s trade deadline, and the Cubs stumbled to their worst record since they went 66-96 in 2013. The offseason additions of Stroman and Miley should help a pitching staff that finished with a 4.87 ERA last year. While Simmons isn’t much of an offensive threat at this point in his career, he could provide a boost with his glove while playing behind a more contact-oriented rotation. Ross has several new options for his bullpen, and lots of question marks — especially after Codi Heuer was lost for the season to Tommy John surgery. Ross could do a lot of mixing and matching at the beginning of the year as the bullpen shakes out. Schwindel and Wisdom each made the most of increased playing time in 2021, and the Cubs are hoping their performances were a sign of things to come. Frazier is looking to get his career back on track after he was released by the Yankees, and he looked impressive during spring training.

Outlook: The Pirates remain very much in the early stages of a top-to-bottom rebuild as Shelton and general manager Ben Cherington enter their third season together. Pittsburgh’s farm system is now littered with high-end prospects like 2021 top overall pick catcher Henry Davis, 2019 first-round pick pitcher Quinn Priester and 2020 first-round pick infielder Nick Gonzales. That’s the good news. The bad news is their arrival is still likely at least a year away, meaning 2022 could look an awful lot like 2021, when the offense sputtered and the pitching was wildly inconsistent. Reynolds was one of the few bright spots while making his first All-Star Game. He figures to be the fulcrum around which the rest of the lineup swings. Hayes is hoping to be free of the wrist problems that limited him to 96 games. Towering 6-foot-7 shortstop prospect Oneil Cruz appears close to reaching the majors after hitting a home run in a brief appearance last fall and following it up with a solid spring. Yet he is likely to start the season in the minors, perhaps to get more experience in the outfield. Perez will take over the catching duties from Stallings, traded to Miami last fall. Perez will attempt to handle a staff that lacks a true ace. Keller is hoping to finally harness his potential after a wild 2021. Bednar, a Pittsburgh native, was a feel-good story a year ago and figures to open as the team’s closer. He just may not have a ton of opportunities as the front office keeps its eyes firmly on the future rather than the present.