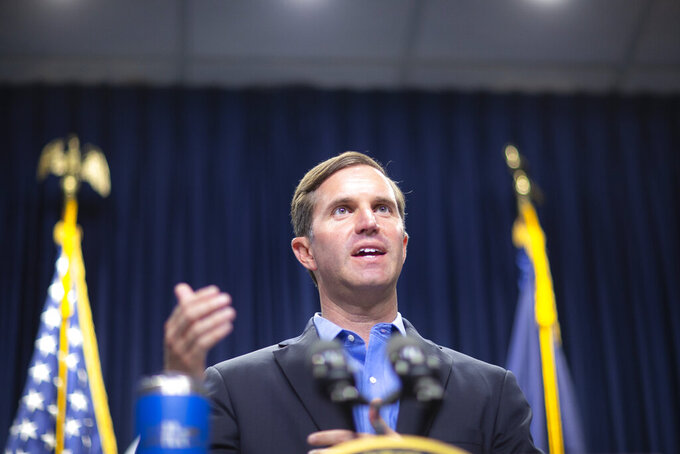 The pay increase takes effect Dec. 16 for social workers and family support services staff, he said. It's the result of the governor's administrative action to reclassify their jobs to a higher grade.

“For far too long, our social workers have not been ... monetarily valued as they should be," Beshear said at a news conference. "Low pay, long hours, crushing caseloads have led to poor morale and high turnover in addition to a backlog of cases.”

More than 3,900 employees are in line for the immediate pay raises, at a cost of about $15 million, he said. Existing funds — due to vacancies within the agency — will cover the expense.

Beshear said the higher pay — part of his broader plan to attract and retain social workers — is long overdue to compensate them for the essential and difficult work they do.

“Often, you are the only lifeline to people at their greatest moment of need,” the Democratic governor said. “You serve the lost, the lonely and the left behind — the exact people that my faith tells me we all have a duty to serve.”

The governor also announced a state pilot program to expedite the hiring of entry-level social workers and family support specialists to help overcome the staffing shortage. The project is intended to condense the hiring process to within seven business days of applying.

The agency, which oversees child welfare, adult protection and other human services, is suffering from chronic vacancies. The state's social workers start at around $34,000 a year. More than 600 social workers have left the Department for Community Based Services this year, he said.

“We do not have the number of social workers we need for the vulnerable folks that need us,” the governor said. “Right now we have too few people and too much need. And there’s no question that some needs out there are going unmet.”

The governor met recently with a group of social workers who expressed the mounting frustration in their ranks over low pay and high caseloads. Beshear previously requested additional funding to hire more social workers, but his proposals failed in the Republican-dominated legislature.

With Kentucky's sustained revenue surge, fueled by strong economic growth, the state can afford the investments to support its social service workers, the governor said Wednesday.

“The dollars are there,” he said. "There’s no excuse not to act.”

“Too often, social service providers and staff interchange roles with those that we serve in receiving food stamps, cash aid and medical assistance just to keep our heads above water," she said at the news conference. "And that should never be.”