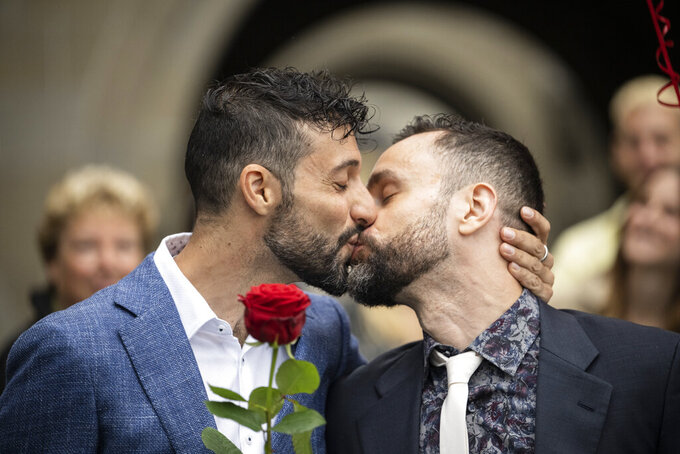 Ennio Leanza, ASSOCIATED PRESS
Luca Morreale and Stefano Perfetti kiss after converting their registered partnership into marriage, at the registry office in Zurich, picture taken on Friday, July 1, 2022. After a yes vote in the "Marriage for All" vote last fall, from July 1, same-sex couples marriage for the first time in Switzerland. (Ennio Leanza/Keystone via AP)

GENEVA (AP) — Lesbian and gay couples in Switzerland rejoiced as they legally tied the knot Friday when the rich Alpine nation formally joined many other western European countries in allowing same-sex marriage, with some saying better late than never.

The first same-sex marriages came about nine months after 64.1% of voters backed the “Marriage for All” law in a national referendum. It puts same-sex partners on an equal legal footing with heterosexual couples, including allowing them to adopt children together and to sponsor a spouse for citizenship.

Friends and family greeted Aline and Laure - who asked that their surnames not be published - with hugs, cheers, applause and a few joyous tears at a Geneva manor house where they exchanged vows to formalize their two-decade relationship.

“It’s great joy, a super moment to put in the history books,” said Laure, 45, a human resources executive, adding that July 1 holds special importance because its the 19th anniversary of their civil union.

Holding Laure's hand, Aline said: “It’s true that Switzerland has been a little slow. It’s not a moment too soon, after all. Now’s the time.”

With a population of 8.5 million, traditionally conservative Switzerland was until Friday among a few western European nations that didn't recognize same-sex marriages. Greece, Italy and the microstates of Andorra, Monaco and San Marino only allow male-female couples to marry.

Most countries in central and eastern Europe do not allow same-sex marriage.