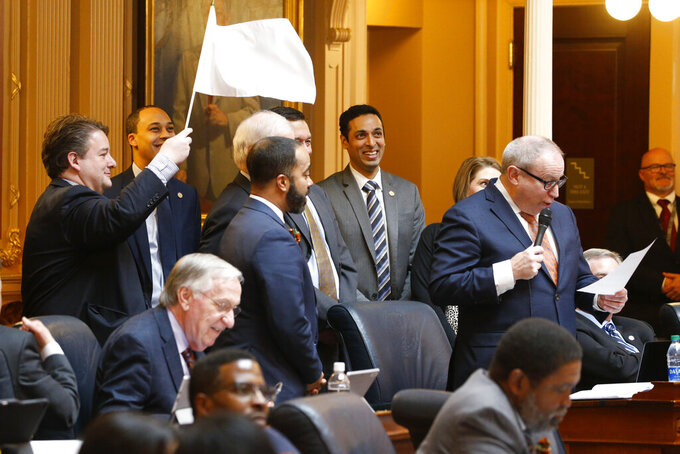 Steve Helber, ASSOCIATED PRESS
FILE - In this Friday Feb. 28, 2020, file photo, Del. Alfonzo Lopez, D-Arlington, left, waves a white flag as Del. Mark Sickles, D-Fairfax, explains another bill during the House session at the Capitol in Richmond, Va. Democrats who have transformed Virginia at whiplash speed over the past two years will be defending their full control of the statehouse in fall 2021. (AP Photo/Steve Helber, File)

RICHMOND, Va. (AP) — Democrats who have transformed Virginia at whiplash speed over the past two years will be defending their full control of the statehouse this fall. But first, they are trying to get an usually high number of House incumbents past primary challenges.

Fourteen House Democrats are spending and organizing against challenges from their own party this year, compared with only three Republican incumbents.

“Like somebody that drinks too many Red Bulls, too much energy is not always healthy for the party,” said Albert Pollard, a former Democratic House delegate who went on to say he thinks the “vast majority” of incumbents will hold on.

Several factors seem to be driving the surge in primary challengers, which is far higher this year than any other since at least 1999, according to the nonpartisan Virginia Public Access Project.

Some observers say it’s just an appealing time to be a Democratic candidate.

David Toscano, the former Democratic minority leader, said he “toiled in the wilderness for years trying to find good candidates” when the party’s membership was in the 30s out of 100 seats.

People thought they would have a hard time raising money or being competitive, he said. And then, even if they won, they would still be part of what at the time was a fairly powerless minority.

“Now the Democrats are in the majority, everybody wants to run,” he said.

In solidly blue northern Virginia in particular, a number of longtime officeholders - including the longest serving delegate, Ken Plum - are being challenged.

Some Democrats are facing challenges from the ideological left, though two of the chamber's most progressive members, Del. Lee Carter and Del. Ibraheem Samirah, also have primary opponents.

“They're learning what it’s like to be in power," said Matt Moran, formerly the chief of staff for Republican House Speaker Kirk Cox. "No one is ever satisfied.”

A handful of delegates who are running in one of the three statewide races for governor, lieutenant governor and attorney general without giving up their House seat have also created potential openings. For instance, Carter, who is making a bid for governor, has two opponents.

At least two Democratic challengers are getting a boost from Clean Virginia, the good governance and environmental advocacy organization founded by wealthy investor Michael Bills as a way to counter the influence of Dominion Energy.

In the Democratic-leaning 79th House District in Hampton Roads, Del. Steve Heretick, one of the caucus' more centrist members, has two primary opponents, Dante' Walston and community organizer and activist Nadarius Clark, who is being backed by Clean Virginia.

Clark, 26, wants to bring a more progressive perspective to Richmond. In an interview, he criticized Heretick's votes against bills allowing localities to remove Confederate monuments, ending qualified immunity and banning assault weapons. The first passed; the others failed.

“This doesn’t sit well with me, and the district deserves a better choice,” Clark said.

Clark's campaign manager, Sully Peterson-Quinn, said the campaign's next finance reports will show Clark has raised over $500,000 in the last quarter, an eye-popping amount for a first-time candidate.

Heretick declined an interview request made through Kate Sarna, spokeswoman for the House Democratic Caucus.

Sarna, speaking generally, said the incumbents have “proven themselves" and their opponents haven't shown an understanding of how they will pass effective legislation.

The state Senate, where Democrats have a more narrow majority, is not up for election this year.

Once the June 8 primary results are in, attention will turn to the November general election, where the stakes are enormous.

Democrats have passed transformative legislation over the past two years that's made Virginia an outlier in the South. They've expanded voting access, loosened abortion restrictions, legalized marijuana, passed a clean energy mandate, repealed the death penalty and raised the minimum wage. Even if a Democrat were to win the race for governor, losing control of the House would make it far more difficult to pass priority legislation in a building where bipartisanship is rare.

In what's seen as a sign of enthusiasm, both parties are contesting an unusually high number of seats. Democrats have candidates in 95 districts, a number that's still in flux, said Grant Fox, spokesperson for the Democratic Party of Virginia. Republicans say they currently have 96.

With only three incumbents to protect in the primary election, and with their slate of statewide candidates already settled in a May convention, Republicans have their eyes on the fall. They are hoping their unusually diverse field of both statewide and House candidates and a backlash against single-party control in Washington will power them to a win.

GOP Del. Emily Brewer, the caucus' deputy campaign chair, said her recruiting efforts were made easier by the Democrats' agenda, particularly what she called a soft-on-crime approach to criminal justice, and schools that were virtual for most of the past year.

“Kids not being in schools really put a toll on the family unit and (was) probably the hardest on mothers. So I think that’s why we have a record number of women running,” she said.

Come September, Pollard said, Virginia is going to look like the final scene of “Braveheart,” where two opposing armies line up for battle.

“It’s going to be hand-to-hand combat," he said. "I give the edge to Democrats.”

This story has been updated to correct the number of House districts in which Democrats currently have a candidate.