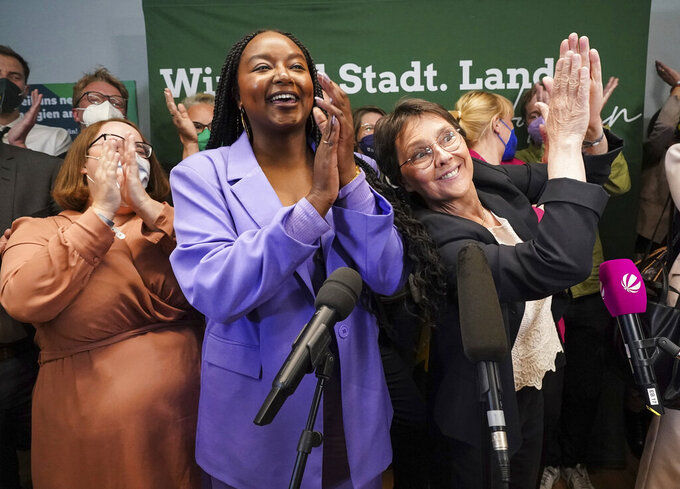 Marcus Brandt, ASSOCIATED PRESS
FILE - Aminata Toure, center, applauds after the first forecasts for the state election in Schleswig-Holstein were announced, in Kiel, Germany, May 8, 2022. The daughter of two Malian refugees has become the first black member of a state government in Germany. Aminata Toure was named Wednesday, June 29 to the Cabinet of Governor Daniel Guenther of Germany's northernmost state of Schleswig-Holstein, on the border with Denmark. (Marcus Brandt/dpa via AP, file)

BERLIN (AP) — The daughter of two Malian refugees has become the first Black member of a state government in Germany.

Aminata Touré was named Wednesday to the Cabinet of Governor Daniel Günther in Germany's northernmost state of Schleswig-Holstein, on the border with Denmark.

The 29-year-old member of the environmentalist Green party will oversee the Social Affairs Ministry in the coalition government led by Günther, a Christian Democrat.

Touré became a state lawmaker in 2017. Two years later she was elected deputy speaker, the first Black person to hold such a position in any of Germany's 16 states.

Speaking at a 2019 event in Berlin with former U.S. President Barack Obama, Touré recounted how she grew up in a refugee camp wondering whether voices like hers would ever be represented in German politics.

Inspired by Obama's successful presidential campaign, Touré said she decided to run for office too.

Germany has never had a Black minister in the federal government. Minority representation in the national parliament has increased in recent years, albeit slowly.