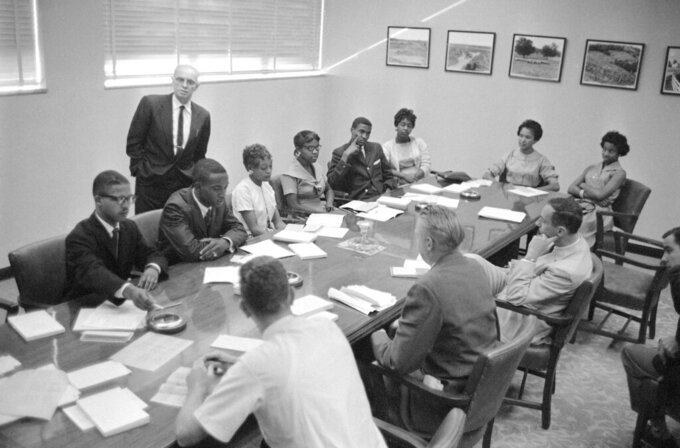 Perry Aycock, ASSOCIATED PRESS
FILE - These eight African-Americans were the first in the history of Memphis State University to register for classes at the formally all white school in Memphis, Tenn., Sept. 10, 1959. At a press conference during registration are from left, Ralph Prater, Luther McClellan, Joyce Gandy, Bertha Rogers, John Simpson, Rosie Blakney, Sammie Burnett and Marvis Kneeland. Dean R.M. Robison is in background. Prater, one of the first Black students to enroll at then-Memphis State University in 1959, died on Sunday, Aug. 7, 2022. He was 81. (AP Photo/Perry Aycock, File)

MEMPHIS, Tenn. (AP) — Ralph Prater, one of the first Black students to enroll at then-Memphis State University in 1959, has died. He was 81.

“Prater’s impact on our institution and community is immeasurable, and we will forever celebrate his remarkable courage and legacy,” the University of Memphis said on social media Tuesday.

The university confirmed his death on its website but did not reveal the cause. He died Sunday.

McClellan said he had recently talked to Prater.

“It was quite a shock to me when I had talked to him about a week ago,” McClellan told the Commercial Appeal on Tuesday. “We used to talk periodically and see how each other was doing. I’m going to miss him.”

McClellan said he rarely saw Prater during the day other than commuting to campus and back.

“There were only eight of us, so we were pretty much segregated from each other during the day,” McClellan said. “I was a math major, he was in political science, so we went to different classes. We didn’t really see each other when we were on campus.”

Prater would take them to school and back in his Chrysler during their first year, McClellan said.

“I have very fond memories of Ralph, ... ” he said. “He was a very giving person. He was kindhearted and was never ever, ever, ever mean-spirited.”