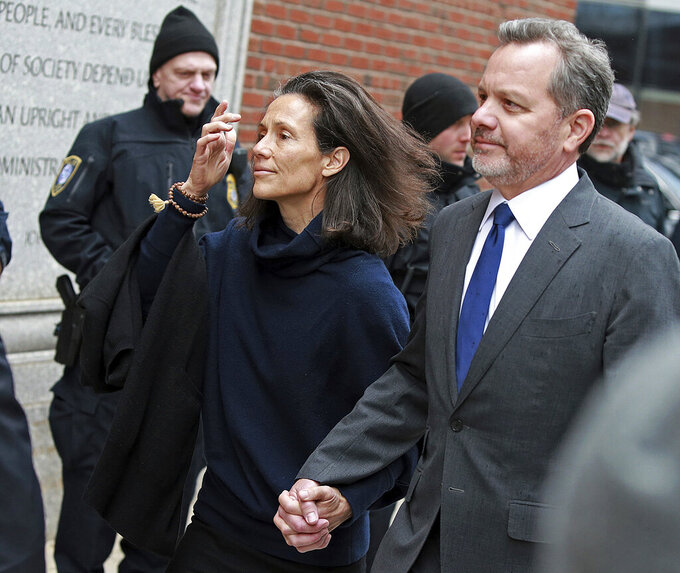 Matt Stone, ASSOCIATED PRESS
FILE - In this Friday, March 29, 2019, file photo, William McGlashan, right, of Mill Valley, Calif., arrives at the federal courthouse in Boston for a hearing in a nationwide college admissions bribery scandal. McGlashan, a former private equity executive who cofounded an investment fund with U2′s Bono was sentenced Wednesday, May 12, 2021, to three months in prison for his role in the college admissions bribery scheme. The former TPG Capital senior executive, admitted in February to paying $50,000 to have someone secretly correct his son's ACT answers. (Matt Stone/The Boston Herald via AP, File)

BOSTON (AP) — A former private equity executive who cofounded an investment fund with U2′s Bono was sentenced Wednesday to three months in prison for his role in the college admissions bribery scheme.

William McGlashan, Jr. appeared at times to fight back tears as he told the judge he was deeply sorry for his actions and was ready to serve his punishment behind bars.

"In a world where fairness is in short supply what I did is totally unacceptable," McGlashan said in the hearing held via videoconference. "I’m totally committed to using my resources and time to making a positive impact in the world the rest of my life," he said.

McGlashan, a former TPG Capital senior executive, admitted in February to paying $50,000 to have someone secretly correct his son’s ACT answers.

Among more than 60 letters of support for McGlashan filed by his lawyers was a letter from McGlashan's son, who told the judge that nothing other than "parental insanity” explains his father's involvement in the scheme.

“He knew better. After everything blew up, I hugged him, and told him that I would have just taken the test again if I hadn’t gotten a good score. We both burst into tears at the stupidity and absurd waste,” his son wrote.

McGlashan, of California, worked with the U2 star Bono and Jeff Skoll, the first president of internet auction site eBay, to launch a social impact fund called the Rise Fund, which says it “invests in companies driving measurable social and environmental impact.”

He was among 50 people arrested in March 2019 in the case dubbed “Operation Varsity Blues," which revealed the lengths some wealthy parents will go to get their kids into top schools.

Thirty parents have pleaded guilty to working with the ringleader of the scheme, admissions consultant Rick Singer, to pay hefty bribes to cheat on entrance exams or get their kids into elite schools with fake athletic credentials.

U.S. District Judge Nathaniel Gorton in Boston, who has sentenced a slew of other parents in the case, said he was once again “dumbfounded and appalled” that McGlashan, whose work centered creating a positive social impact, could have committed such a crime.

“You have let your enormous wealth privilege and pride overwhelm all of what you want to stand for,” Gorton told him.

His three-month prison sentence was agreed upon by prosecutors and the defense as part of his plea deal. Prosecutors agreed to drop three of the four charges he was facing, including accusations involving Singer's so-called “side-door" athletic recruitment scheme.

Prosecutors said McGlashan agreed to pay $250,000 to get his son into the University of Southern California as a football recruit, but ultimately decided not to go through with that plan.

McGlashan was ordered to report to prion on June 9.