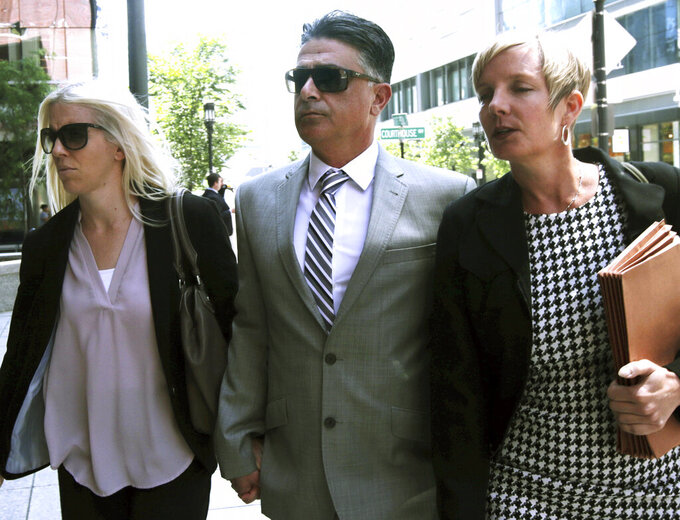 BOSTON (AP) — A former University of Southern California soccer coach who took bribes in exchange for helping unqualified kids into the school was sentenced Wednesday to six months in home confinement after cooperating with authorities investigating the college admissions scandal.

Prosecutors had not been seeking home confinement or prison time for Ali Khosroshahin, citing his quick acceptance of responsibility and his help in prosecuting others in the massive case.

But U.S. District Judge Indira Talwani in Boston decided that prosecutors' recommendation of time served wasn't enough, noting that Khosroshahin dragged his assistant coach into the corrupt scheme, among other things.

Khosroshahin, who was the head women's soccer coach from 2007 to 2013, appeared to fight back tears as he apologized to USC, his former athletes, his family and the deserving students who missed out on an admissions spot because of his “lies and greed.”

“I want to thank the government for bringing this whole thing to light because if they hadn’t, innocent hardworking students may still be shut out of schools simply because they don’t have the money that others have, and people like me might still be facilitating this,” Khosroshahin said.

Khosroshahin is the fifth athletic coach to be sentenced in in the Operation Varsity Blues probe that revealed a scheme to get wealthy kids into top universities through rigged test scores and bogus athletic credentials.

The longest sentence so far for the coaches who accepted bribes — eight months in prison — went to Jorge Salcedo, a former men's soccer coach at the University of California, Los Angeles.

That could change Friday, when ex-Georgetown University tennis coach Gordon Ernst is scheduled to be sentenced for pocketing more than $3 million in bribes. Prosecutors are asking for four years in prison; Ernst's attorneys say he deserves about a year.

Khosroshahin pleaded guilty in 2019 to helping the bribery scheme's mastermind — admissions consultant Rick Singer — conduct “side door" deals to get students admitted as recruits even though they weren't Division I-caliber athletes.

Prosecutors said in court documents that he initially “expressed reticence" at the idea when approached by Singer, but ultimately decided to join the scheme and pull in his assistant coach, Laura Janke.

The two of them “recruited” one or two of Singer's clients to the USC women's soccer team each year, prosecutors said. The bribes were made as payments to the USC soccer program or their private soccer club. Janke was sentenced Tuesday to time served.

“You led someone in a way that really turned their life upside down,” Talwani told Khosroshahin.

Khosroshahin testified at the trial of former Jovan Vavic, the former USC men’s and women’s water polo coach who was convicted by jurors in April.

Khosroshahin's lawyer, Jessica Hedges, told the judge that as soon as he was arrested in March 2019 alongside dozens of other coaches and parents, he tried to make things right. About a month after his arrest, he was already in Boston telling prosecutors everything he had done and even led them to things they didn't know yet.

Of the 57 people charged in connection with the Varsity Blues investigation, 54 were convicted. One person was acquitted by jurors, another was pardoned by former President Donald Trump, and the third received a deferred prosecution agreement that will result in a dismissal of the case as long as he abides by certain conditions.