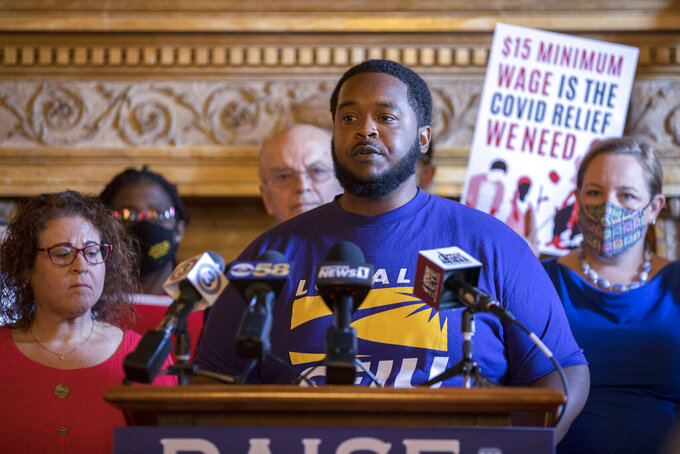 Will Cioci, ASSOCIATED PRESS
James Rudd, a janitorial worker and member of SEIU Local 1 in Milwaukee, speaks at a June 17, 2021, press conference at the Wisconsin State Capitol held by state Sen. Melissa Agard, D-Madison, and Rep. Lisa Subeck, D-Madison, left, to introduce legislation that would raise the state's minimum wage to $15 per hour. "The pandemic made it clear that society works because we do," says Rudd, who has worked cleaning industry jobs for 16 years. (Will Cioci/Wisconsin Watch via AP)

MADISON, Wis. (AP) — For 26-year-old Olivia McKnight, raising the minimum wage to $15 an hour would transform her life.

As a full-time Popeyes employee in Milwaukee, McKnight makes $10 an hour. This isn’t nearly enough to support herself and her three children. She also works a second job. The long work hours have forced her to miss out on time spent with her children, including holidays and key life moments.

For 29-year-old James Rudd, who earns more than $15 an hour now, he is finally able to pay for the things he needs. And he now fights for all workers in Wisconsin to reach at least $15 an hour.

In contrast with McKnight, Rudd’s maintenance job at AT&T’s Milwaukee office cleaning floors and changing light bulbs has made his life easier. He can afford health insurance, bus fare and to keep current on his bills — all of which were out of reach when he earned $7.25 or $8 an hour.

That’s where McKnight is now.

“I try to provide for my family day to day, month to month, paying rent, paying electric, lights, and trying to find babysitters,” she said. “It’s definitely hard, it takes the majority of my time away, and it’s like I’m almost working for pennies.”

The nonprofit news outlet Wisconsin Watch provided this article to The Associated Press through a collaboration with Institute for Nonprofit News.

Roughly 1 million hourly workers nationwide earn the federal minimum wage of $7.25 an hour or less. Like others fed up with low earnings, McKnight recently joined the Fight for $15, a global political movement working to increase the minimum wage for all underpaid workers.

In Wisconsin, where the racial wealth and income gaps are some of the greatest in the nation, many feel raising the minimum is long overdue. According to a 2019 Marquette Law School Poll, 55% of Wisconsinites support raising the minimum wage, while 39% oppose it. And Black women like McKnight are among those who would benefit the most from it.

Because of grassroots movements like the Fight for $15 and growing political support, eight states and the District of Columbia have already passed legislation to raise the wage to $15 an hour, most recently Florida, according to the UC Berkeley Labor Center.

But not Wisconsin. It is among 21 states whose minimum wage matches the federal level of $7.25 an hour. In 10 other states, the minimum is higher but still under $10, the UC Berkeley Labor Center reports.

Legislators, activists and community members have organized, lobbied and proposed changes to the federal and state-level wages for years, well before Democrats tried unsuccessfully to include a federal $15 minimum wage in the pandemic relief package passed in February 2021. `

In January, Democrats reintroduced the Raise the Wage Act, which would gradually increase the federal minimum wage to $15 per hour by 2025 and end pay below-the-minimum wage for tipped workers. Under the bill, the minimum wage would increase immediately to $9.50 an hour, then to $11 per hour next year, $12.50 in 2023, $14 in 2024 and then $15 in 2025. A similar bill was introduced in 2019 but never cleared the GOP-controlled Senate.

The main reason minimum wage bills have stalled: Opponents argue that raising it would force many businesses to close or cut their workforces, resulting in fewer jobs.

A recent Congressional Budget Office report estimated that implementing a nationwide minimum of $15 an hour would lift nearly 1 million people out of poverty — but employment would be reduced by 1.4 million workers. Wisconsin Manufacturers and Commerce, a powerful business lobby, argues raising the minimum wage would reduce opportunities for entry-level workers by making it more expensive for companies to hire them.

“I think that’s a profound finding,” said Marc Levine, co-founder of the center who led the study. “It tells us a lot about not only our history, but about what’s happening today in Milwaukee and how little progress it has made.”

Levine’s recent research focuses on Black communities and how they fare in the nation’s 50 largest metropolitan areas on issues including housing segregation, incarceration, poverty and income. On nearly every measure, Milwaukee comes out at or near the bottom. Wisconsin’s largest city, he said, “represents the archetype of modern-day metropolitan racial apartheid and inequality.”

For Wisconsin state Sen. Melissa Agard, the issue of raising the minimum wage is a moral one. Far too many people in the state who are working 40 hours a week — and who are disproportionately people of color — are still unable to take care of themselves and their families with dignity, she said.

On June 17, Agard announced she would reintroduce legislation to raise the minimum wage to $15 in Wisconsin. She said it is “embarrassing” and “shameful” that the minimum hourly wage in the state has been frozen at $7.25 since 2009.

Many minimum-wage workers are forced to rely on public assistance programs, which cost the state billions. Addressing income inequality, in part by raising the minimum wage, could actually save the state money in respect to government-funded assistance programs because people would be able to better support themselves and their families, Agard said.

“Increased wages mean less people (are) reliant on government assistance for food, health care and other essentials,” she said. “In the richest country on the planet, no one should work full time and live in poverty.”

The UC Berkeley Labor Center found that 45% of workers in Wisconsin who would receive a pay boost if the Raise the Wage Act were passed are currently enrolled in one or more public assistance programs, including Medicaid, FoodShare and the Earned Income Tax Credit. Those working class employees are supported by an estimated $2.4 billion in public assistance programs in Wisconsin, the Labor Center estimated.

Wisconsin Manufacturers and Commerce is a major voice of opposition to raising the minimum wage. The group argues that the biggest issue facing employers is a lack of skilled workers, and that the state should focus on training workers and incentivizing young professionals and college graduates to remain in the state.

The powerful business group did not respond to requests for comment. But in its legislative agenda, WMC stated that “raising the minimum wage will increase the cost of employing entry level workers, resulting in fewer job opportunities for workers entering the workforce who need to build skills and experience for their career.”

In addition, the Congressional Budget Office projected that the reduction in employment would increase spending for programs such as unemployment compensation. It also projected the costs of goods and services would increase, leading consumers to limit purchases and employers to reduce their employment.

After attempting to push through the bill in 2015 and 2017, the senator invited her Republican colleagues to join her. “Everyone deserves economic security,” she said.

Another Democratic-backed proposal in Wisconsin would ensure tipped employees currently making $2.13 or $2.33 an hour are compensated the same minimum wage as the rest of the workforce. Sen. Chris Larson of Milwaukee and Rep. Francesca Hong of Madison are sponsors of the measure.

“This wage is simply not enough,” Larson said at a March press conference introducing the legislation. “Up to 60% of tipped workers report that their tipped wages are too low to meet unemployment thresholds, and 46% rely on public assistance for basic survival.”

Larissa Joanna, a restaurant worker and single mother of two, said such a change would have helped her. She described getting paid the sub-minimum wage at her past restaurant jobs as dehumanizing. Having to rely so heavily on tips from customers to support her family made her stressed and worried.

For the past three years Joanna has worked as a manager at a Madison restaurant that starts every employee at the $7.25 minimum wage, plus tips. But she continues to fight for a higher wage for others because she knows what it’s like to work hard and yet not earn enough to support a family.

And she can never make up for lost time with her sons — one of whom has autism, attention deficit hyperactivity disorder and speech delays — while she worked two jobs just to make ends meet.

“Unfortunately I had to spend that time away from my children, and if we were all making better pay it would be beneficial for everyone as a whole including our children,” Joanna said.

“Fifteen dollars is just a start. We want to take vacations. We want to be able to live the American dream," Rudd said.