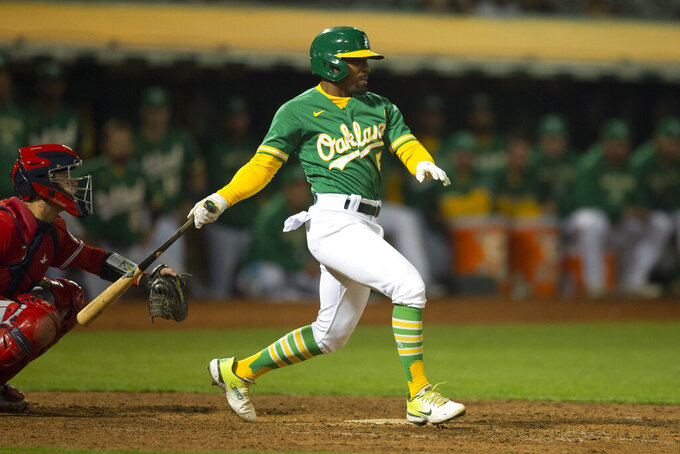 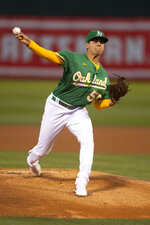 OAKLAND, Calif. (AP) — Pinch hitter Tony Kemp had an RBI single in the bottom of the 10th inning, capping a spirited comeback that sent the Oakland Athletics to a 5-4 victory over the Los Angeles Angels on Monday night.

Cristian Bride’s sacrifice bunt leading off the inning against Angels reliever Zack Weiss (0-1) advanced automatic runner Jonah Bride to third, and Kemp punched a single through the right side of the infield to drive in the winning run.

“This is a really good team win,” Oakland manager Mark Kotsay said. “A lot of excitement there late in the game, the energy picked up in the dugout. It was great to see.”

The A’s trailed 4-2 going into the bottom of the ninth and were down to their last out when Seth Brown’s two-run single off Aaron Loup tied it. Loup blew his fifth save in six attempts.

“It’s huge, especially for all the young guys, to watch how they battled and the resiliency they showed,” Kemp said. “It’s a lot of the things that they can build off of and learn from and take into next year.”

Kemp said he was sitting on a slider — Weiss’ favorite pitch to left-handers — after looking at a first-pitch fastball.

“Once I saw the slider pop, I just tried to get on top of it and not get under it,” Kemp said. “Luckily the first baseman didn’t make the play.”

Domingo Acevedo (4-4) pitched a scoreless 10th inning for the win.

The Angels were one out away from extending their season-high winning streak to eight games, which would have been their longest since a 10-game streak Sept. 4-13, 2014.

Shohei Ohtani was 1 for 4 with a double to extend his career-high hitting streak to 18 games, and Liván Soto and Taylor Ward each had two hits for the Angels.

Allen had two hits for Oakland, which has won two straight after losing six in a row.

The Angels broke a scoreless tie in the bottom of the fourth on Jo Adell’s two-out, two-run bases-loaded single that slipped through the hole on the left side of the infield.

A’s starter Adrián Martínez gave up four runs and seven hits and two walks and struck out five in 4 1/3 innings.

Angels starter Patrick Sandoval left the game with a 4-0 lead after throwing six innings of five-hit ball. Sandoval who struck out six and gave up one walk, has a 1.83 ERA over his last 10 starts.

“Over a full season to be under three is a pretty big accomplishment for myself, and something I kind of set out to do, so I’m pretty pleased with that,” Sandoval said.

Anthony Rendon returned the lineup for the first time since going on the injured list June 17 with right wrist inflammation, for which the Angels star third baseman underwent surgery.

Rendon was 0 for 2 with two strikeouts and made a throwing error at third before being replaced by Luis Rengifo in the bottom of the fourth.

Rendon, who is in the third year of a seven-year $245 million contract, was activated Wednesday, but had to serve a five-game suspension for his role in a brawl in a game against Seattle.

Angels: RHP Michael Lorenzen (8-6, 4.52 ERA) pitched five innings of three-hit ball Wednesday in a 4-1 win against Oakland. He has a 3.05 ERA in four September starts.

“Writing the name in there is pretty cool for me,” Nevin said. “He’ll be back in there tomorrow. He feels good. He’ll go longer in the game if not the whole game, so I’m excited for him.