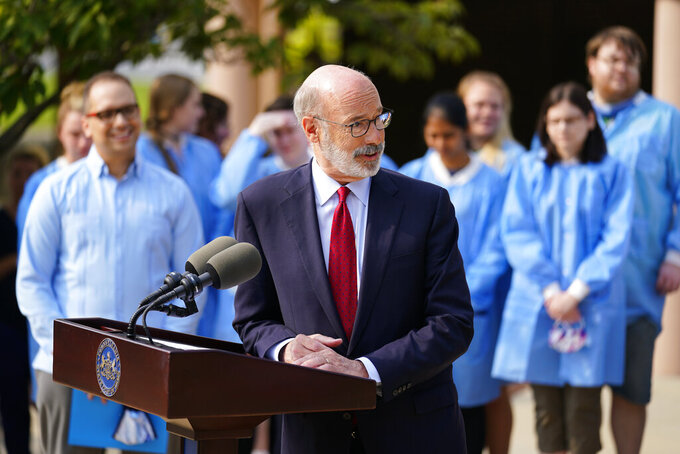 Pennsylvania residents who are unvaccinated against the coronavirus were far more likely to contract COVID-19, become hospitalized and die than those who got the shot, health officials said Tuesday in the first public release of data on so-called “breakthrough" infections in the state.

More than 35,000 people who were fully vaccinated have tested positive for the virus since January, representing only 6% of all cases statewide, according to the data released Tuesday. More than 1,800 vaccinated people were hospitalized and 213 died — both representing a tiny fraction of all COVID-19-related hospitalizations and deaths since the beginning of the year, the data show.

The relative scarcity of milder breakthrough cases among residents who got the vaccine shows the shots are working, state health officials said.

“My hope is is that this data encourages everyone who has not been vaccinated to speak to their doctor about getting the vaccine as soon as possible," Acting Health Secretary Alison Beam said at a news conference in Lancaster.

“The data that we have is showing once again that even as the more transmissible delta becomes more widespread, the COVID vaccines are safe, are effective and help prevent serious illness and death," she said.

Top GOP lawmakers had requested the data on breakthroughs. The Republicans, who have been skeptical of Wolf’s pandemic measures — including, most recently, his statewide mask mandate for schools — wrote to Wolf last week that “all Pennsylvanians, both vaccinated and unvaccinated, deserve to know how their respective group is performing.”

Wolf promised his administration would release the information, and went further.

Noting that vaccination efforts are lagging in some areas of the state — including those with GOP representation — he vowed to release vaccination reports by legislative district “so that the General Assembly and public can better understand how well each member’s district is performing.”

The hospitalization statistics released Tuesday account for data reported by 55% of Pennsylvania hospitals representing 80% of the state's acute-care beds.

In other coronavirus-related developments in Pennsylvania on Tuesday:

A Wolf administration program that allowed Pennsylvania businesses to seek waivers to remain open in the early days of the coronavirus pandemic was deeply flawed, using criteria that shifted constantly and giving inconsistent and subjective answers to business owners struggling to stay afloat, the state’s chief fiscal watchdog said Tuesday.

Auditor General Timothy DeFoor, a first-term Republican, said he found no evidence that political pressure played a role in the state's determinations on which businesses would be permitted to stay open and which would have to remain closed.

Rather, DeFoor said at a news conference in Harrisburg, the waiver program was thrown together in haste and suffered from a lack of uniformity, clarity and transparency, resulting in frustrated business owners and some questionable decisions that caused unnecessary harm.

“Our audit revealed a flawed process that provided inconsistent answers to business owners and caused confusion,” he said. ”The waiver process was hastily assembled on the fly and unevenly administered."

Wolf closed businesses deemed “non-life-sustaining” to help slow the spread of the coronavirus, but established a waiver program run by the Department of Community and Economic Development under which tens of thousands of businesses applied to remain open during the pandemic.

Many small-business owners complained bitterly about the business shutdown, and said the waiver program allowed some businesses to operate during the pandemic while forcing nearly identical businesses to shut down.

The audit was launched by DeFoor’s predecessor, Democrat Eugene DePasquale, and its conclusions were similar to the preliminary findings that DePasquale released last October. At the time, DePasquale had called the waiver process a “Keystone Kops routine.”

The Wolf administration disagreed with some of the audit’s findings, and lauded agency staff for developing “literally overnight” a massive program that normally would have required months of planning and preparation.

“While we all hope that there is no need for another business waiver program in the future, we certainly want to learn from prior experience in the event that a similar program ever becomes necessary again,” Dennis Davin, Wolf’s economic development secretary, said in a formal response to DeFoor.

The state got 42,380 waiver requests, and granted more than 7,000 of them, DeFoor said. He said that businesses with the right connections tended to get quicker answers.

Audit staff scrutinized 150 waiver applications, concluding that the decisions issued to 103 of the businesses “appeared reasonable,” the review said. Auditors questioned the responses given to 45 businesses. Two of the businesses received no response to their waiver request.

“These questionable decisions had real-life negative consequences to businesses that should have been able to operate but instead were told they had to close,” DeFoor said at the news conference. He said that auditors “were concerned with the extent of subjectivity involved in making these decisions.”

The audit covered a period between March and June 2020, at the beginning of the pandemic, when Wolf shuttered tens of thousands of businesses, ordered people to stay at home and limited the size of gatherings.

Appearing at a vaccine clinic in Reading, Wolf noted that children under 12 are not yet eligible for the COVID-19 vaccine.

His administration’s mask mandate for schools has generated fierce pushback from a subset of parents and students. At least two lawsuits have been filed seeking to overturn it. Some school districts are allowing students to go unmasked with a parent’s signature instead of a doctor’s note, which the state Education Department says doesn’t comply with the masking order.