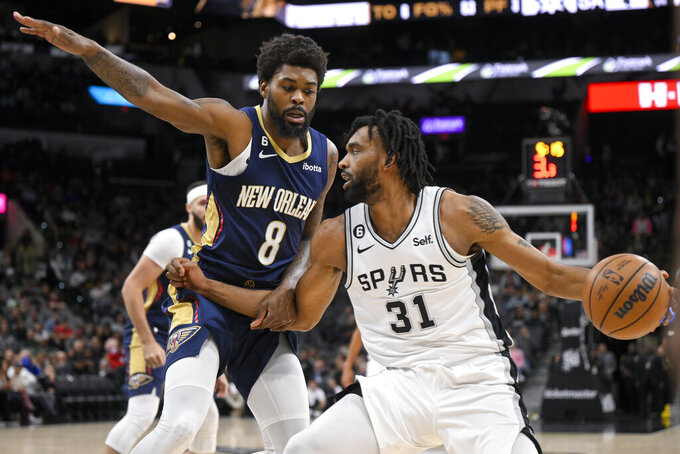 SAN ANTONIO (AP) — New Orleans forward Zion Williamson is starting to feel like his self again. San Antonio can attest to that.

Williamson had a season-high 32 points along with 11 rebounds and the Pelicans never trailed while handing the Spurs their sixth straight loss, 129-110 on Wednesday night.

“Zion was a monster from start to finish,” New Orleans coach Willie Green said. “Driving the ball, kicking it about to his teammates. Taking advantage of mismatches. Defensively, I thought he was really solid tonight. Just in the right spots, communicating, switching with contact, all the things we work on. Monster game by Z tonight.”

Williamson, who missed all of last season following surgery to repair a fractured right foot, has had two consecutive solid outings. He was limited to nine points in a 128-83 victory over Golden State on Monday night, but his defensive effort was key.

“Defensively, I’m starting to find my movements and feeling the game out,” Williamson said. “Really seeing the game. I was happy about last game (defensively). This game, it just trickled over to my offense.”

Williamson was 14 for 18 from the field while scoring 28 points in the paint.

Even with C.J. McCollum out due to an illness, the Pelicans extended their lead to 24 points in the fourth quarter in winning for the seventh time in nine games.

San Antonio’s reserves went on an 11-0 run to cut New Orleans’ lead to 118-102 with 3:20 remaining, but the game was essentially decided in the opening minutes.

Jonas Valanciunas finished with 22 points and 10 rebounds for New Orleans.

The Spurs missed their first eight shots of the game as the Pelicans raced to a 21-6 lead. San Antonio would follow that by scoring four points in the first 4 1/2 minutes of the second quarter.

Williamson and Valanciunas dominated the paint early, combing to score 18 points on 7 for 9 shooting in the first 6 1/2 minutes of the game.

“Well, obviously we didn’t figure it out,” San Antonio coach Gregg Popovich said of defending Williamson. “But there is a reason why he got picked where he got picked. He’s pretty good.”

Pelicans: McCollum was a late scratch due to an illness. “He just wasn’t feeling well,” Green said. “He’s been dealing with a bit of a cold or something like that. He was just tired today. Wasn’t feeling up to it. Hopefully he’ll get better over the next couple of days.” … Williamson flexed his right biceps as Jeremy Sochan tumbled to the court while failing to prevent a layup by the Pelicans’ 285-pound forward. San Antonio called a full timeout after the basket, which put New Orleans ahead 37-19 with 9:31 remaining in the first half. … Trey Murphy missed the game with a bruised right foot.

Spurs: Johnson collected his 1,000th career rebound. He joins Manu Ginobili as the only players in franchise history with 2,000 points, 1,000 rebounds and 250 3-pointers in their first four seasons in the league. … San Antonio is 1-11 in November after opening the season 5-2. … The Spurs scored 47 points in the first half, their second lowest in the first half this season. … G Romeo Langford returned from a five-game absence while following the league’s health and safety protocols.

Pelicans: At Memphis on Friday night.

Spurs: Face the Los Angeles Lakers on Friday night in the first of a two-game home set.