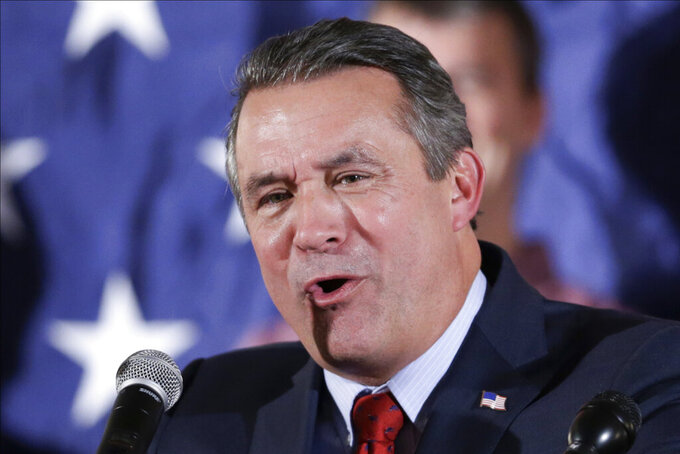 OMAHA, Neb. (AP) — Republican Rep. Don Bacon won a fourth term Tuesday in the Omaha-based 2nd Congressional District, which is typically Nebraska’s only competitive U.S. House district and is one the GOP has tried to tighten its hold on through redistricting.

It was a tight race that saw Bacon squeeze past Democrat Tony Vargas, a state lawmaker from Omaha who touted his experience as a former teacher and member of the Omaha Public Schools Board.

Bacon, a retired Air Force brigadier general, said early Wednesday morning that he plans to focus on supporting some local projects, including the rebuilding of Offutt Air Force Base located just south of Omaha. On the national front, his plans include a push to increase the pay of enlisted military members — some of whom have families relying on food stamps and charitable pantries.

“It's an embarrassment,” he said.

Bacon has held the seat since defeating an incumbent Democrat in 2016, and he had to work hard to be reelected twice, both times over Democrat Kara Eastman. Bacon has a conservative voting record but has been criticized by former President Donald Trump because he backed an infrastructure bill supported by Democrats.

The Democratic Congressional Campaign Committee named the district as one of its top competitive House districts that were either open or held by Republicans. During the campaign, Bacon largely dropped the folksy campaign ads he previously favored that tended to play on his name — with quips about “bringing home the Bacon,” and “who doesn’t love Bacon?” — and instead turned to ads that called Vargas “Taxing Tony.”

Republicans have twice redrawn district boundaries in an attempt to to help their party’s candidates, in part because of embarrassment that under Nebraska’s unusual Electoral College rules, Democratic presidential candidate Barack Obama won a 2nd District vote in 2008 and Democrat Joe Biden did the same in 2020.

Maine is the only other state that allows its electoral votes to be split between candidates.

In 2011, Republicans successfully redrew the district’s lines to cleave off suburban Bellevue and include more of the conservative suburbs in Sarpy County. GOP lawmakers tried a similar move in 2021, but facing Democratic opposition, they managed to make the district only slightly more conservative, as Biden still would have won with the redrawn boundaries.

Republicans were expected to have less trouble keeping control of Nebraska’s two other congressional districts.

In the 1st District, which includes Lincoln and all or part of a dozen counties in eastern Nebraska, Republican Rep. Mike Flood defeated Democratic challenger Patty Pansing Brooks. The race was a rematch of the special election earlier this year between the two, in which Flood was elected to replace former Republican Rep. Jeff Fortenberry, who resigned after being convicted of campaign finance violations.

Flood celebrated the win in his hometown of Norfolk and said his top priority would be fighting inflation. Asked how he would do so, Flood criticized Democrats’ investment package to fight climate change and increase renewable energy production.

“I will vote for energy independence,” Flood said. That includes supporting policies that increase domestic production of oil and natural gas to “one, keep prices low, and two, increase our national security by decreasing our dependence on foreign nations like Saudi Arabia.”