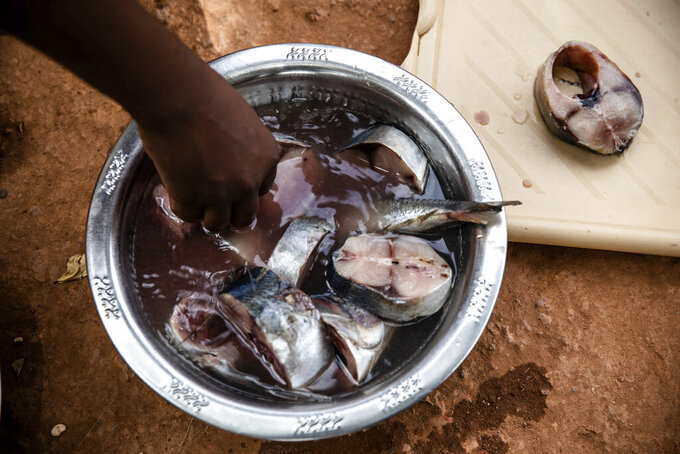 Sophie Garcia, ASSOCIATED PRESS
Mariama Sawadogo, 44, who works as a radio host at Zama Radio, prepares lunch at her home in Kaya, Burkina Faso, Monday, Oct. 25, 2021. Many guests and listeners in Burkina Faso call her "aunty" as she gently guides them to the right answers and awards prizes such as soap and washing buckets. In the West African country of Burkina Faso, many feel the government has let them down during the pandemic. Tests, vaccines and messaging often miss many residents, despite a $200 million budget for virus-response efforts. In a region where women are responsible for family work and community relationships, they’ve stepped up to fill in gaps. (AP Photo/Sophie Garcia)

KAYA, Burkina Faso (AP) — Mariama Sawadogo sits in a small studio, translating notes from French to the local language of Moore and scribbling talking points in the margins. Transmission, prevention, vaccination — Sawadogo hits these topics in her bimonthly radio show on Zama FM, interviewing doctors and nurses about COVID-19 and testing callers on their knowledge.

Many guests and listeners in Burkina Faso call her “aunty” as she gently guides them to the right answers and awards prizes such as soap and washing buckets.

Sawadogo’s voice has become a familiar sound for nearly a million people in her town of Kaya and beyond, northeast of the capital in this West African country, where many feel the government has let them down during the pandemic. Hungry for any information about the virus, mothers huddle together outside to tune in to Sawadogo's show, sharing rare mobile phones in slivers of shade while their children play nearby.

Tests, vaccines and public messaging often miss many of the country’s 20 million residents, despite a $200 million budget for virus response efforts. In a region where women are responsible for family work and community relationships, they’ve stepped up to provide a collective authoritative voice, make and deliver supplies, and find ways to support their families through the economic crisis.

This story is part of a yearlong series on how the pandemic is impacting women in Africa, most acutely in the least developed countries. AP’s series is funded by the European Journalism Centre’s European Development Journalism Grants program, which is supported by the Bill & Melinda Gates Foundation. AP is responsible for all content.

“They didn’t help us,” Mamounata Ouedraogo said of the government. “If we expected to get our information from them, we would never have any.”

Like Sawadogo, she lives in Kaya, one of the last safe havens in the conflict-plagued country, where tens of thousands of displaced people have sought shelter as violence that spilled over from neighboring Mali in 2015 escalates and jihadi attacks encroach on major towns. Ouedraogo listens to all of Sawadogo’s shows and said she’d know little about the virus without them.

Norbert Ramde, head of Burkina Faso’s doctors' association, said diseases like malaria, AIDS and tuberculosis are higher priorities for the government and medical community — and beyond disease, jihadis are the biggest threat.

“Do you want us to take all the resources to combat COVID-19 and forget about this?” he said. “We have to invest in that, too.”

But Burkina Faso was hard hit when the pandemic struck last March, recording some of Africa’s highest infection numbers and death rates. Officials implemented curfews, sealed the landlocked country’s borders, and closed mosques, churches, schools and markets. Many residents protested and, after just a few weeks, most restrictions were lifted.

“The priority for the government is to convince the population, not to take some measures which will be very aggressive,” said Dr. Brice Bicaba, the government epidemiologist who leads Burkina Faso’s coronavirus response.

He said officials have opted to work through community leaders and local associations to get residents to understand the dangers of the virus and police their own behavior, rather than reimpose restrictions and risk protests and conflict — a concern for Burkina Faso’s young government since an uprising ousted the longtime president in 2014.

Part of the millions for virus response went toward flyers, radio and TV messaging, and other community engagement measures, in addition to the creation of labs and the purchasing of medical supplies and tests, according to Bicaba and budget documents.

But many health professionals and citizens said those messaging efforts aren’t reaching all the people they need to. In Kaya, officials held one public meeting in December to provide general information, but locals said they would have preferred door-to-door visits to better explain preventative measures and give specifics on how the virus is contracted.

Even in the capital, Ouagadougou, which is 60 miles (85 kilometers) from Kaya, messaging hasn’t been widespread, with billboards and signs about masks, handwashing and vaccination scarce.

In Ouagadougou, Zenabou Coulibaly Zongo spends her own money making soap and buying hand sanitizer for mosques, markets and health centers. At the start of the pandemic, Zongo, now 63, was hospitalized with bronchial pneumonia. She paid out of pocket for two weeks’ worth of oxygen treatments at a private clinic, where she watched others die from respiratory problems.

“It was a wake-up call, because I envisioned coronavirus spreading like it did in Europe,” she said.

Now, despite her asthma putting her more at risk, Zongo delivers her soaps and uses her visits to instruct people about COVID-19 and vaccines. During a recent visit to a mosque, some people told Zongo, who is highly regarded in her community as the founder of the Council of Burkinabe Women, that they didn’t know vaccine shots were free until she provided the information.

Health experts say governments must take the lead, but that community engagement serves as the bedrock of emergency responses.

Many both inside and outside Burkina Faso don't trust the virus data provided by the government — 15,514 cases and 265 deaths — noting a lack of testing and a health system the U.N. has called among the world’s weakest.

Many people don’t come to hospitals and instead die at home, so likely aren’t included in official counts. And the government already was struggling before the pandemic with the humanitarian crisis fueled by jihadi violence linked to al-Qaida and the Islamic State group, preventing people from accessing health clinics and virus testing.

Amid the chaotic atmosphere — with the military struggling to stem the violence and an ultimatum from the opposition to the president — misinformation has flourished. Sawadogo’s radio presence serves as a leading voice to fight it. She hears from cynical listeners who say the pandemic was created to mislead Black people and that the vaccine will sterilize them. Some outright accuse her of lying.

But the mother of three boys is accustomed to naysayers and skeptics. In 2007, she left her first husband despite a strong cultural aversion to divorce, in part because he wouldn’t let her work as an Islamic woman. She wanted to be financially independent so she went to night school and became an accountant.

Her internship was at Radio Zama, where her bosses sensed a strong radio presence after she recorded some ads. So in 2016, she started hosting shows. When the station got funding from the European Union for the virus show, she was a natural choice.

“You’re on Zama FM. How are you doing?” Sawadogo greets callers. “What’s your name, and where are you calling from?” She speaks to guests and listeners like family.

“Sometimes after the show, people will call me personally and say ‘Our family didn’t believe in the disease, but since they have been listening, they now believe,’” Sawadogo said. "When you realize that thousands of people listen to your voice, you realize that they consider what you say, you’re just proud.”

That keeps her going through long days as she also takes care of her boys, prepares meals and endures long waits to see her husband. He sells grain in the country’s Sahel region; they see each other just once every two weeks.

Women in the community say Sawadogo, 44, is doing more than just teaching people about COVID-19 — she’s a role model for them and their daughters in a society dominated and controlled by men.

Sawadogo urges her whole community to tune in, but focuses on women in particular — they’re the healers and caretakers when people fall ill with coronavirus, just as they were during West Africa’s Ebola crisis from 2014 to 2016. Her listeners say if the host was a man, he wouldn't take the time and care she does to encourage them.

“As a woman, she raises the name of women,” said Zenabou Sawadogo, 31, a mother of six, including two girls who listen to the show with her.

Families in Burkina Faso are grappling not just with COVID-19, but also with the country’s escalating violence and collapsing economy. Zenabou Sawadogo’s husband has been unable to work mining gold because jihadi fighting has cut access to sites, meaning he can’t earn a living and they can’t afford to send their 11-year-old daughter to school.

Some families have had to cut back on feeding their children — from three meals a day to two or even one. Women who used to sell clothes and food in neighboring Ivory Coast can’t because borders are closed. And during the pandemic, more women have been asking for aid from private banks that help impoverished people.

Burkina Faso’s latest coronavirus struggle involves vaccination. Despite being part of COVAX, the U.N.-backed program to provide shots to developing nations, the nation was one of the last countries in the world to receive shots.

The government delayed the work needed get the vaccines: paperwork, waivers and distribution plans. It finally gave the first vaccines in June. By the end of October, about 284,000 people — less than 1.5% of Burkina Faso's population — were fully vaccinated, according to World Health Organization figures.

Vaccine hesitancy runs so deep in Burkina Faso that even radio host Sawadogo has yet to receive a jab, though she interviews doctors who advise all citizens to be immunized against COVID-19 and urges her listeners to do so.

She worries about links between the shots and rare blood clots in women, widely publicized during a fumbled rollout of the AstraZeneca vaccine in Europe. She said even though a nurse reassured her, she's not yet convinced it's safe.

"If your blood clots, the result is death,” she said. “I want to be vaccinated, but the issue of blood clots frightens me.”

Zongo, the soap-maker in the capital, also isn't vaccinated, insisting she first wants to finish medication she’s taking from a recent accident. Both women are part of a widening gender gap that experts fear means African women are the world's least vaccinated population.

But Zongo and Sawadogo say they’ll eventually be vaccinated and they’ll continue to spread their messages about the pandemic and advocate for women.

This story is part of a yearlong series on how the pandemic is impacting women in Africa, most acutely in the least developed countries. AP’s series is funded by the European Journalism Centre’s European Development Journalism Grants program, which is supported by the Bill & Melinda Gates Foundation. AP is responsible for all content.

See the full series on how the pandemic is affecting women in Africa: https://apnews.com/hub/women-the-eyes-of-africa