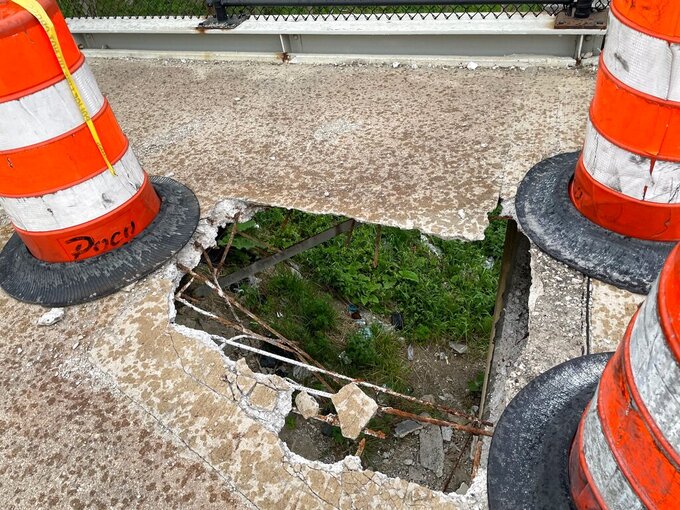 Kevin Hardy, ASSOCIATED PRESS
The ground below an elevated pedestrian bridge spanning the M-10 Lodge freeway in Detroit is visible through a hole in the concrete, large enough for a person to fall through. Ely Hydes, walking the footbridge to a Detroit Tigers game said he fell 15 feet to the ground when part of the concrete collapsed on May 9, 2022. But the bridge still was open for days until The Detroit News reached out to the state Transportation Department on Sunday, May 15. (Kevin Hardy/Detroit News via AP)

DETROIT (AP) — A man walking on a footbridge to a Detroit Tigers game said he fell 15 feet (4.6 meters) to the ground when part of the concrete collapsed.

Ely Hydes said the incident occurred May 9, but the bridge still was open until The Detroit News reached out to the state Transportation Department on Sunday.

The Spruce Street pedestrian bridge is above M-10, also known as the Lodge Freeway. Hydes said he was walking to Comerica Park with a friend when “the bridge just collapsed under my feet.”

“I remember thinking, ‘I hope I’m not over the freeway.’ I landed about six feet from the traffic. ... After I hit the ground I got the wind knocked out of me pretty good," Hydes, 36, told the newspaper.

He informed police, then resumed his walk to the Tigers game, a 2-0 loss to Oakland. Hydes went to a hospital a few days later.

The Transportation Department said it wasn't aware of the hole in the bridge until notified by the newspaper.

“The Spruce pedestrian bridge was built in 1953 and based on its age and condition, it is on a yearly detailed bridge inspection that is due this month," spokeswoman Diane Cross said.

In 2019, Hydes caught a home run hit by Albert Pujols, the slugger’s 2,000th career RBI. He gave the ball to the Baseball Hall of Fame.

“Crazy things happen to me when I’m going to Tigers games — good and bad,” Hydes said.