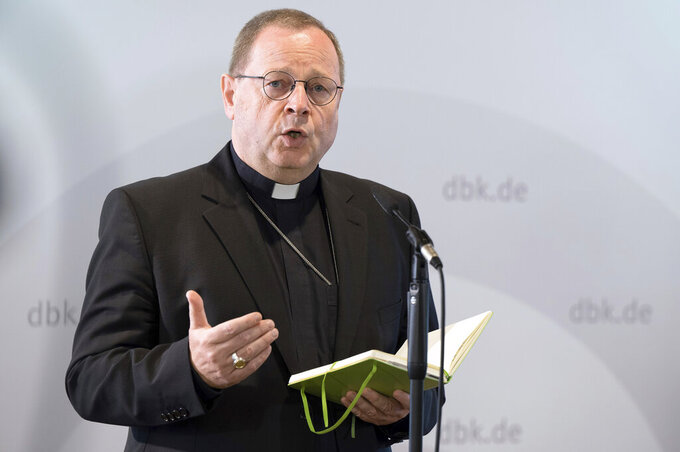 Sebastian Gollnow, ASSOCIATED PRESS
Georg Baetzing, Bishop of Limburg and President of the German Bishops' Conference, speaks at a press conference at the beginning of the Autumn Plenary Assembly of the German Bishops' Conference in Fulda, Germany, Monday, sept. 20, 2021. The Autumn Plenary Assembly will take place from 20 to 23 September 2021. (Sebastian Gollnow/dpa via AP)

The head of the German Bishops’ Conference on Monday defended the pope’s decision to allow the archbishop of Hamburg to stay on at this post, despite being faulted for his handling of sexual abuse allegations.

Limburg Bishop Georg Baetzing said that he understands how people feel about the decision, but that Pope Francis arrived at it by adhering to strict new rules that he instituted after a summit on abuse in 2019 to prevent cover-ups.

“There are a lot of people who are confused by this decision — they are voicing disappointment, they expected something else, among them not least those affected,” Baetzing said at the start of a regular gathering of the German Bishops’ Conference, which he chairs. “I can understand that well.”

However, Baetzing said “Pope Francis has kept to his own law.” He said the new rules outline the criteria under which bishops could lose their jobs, and “in recent years, a number of bishops in the world have lost their jobs because of this new legal position.”

Six months after Archbishop Stefan Hesse offered his resignation, the papal nuncio's office in Berlin said last week that Pope Francis had rejected the offer. It said the Vatican found “personal procedural errors” on Hesse’s part but an investigation didn’t show that they were committed with the intention of covering up abuse cases.

It also said Hesse had recognized his mistakes made when he served as a senior official in the Cologne archdiocese “with humility.” An influential German lay Catholic group sharply criticized the decision.

Hesse’s resignation offer came after a report commissioned by his counterpart in Cologne found 75 cases in which high-ranking officials neglected their duties in such cases. Hesse was faulted for 11 cases of neglecting his duty.

The archbishop of Cologne, Cardinal Rainer Maria Woelki, was cleared of wrongdoing by the report, but remains under pressure for his handling of the issue. He has refused to step aside.

The Vatican sent two envoys to Cologne in June to investigate possible mistakes by senior church officials in handling past sexual abuse cases and the “complex pastoral situation” in the deeply divided church there.

Baetzing said he's still waiting for an evaluation from Rome of their overall conclusions.