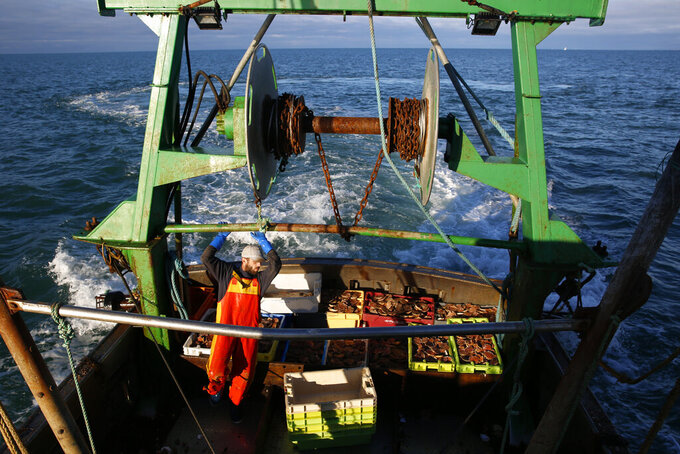 Nicolas Garriga, ASSOCIATED PRESS
French fisherman Sylvain stands aboard the trawler Le Chant des Sirenes (The Mermaids' song) as they fish at the limits of the French-UK waters, off Granville, Normandy, Tuesday, Nov.9, 2021. France has threatened to bar British boats from some of its ports and tighten checks on boats and trucks carrying British goods if more French vessels aren't licensed to fish in U.K. waters. (AP Photo/Nicolas Garriga)

PARIS (AP) — France's minister of the sea vowed Sunday to “continue the fight” in the country's dispute with Britain over fishing rights.

“We fight every day for these ships, for these licenses, and we will not give up,” she told reporters, criticizing the British interpretation of post-Brexit rules over fishing rights as “inadmissible.”

Fishing is a tiny industry economically, but one that looms large symbolically for both Britain and France, which have long and cherished maritime traditions.

The U.K. licenses are at the center of the dispute following Britain’s split with the European Union earlier this year. Before Brexit, French fishermen could fish deep inside British waters. Now they need to be granted a special license from the British government or the self-governing British Crown dependencies of Jersey and Guernsey to fish in certain areas.

Those authorities have already granted 961 fishing licenses to French boats, according to French authorities, but France wants about 150 more licenses. Girardin said France set a deadline for the fishing talks, led by the European Union, to end in December.

French President Emmanuel Macron said Friday that France “will not yield.” The British “are playing with our nerves,” he said.

Sunday's comments came three days after Girardin said the French government is considering providing financial compensation to French fishermen who can't get licenses. The move had prompted harsh criticism from local fishermen who feared France would give up the fight.

Follow all AP stories on post-Brexit developments at https://apnews.com/hub/Brexit.