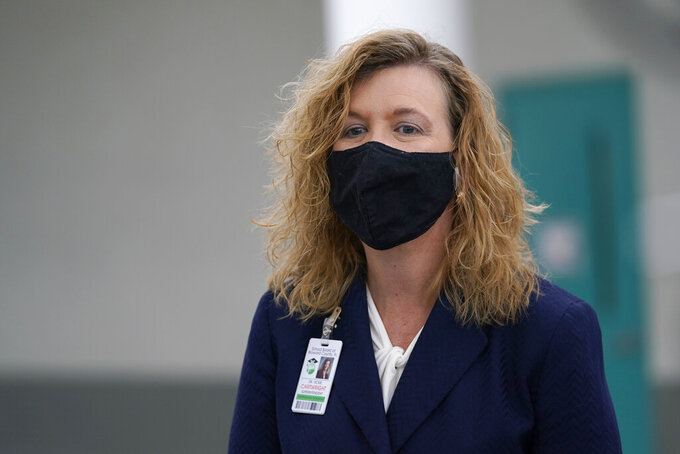 Lynne Sladky, ASSOCIATED PRESS
FILE- In this Sept. 2, 2021, file photo, Broward County Schools interim superintendent Vickie Cartwright visits the New River Middle School, in Fort Lauderdale, Fla. The on-again, off-again ban imposed by Republican Gov. Ron DeSantis to prevent mandating masks for Florida school students is back in force. The 1st District Court of Appeal ruled Friday, Sept. 10, that a Tallahassee judge should not have lifted an automatic stay two days ago that halted enforcement of the mask mandate ban. The upshot is that the state could resume its efforts to impose financial penalties on the 13 Florida school boards currently defying the mask mandate ban. (AP Photo/Lynne Sladky, File)

The 1st District Court of Appeal ruled Friday that a Tallahassee judge should not have lifted an automatic stay two days ago that halted enforcement of the mask mandate ban.

The upshot is that the state could resume its efforts to impose financial penalties on the 13 school boards currently defying the mask mandate ban. Those have included docking salaries of local school board members who voted to impose student mask mandates.

DeSantis spokesperson Christina Pushaw said in a tweet that the appeals court decision means “the rule requiring ALL Florida school districts to protect parents’ rights to make choices about masking kids is BACK in effect!”

The U.S. Department of Education announced Thursday it has begun a new grant program to provide funding for school districts in Florida and elsewhere that lose money for implementing anti-coronavirus practices such as mandatory masks.

White House press secretary Jen Psaki amplified that position at a briefing Friday, saying that President Joe Biden's administration will use money and other resources to support any school officials "who do the right thing by students, and that includes putting in place mask requirements and other requirements that will keep them safe.”

Also Friday, the U.S. Department of Education’s Office for Civil Rights sent a letter to Florida Education Commissioner Richard Corcoran to inform him that the federal agency would be investigating whether the state’s ban on mask mandates violates federal civil rights laws that protect students with disabilities.

DeSantis has argued that the new Parents Bill of Rights law reserves solely for parents the authority to determine whether their children should wear a mask to school. School districts with mandatory mask rules allow an opt-out only for medical reasons, not parental discretion.

The governor, who had predicted a victory at the appeals court, said in a tweet there is “no surprise here” and added: “I will continue to fight for parents’ rights.”

Charles Gallagher, attorney for parents challenging the DeSantis ban, said he is “disappointed” by the appeals court decision.

“With a stay in place, students, parents and teachers are back in harm’s way,” Gallagher said in a tweet.

The back-and-forth legal battles stem from a lawsuit filed by parents represented by Gallagher and other lawyers contending that DeSantis does not have authority to order local school boards to ban mask mandates.

Leon County Circuit Judge John C. Cooper agreed in an Aug. 27 order, then on Wednesday lifted a stay that had blocked his ruling from taking effect. The appeals court now has put that stay back in place as the governor seeks a ruling making his mask mandate ban permanent.

The appeals judges noted that a stay is presumed when a public officer or agency seeks appellate review of a judicial order.

“We have serious doubts about standing, jurisdiction, and other threshold matters,” the appeals judges wrote in a one-page decision. “Given the presumption against vacating the automatic stay, the stay should have been left in place pending appellate review.”

In his previous order, Cooper said the overwhelming evidence is that wearing masks provides some protection for children in crowded school settings, particularly those under 12 who are not currently eligible for vaccination. The court battle comes as Florida copes with the highly contagious delta variant of the coronavirus that has overrun hospitals across the state.

On the Parents Bill of Rights, Cooper said his previous order follows the law that reserves health and education decisions regarding children to parents unless a government entity such as a school board can show their broader action is reasonable and narrowly tailored to the issue at hand.

The next stage of the legal fight will test whether Cooper's conclusions are correct.