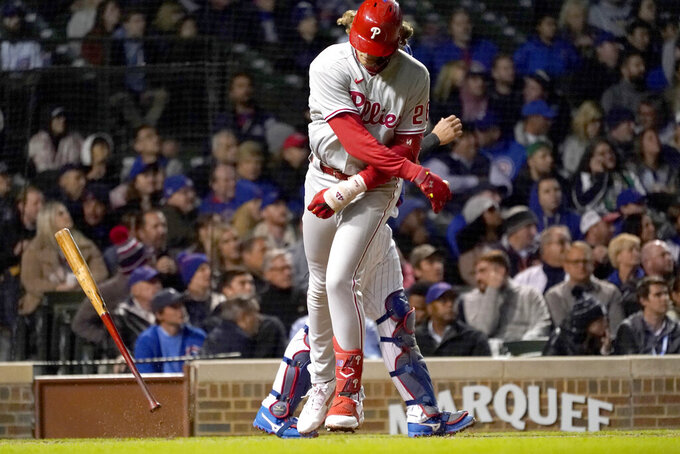 Charles Rex Arbogast, ASSOCIATED PRESS
Philadelphia Phillies' Alec Bohm slams his bat to the ground after flying out to end the top half of the fifth inning of a baseball game against the Chicago Cubs Wednesday, Sept. 28, 2022, in Chicago. (AP Photo/Charles Rex Arbogast)

WASHINGTON (AP) — The Philadelphia Phillies’ four-game weekend series at the Washington Nationals has been adjusted because of the forecast for rain in the nation’s capital from the remnants of Hurricane Ian.

The teams will play a day/night doubleheader Friday instead of Saturday. Early afternoon games are still scheduled for Saturday and Sunday, the Nationals announced Thursday.

Struggling Philadelphia goes into Washington fighting with Milwaukee for the final NL wild-card spot. The Phillies listed Bailey Falter as the starter for the first game of the Friday doubleheader against the Nationals' Erick Fedde, with Noah Syndergaard set to pitch the nightcap.

Kyle Gibson is scheduled to start for Philadelphia on Saturday and Zack Wheeler on Sunday.

It’s not clear what would happen if the Phillies and Nationals cannot get in all four games this weekend. There is one day between the scheduled end of the regular season Wednesday and the start of the wild-card round Oct. 7.