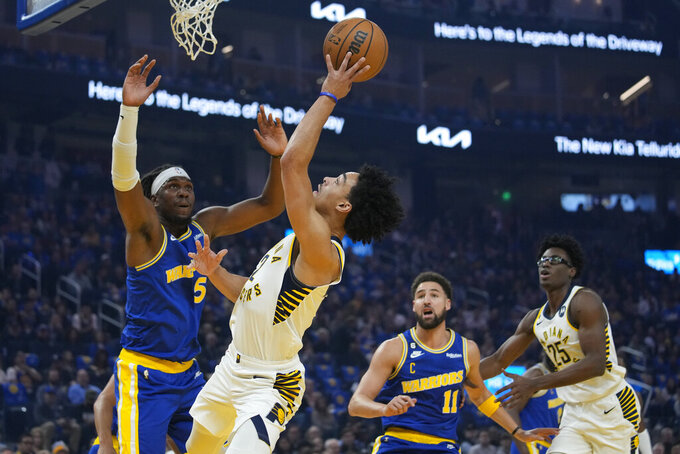 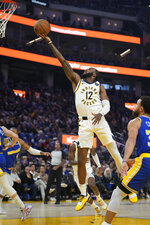 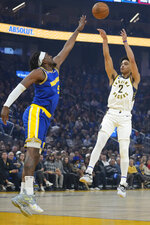 Nembhard scored a season-high 31 points and added 13 assists and eight rebounds to lead the undermanned Indiana Pacers to a 112-104 victory over the Golden State Warriors on Monday night.

A second-round draft pick, Nembhard made a key 3-pointer with 4:26 to go and another jumper less than two minutes later.

“He was masterful tonight ... 31 and 13, those are high lottery numbers,” coach Rick Carlisle said.

Indiana played without starting point guard Tyrese Haliburton for a second straight game as he nurses soreness in his left groin.

Klay Thompson scored 28 points and made eight 3-pointers, moving up the NBA's career 3-point list on the six-year anniversary of his 60-point masterpiece against the Pacers.

Thompson finished 9 of 23, but Stephen Curry was held to 12 points on 3-for-17 shooting. Jordan Poole scored 23 starting in place of Andrew Wiggins, who sat out with tightness of the adductor muscle in his right leg.

“No matter what we do, it’s going to be hard to guard these guys. We had some good fortune with them missing some shots they may normally make,” Carlisle said. “But our guys played with a lot of presence to start the game. We were switching a lot and everyone was tied together.”

Nembhard and the Pacers hardly looked like a team playing the second game of a road back-to-back.

“He was hoopin’ and I think that starts in the first half for us,” Golden State's Donte DiVincenzo said. “The guards have to get into it a little bit more.”

Curry went 1 of 7 in the first half, missing all four of his 3-point tries and was 2 for 10 from deep overall. Curry finally connected from long range with 5:13 left in the third after missing his first five.

The Pacers, missing six players with injuries or illness, jumped out to a 22-12 lead as Golden State started 5 for 17.

Thompson knocked down three straight 3-pointers — all from the right wing — to tie the game at 42 with 4:51 left in the second quarter before a Pacers timeout. Thompson also dished out an assist on Jonathan Kuminga's layup before his trio of 3s and nearly had another when Kuminga was fouled and made both free throws to cap a 20-2 run 3:40 before halftime.

“I remember people being mad at me for not keeping him out there on the floor so that he could try to get 70, but we had a big lead and at the end of the third it was clear cut we were going to win the game,” Warriors coach Steve Kerr said. “It was an easy decision. I just remember, we've seen Klay get hot a lot over the years, but there's a few games that stand out and that's one of them.”

Pacers: At Minnesota on Wednesday night to conclude a seven-game trip over 12 days that is the team's longest in 37 years.

Warriors: At Utah on Wednesday night having won two straight and six of seven vs. the Jazz.