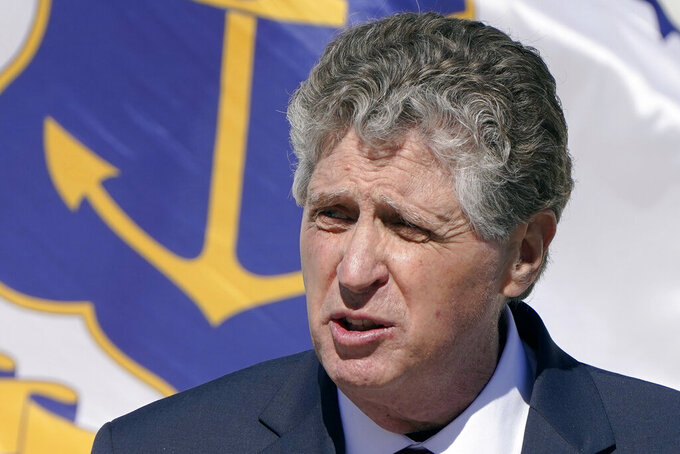 McKee is a former lieutenant governor who became the state’s chief executive in March 2021 when two-term Gov. Gina Raimondo was tapped as U.S. commerce secretary. He was the heavy favorite in the liberal state as both a Democrat and incumbent, who was endorsed by a host of large unions. Kalus is a business owner and political novice who moved to the state last year.

McKee said in his victory speech that he would continue working to help families and municipalities, and create jobs.

McKee sought to differentiate himself from Kalus by talking about how he’s a lifelong Rhode Islander with decades of public service in the state. Like Democrats nationwide, he worked to keep abortion rights front and center in the campaign and convince voters that he would champion reproductive rights.

He highlighted the executive order he signed after the U.S. Supreme Court overturned Roe v. Wade that prohibits cooperation with other states investigating people who travel to Rhode Island to seek abortions.

“It is more important than ever to make sure we have strong leadership on the state level that will fight to protect those rights,” he said. “Governors are the last line of defense, and as long as I am governor, the right to choose will always be protected.”

Only about 15% of registered voters in the state are Republicans. Kalus tried to convince independent voters, who make up more than 40% of the electorate, that McKee is an insider politician who is beholden to special interests. She seized on the fact that the FBI is now investigating the awarding of a controversial state contract and criticized McKee over the approval of public financing for developers. She told voters she would end the “I know a guy system” in Rhode Island and help working families.

She thanked her supporters in her concession speech, telling them it has been the “honor of a lifetime” to serve as their voice.

Kalus, who owns a COVID-19 testing company that is suing the state over a canceled contract, moved to Rhode Island last year from Illinois and previously worked for former Illinois Republican Gov. Bruce Rauner. She bought a home in Newport, registered to vote in Rhode Island as a Republican in January and declared her candidacy in March.

With a week to go before the election, profane texts were shared with media outlets that Kalus sent a contractor in 2018 and 2019 in Chicago. Kalus was upset over construction delays and billing disputes when she was opening a new medical office with her husband. She defended the texts to WPRO, saying they show she and taxpayers would not be taken advantage of if she were governor.

Independent candidates Zachary Hurwitz and Paul Rianna and libertarian Elijah Gizzarelli were also on the ballot.

Voter turnout as the polls closed in the general election was about 43% of the 815,000 residents eligible to vote, according to an unofficial tally by the secretary of state’s office. Turnout in the 2018 midterm elections was 48% in Rhode Island.

In Pawtucket, Rhode Island, the Justice Department monitored polls for compliance with federal voting rights laws. The city was one of 64 jurisdictions in 24 states selected. The Justice Department has sent attorneys to monitor election sites nationwide for more than five decades.

The governor campaigned on his efforts to help the state’s economy recover from COVID-19, promising that he could continue the momentum. He said he would continue to work to pass “smart gun safety laws” to make sure every resident is safe.

McKee’s 94-year-old mother, Willa, was a hit during the primary for a humorous ad. She returned to help him in the general election, appearing in another ad and jokingly interrupting him when he steals her line.

McKee said he has enjoyed seeing his mother “become quite a celebrity” in Rhode Island.