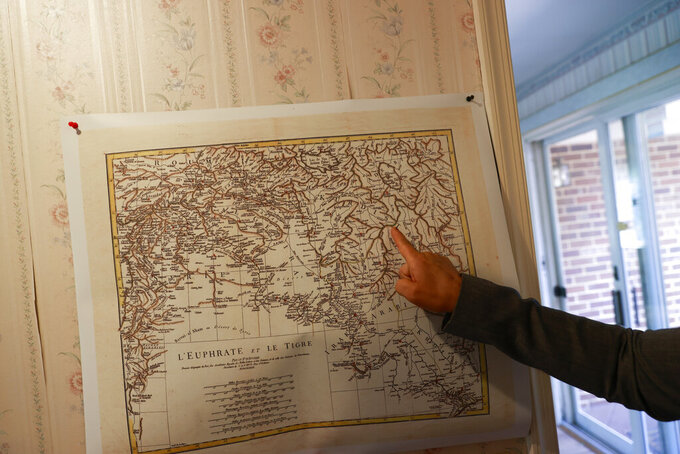 Shaban Athuman, ASSOCIATED PRESS
Dr. Ferwerdin Al Barzanji points on the map of her homeland on Saturday, June 26, 2021 in Harrisonburg, Va. Al Barzanji, who is a refugee from Kurdistan Region, has been in the united states for the last 5 years. She came to the United States hoping to continue her career as a doctor, but Virginia's workforce barriers keep refugees out of the health care field - even with decades of experience. (Shaban Athuman/Richmond Times-Dispatch via AP)

RICHMOND, Va. (AP) — Ferwerdin Al Barzanji has nightmares about what could have been — the promises she could have kept — if her almost 30 years as a university professor and medical researcher in Kurdistan were enough.

When she fled her home homeland bordering Iraq, Syria and Turkey to find refuge in Harrisonburg in 2016, families were depending on the monthly stipends she provided for food and housing. Students awaited her go-ahead to apply for grants at the college where she would teach.

But within two years, she sent apologies instead. There was no money to send. There was no university job, no lab that would let her continue her work.

Like so many refugees, Al Barzanji’s options were limited, even with decades of experience and her fluent command of English, Arabic and Kurdish. Credentials, including her doctorate, were worthless in Virginia. To continue her career, she’d have to start over and go through school again. She couldn’t afford it, and it would be years before money flowed in again.

Refugees in the U.S. receive roughly eight months of financial assistance upon arrival, and after extensive interviews from federal officers abroad who determine their eligibility for resettlement, they’re immediately able to work. But neither Al Barzanji or her husband, Heja Al Sindi, could find employment that paid them a living wage.

“They told me from the beginning, ‘You (can’t) think about your degrees. Ph.D.? Master’s? Teaching? No. You have to go to either the food factories or these distribution centers. Places like that in order to work,’” she recalled. “‘You can’t start like a university professor or a lab scientist.’”

If both of them stayed in the U.S., they wouldn’t be able to give their five children a better education — the reason they left their hometown after 50 years and the one promise Al Barzanji refused to let go.

So they made a decision that would separate their family: Al Sindi would go back and work as the vice president of the University of Kurdistan and send his salary to his family in Harrisonburg while Al Barzanji continued her work as an interpreter and full-time mother.

“I put all my feelings and everything into their success. I have to forget about myself,” she said. “So I have to think about it like this. This is it. I have to live like this.”

Del. Kathy Tran, D-Fairfax, introduced budget language establishing a work group to identify barriers keeping refugees out of the workforce and policy changes that could help so Al Barzanji doesn’t have to.

Tran, who came to the U.S. from Vietnam at age 2, saw her father spend 14 years getting a dental license after already being a practicing dentist in Vietnam. It’s a recurring pattern that carries a toll, she said.

While the work group’s recommendations won’t be ready before the special session focused on COVID-19 recovery, Tran said she hopes her colleagues recognize that immigrants and refugees are communities in need of investment and resources as they face a gutting economic and emotional fallout.

The lack of job security, or availability of only lower-wage jobs with limited benefits, is heavily tied to health, said Dr. Fern Hauck, a University of Virginia professor who founded Charlottesville’s refugee clinic in 2002. Her patients have reported headaches, backaches and dizziness as a result of doing work they’re not used to — which then leads to mental distress.

While the U.S. is seen as a land of opportunity, that opportunity is often not there immediately, Hauck said — especially when employers ask for prior experience and references within the country.

“In many cases, people had to flee their homes,” Hauck said. “I’ve had the experience where someone was looking for his records from a professional school and the school had been attacked and bombed and no records existed anymore. So then how do you get a job here?”

Loosening the regulation process for credentialed refugees or creating a pathway for internationally trained workers could help alleviate the impact, said Hauck, adding that she’s met patients who were doctors back home and didn’t have the luxury of doing a residency program that meant long hours away from their family.

The loss of family support and increase in family separation are among the major reasons why immigrant health deteriorates in the U.S., said Dr. Gabriela León-Pérez, a sociology professor at Virginia Commonwealth University specializing in migration and immigrant health. León-Pérez added that immigrant women especially balance a complicated web of work and parental stress often fueled by a shift to more demanding low-wage jobs with inflexible hours.

The global health crisis also accelerated unemployment among immigrant women, who continually had the highest rates in the U.S. throughout the pandemic and reached 18.5% in May 2020.

When the pandemic struck and Al Barzanji’s appointments as an interpreter dried up, all she had to pay her rent with was the $1,000 in savings she had planned to use if her uncle, who’s on dialysis, needed help paying bills. In the first 20 days, money transfers between Kurdistan and Harrisonburg weren’t going through and rent was due.

The support then was coming from her predominantly immigrant community, who rallied behind her and offered to pay.

Al Barzanji’s house was $925 a month, but when school shifted online and colleges sent students home, her kids needed faster internet. They needed rooms to study. She needed space to conduct her interpretation work, which was now virtual and scattered. Al Barzanji would take what she could. They moved to a larger home that was twice the rent and whose increased electricity price tag atop the other changes culminated in an additional monthly cost of $1,200.

For three years, she had volunteered at the Harrisonburg free clinic to feel alive again — to feel like her life’s work hadn’t been wasted. Then in December, it closed.

When Al Barzanji arrived in Harrisonburg in 2016 — a year after Turkey’s ramped-up attacks on Kurdistan resulted in thousands being killed or displaced — Virginia was one of only five states in the U.S. to introduce at least four anti-refugee bills that would essentially block lawfully admitted refugees from residing in the state. Republicans representing areas with major resettlement agencies, such as Northern Virginia and Richmond, proposed all of them. None made it past committee.

But President Donald Trump’s 18,000-person federal cap on the number of refugees allowed in the U.S. — the lowest in 40 years — would result in Virginia experiencing a nearly 70% sustained decline in refugee arrivals after 2017.

The only year Virginia recorded fewer new refugees was this past year, when the pandemic slashed global travel and constrained resettlement opportunities.

At 1,484, the figure is only a 332-person difference from 2019 — the same year Gov. Ralph Northam wrote then-Secretary of State Mike Pompeo to refuse Trump’s executive order allowing states and localities the power to prohibit refugee arrivals.

“Virginia has welcomed refugees who are fleeing war, persecution, or other dire circumstances. We know that no one chooses to abandon their home until conditions become so difficult that the unknown is preferable,” Northam wrote. “Virginia’s lights are on and our doors are open, and we welcome new Virginians to make their homes here.”

But the cap had already reduced the federal funding of refugee agencies and shut down 100 of them heading into a pandemic in which immigrants faced a surge of unemployment, loss of health care and housing, and limited COVID information that was translated into their languages.

The cutbacks meant that even with the workforce training, there was no guarantee of jobs in industries where employers were previously “just as distressed as we were” and experiencing worker shortages, said Harriet Kuhr, the executive director of the International Rescue Committee in Charlottesville and Richmond.

“Those four or five years were not fun for us,” said Kuhr, noting how the federal cap also separated families that partially came before 2016 while the rest were stuck outside the U.S. even after being vetted by the government.

The separation of families — whether it be through work, living in separate countries or at the U.S.-Mexico border — is a significant stressor, León-Pérez said.

For Al Barzanji, the daily phone calls are the closest option she has to bridge the 6,000-mile divide standing between her husband and their five children in Harrisonburg. Over the past five years, the conversations clung to hope that the pain in being apart will soon be worth it. Other times, they were filled with desperation. Fear. Doubt.

“Fera, do you think we did the right thing?” her husband asks.

She always reassures him with a yes — because of the kids.

The oldest graduates from George Mason University with an engineering degree next spring. One is at James Madison University studying biology. Another is headed there in the fall. The two youngest are in high school.

“We have to the best for our kids. ... But don’t think too much about us,” she tells him. “If you are fed up with being apart, come here. I will go to work — factory work — for six months until you’re able to work here again.”

As a university professor getting his doctorate in management, the restrictions in the way of him getting a job are not as stringent as they are in the medical field, Al Barzanji said. But even the idea of those six months feels as distant as ever. It’s more likely that the next time they’re together for longer than a few weeks out of the year is when he retires to the U.S.

That could take years, but in the minutes leading up to the goodbyes, she likes reminding him of the life they will one day live — one where the beach is a frequent destination; where they’re side by side cheering on their children as they walk across the graduation stage; where they’re no longer afraid.

He rarely questions it. The weight of tomorrow can wait.