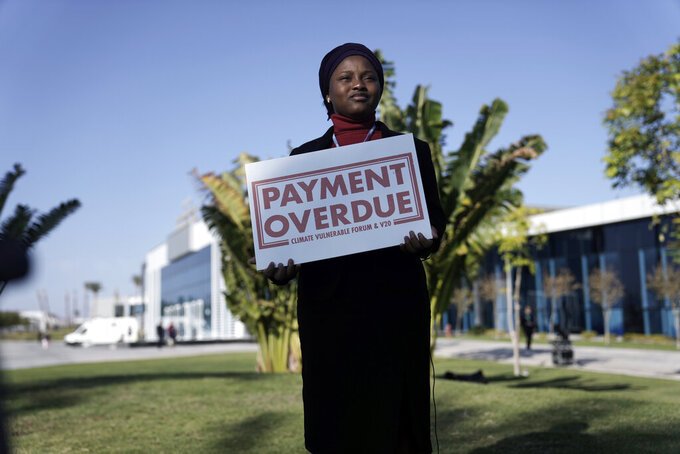 Nariman El-Mofty, ASSOCIATED PRESS
Nakeeyat Dramani Sam, of Ghana, poses for photos at the COP27 U.N. Climate Summit, Friday, Nov. 18, 2022, in Sharm el-Sheikh, Egypt. She made a plea for negotiators at the summit to come to an agreement that could help curb global warming. (AP Photo/Nariman El-Mofty)

So, when 10-year-old Nakeeyat Dramani Sam spoke during a plenary session Friday with hundreds of delegates, her soft voice and direct message cut through the dryness, a reminder to negotiators and everybody listening that decisions made at climate talks can have a direct impact on people.

Talking about suffering in Ghana due to flooding, she held up a sign that said, “Payment Overdue."

“I put a simple question on the table," she said. “When can you pay us back? Because payment is overdue.”

Sam was talking about a thorny issue that has taken center stage over the last two weeks of negotiations at the summit called COP27, hosted in the Red Sea resort city of Sharm el-Sheikh, Egypt. Many developing nations are insisting that rich countries, which have contributed most to climate change because of high greenhouse emissions, compensate them for the damage.

In climate negotiations, the issue is called “loss and damage.” It's a topic that produces a wide range of opinions and nuanced battle lines. Developed nations like the United States have resisted such calls for compensation, not wanting to be on the hook for what could be open-ended liability. China, also a high-carbon emitting country, supports the idea of rich nations contributing to such payments but doesn't want to pay. On Thursday, the European Union put forward a proposal to create a fund for loss and damage. While the proposal gave negotiators something specific to chew on, it also likely deepened divisions.

Sam's speech didn't bother with the machinations of negotiations, but rather had the kind of frankness and freshness that comes natural to children.

She told the attendees that she had met with U.S. Climate Envoy John Kerry earlier this week. Kerry had been nice, she said, and the meeting got her thinking about the future.

Her next sentence had humor in it, though she certainly didn't mean for that.

“By the time I’m his age, God willing, it will be the end of this century,” she said, implicitly saying, as kids often do about adults, that Kerry was old. Kerry is 78.

Shortly after that came a powerful and direct message.

Talking about how scientists say the world has less than a decade left to continue polluting at today's rates before the effects of global warming get much worse, Sam said: “Have a heart and do the math. It's an emergency."

When Sam finished speaking, she received a standing ovation.

In an interview afterward, Sam said that her environmentalism began a few years ago with a love for trees. She wrote a children's book about trees in Ghana and to date has planted over 100 trees.

“I also call for action that every child must plant a tree,” she said, standing with her mother and aunt.

Sam said that she was a poet, and when prompted recited from memory a poem about climate change that ended with exhortations for rich countries to assume responsibility for historical climate damage and pay up. Children were the best people to deliver such messages, she said, because they would be around to suffer the consequences of warming planet.

“We are the future leaders, so when we talk people listen," she said. "I don't know about the adults because I'm not at their age. ”