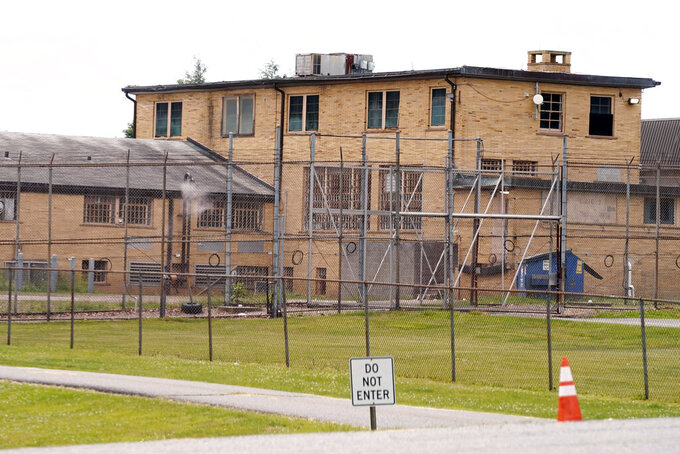 Seth Wenig, ASSOCIATED PRESS
FILE — In this June 8, 2021 file photo. a high fence surrounds buildings on the grounds of the Edna Mahan Correctional Facility for Women in Clinton, N.J. A male corrections officer at New Jersey's long-troubled and only women's prison has been charged with sexual assault and official misconduct stemming from a September incident with an inmate, the state's top law enforcement official said Wednesday, Oct. 13, 2021. (AP Photo/Seth Wenig, File)

Senior corrections officer Tyrell Harris-McLaughlin was charged in a complaint brought by prosecutors for allegedly sexually assaulting the inmate on Sept. 16 at the Edna Mahan Correctional Facility for Women, according to authorities.

The victim, who has been identified only as an inmate at the Hunterdon County facility, was taken to a hospital where evidence from the alleged assault was collected. Authorities said the State Police lab linked semen that was collected to Harris-McLaughlin, according to the charging document.

The Associated Press does not identify victims of sexual assault unless they come forward publicly.

Harris-McLaughlin had supervisory power over the woman because of his status as a senior correctional police officer, authorities said.

"Anyone in custody is entitled to be free from sexual or other assaults,” said Office of Public Integrity and Accountability Executive Director Thomas Eicher. “When law enforcement officers assault and exploit those subject to their authority, as alleged here, we will ensure that they are fully investigated and prosecuted.”

It's unclear whether Harris-McLaughlin has an attorney to speak on his behalf.

The allegations are “nothing short of reprehensible,” if proven true, said William Sullivan, the head of the union representing correctional officers, PBA Local No. 105.

The charge is the latest in a long list of developments at the prison, which Democratic Gov. Phil Murphy has pledged to shutter.

Asked Wednesday what he was doing about the environment at the prison and how another alleged sexual assault could have happened despite close scrutiny, Murphy said his administration is moving forward with closing the facility.

“This is literally disgusting — yet again — and we’re going to turn the page, and this place is going to get closed,” Murphy said.

He has not given a timeline for when or detailed what would happen with the inmates at the prison.

“First, the allegations are that yet another person who was in the state’s care and protection was sexually assaulted by a corrections officer. Second, a senior officer was charged with a rape that reportedly occurred last month, during a time when the prison has been under scrutiny by the NJDOC itself, the state’s outside advisors, and the U.S. Department of Justice,” LoCicero said. “This speaks to how deeply broken our state prison system is and how closed off staff members have been from public view and accountability.”

In August, state and U.S. Justice Department officials agreed to install an independent monitor at the prison because of its documented history of sexual abuse of inmates.

In June, the top corrections official in the state resigned amid scrutiny over what authorities said was a violent attack on inmates in January, with women being punched and pepper sprayed.

In April, New Jersey sought to put the prison's troubled history behind it and turn a new page by settling a class-action lawsuit with inmates for $21 million. The settlement covers 20 lawsuits filed by current and former inmates who say they were victims of sexual misconduct as well as all inmates incarcerated since Jan. 1, 2014.

And in January, the attack that led to Corrections Commissioner Marcus Hicks' resignation unfolded. Officials have said guards carried out violent cell extractions of inmates, which led to 10 officer being charged in an alleged assault on at least six women. Attorneys for the guards have said they plan to plead not guilty.