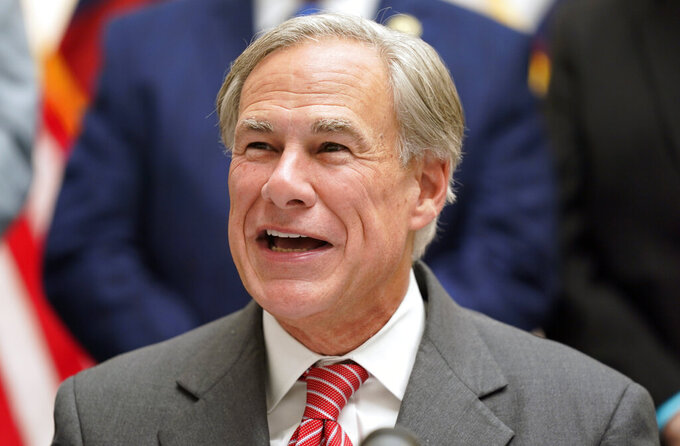 AUSTIN, Texas (AP) — The sweeping changes to Texas' election code that GOP Gov. Greg Abbott signed into law Tuesday make it harder — sometimes even legally riskier — to cast a ballot in the state, which already has some of the nation's most restrictive voting laws.

Democrats gridlocked the state Capitol for 38 consecutive days after more than 50 fled to Washington, D.C., in July to deny Republicans a quorum, which is required to conduct the state's business. Enough of them returned about three weeks ago to end the impasse, and GOP leaders made quick work of pushing the bill through both chambers. Abbott immediately said he would sign it, which happened Tuesday.

Texas is among at least 18 states, including Florida, Georgia and Arizona, that have enacted new voting restrictions since the 2020 election, according to the Brennan Center for Justice. The national GOP campaign to tighten voting laws has been partly driven by former President Donald Trump’s false claims that the election was stolen.

Here's a closer look at what's in the new Texas law:

Some of the most significant changes in Texas law concerns partisan poll watchers, the volunteers deployed by both major parties to observe voting and counting. As recently as 1962, Republican poll watchers in some parts of Texas challenged Black and Latino voters to read and explain the U.S. Constitution before casting ballots as part of a campaign dubbed “Operation Eagle Eye.” In 2020, then-President Donald Trump cited unverified observations from GOP poll watchers to spread doubt about the results and make false claims of fraud.

The final language of the omnibus law gives partisan poll watchers new access, protections and power. The law makes it a Class A misdemeanor — comparable to burglary of a vehicle — for an election official to reject an appointed poll watcher. Under the measure, anyone who knowingly obstructs a poll watcher's view also commits a legal offense. The law states the watchers may have “free movement” around the voting facilities and may "sit or stand near enough to hear or see the activity.” Texas law still prohibits poll watchers from watching someone actually cast a ballot. However, they may observe the transfer of voting data.

The law empowers poll watchers to sue and seek court orders against election officials who get in their way. The new law also requires poll watchers to swear an oath that they will not harass voters and complete a training prior to participating for which they must show a certificate upon arrival.

Poll watchers may only be removed for violating election law if the violation is witnessed by the election clerk or judge and for violations of the penal code.

Republicans argue these changes are needed because voters will only trust elections if their representatives have free access to just about every aspect of voting and counting. But Democrats and civil rights organizations worry about the history of Texas conservatives using poll watchers to intimidate racial and ethnic minority voters.

The law written by Republicans explicitly rolls back ways Democratic counties have made it easier for people to vote, especially during the coronavirus pandemic. It bans drop boxes for mail ballots — a practice that has been used for years in other states with no major problems — and prohibits the mailing of absentee voting applications and ballots to all eligible voters. The law also makes it a felony for any election official who sends out unsolicited applications or ballots to vote-by-mail.

The GOP law also bans drive-thru voting for most voters and controls the times at which county governments can keep polling places open. That will put a stop to 24-hour voting locations. Houston's Harris County — one of the nation's largest, most racially diverse areas — says 140,000 voters utilized its drive-thru and 24-hour locations in November.

Republicans argue that these procedures were used during the ongoing but once-in-a-century pandemic and shouldn’t be regular features of voting in the state. Democrats and voting rights groups say those measures simply make it easier for people to cast ballots and especially helped working class, young and ill voters access the polls.

Two provisions of the law make voting more convenient, by extending early voting hours and mandating that workplaces allow employees to make a trip to the polls during either early voting or on Election Day.

Texas is already one of the hardest states in the nation in which to vote by mail. The process is limited to those 65 and older, voters who will be out of state during the election or people with disabilities. But after Trump objected to mail voting during his failed reelection bid, Republicans in Texas and elsewhere turned against the method and have been eager to tighten regulations on it.

The Texas law adds more steps and paperwork for voters, including requirements to include their driver's license number, election identification certificate or the final four digits of their Social Security number and an “ink-on-paper” signature that can verifiably be matched with any previously filed signature in corresponding Texas Department of Public Safety records.

Opponents of the provision — somewhat similar to one that passed in Georgia — say it would create another opportunity for voters to make minor mistakes that could result in ballots being thrown out.

The new law partially addresses that concern. Voters who submit ballots before Election Day will be notified of problems and allowed to go to an elections office to fix some issues that can disqualify the vote, such as a mismatched signature, while some qualifying voters may be able to correct mistakes online.

The Texas law, like others approved or proposed this year, creates or expands several criminal violations involving elections, some of which are broadly defined and could ensnare voters or those who help them. Republicans contend they're necessary to prevent fraud or improper influence on voters. Democrats note, accurately, that voter fraud is exceedingly rare. The state's Republican attorney general dedicated millions of dollars to voter fraud investigations since last year but has only turned up a handful of cases in a state where more than 11 million people voted in November.

The law expands an existing mandate that people who help voters with ballots provide information on the envelope attesting to their role. Under the law, anyone who helps a voter complete a ballot must also submit their name, address, relationship and details of whether they were paid by a campaign or political committee and take an oath, under penalty of perjury. Voters who can’t complete a ballot on their own or read the ballot are allowed to vote with assistance.

In a win for disability advocates who said the clause required disclosure of personal or medical information, the law's final language amended the oath to not obligate voting assistants to pledge they certified the voter was eligible due to a disability or inability to read the ballot.

The law also requires local election officials to refer all cases of improperly cast ballots to the state attorney general. Voting rights groups worry this could be abused to prosecute common errors, such as a voter failing to update registration when moving counties. Republicans argue this is a commonsense way to prevent fraud.

Language that would have shielded people with felony convictions from prosecution if they cast a ballot without knowing they were ineligible to vote was cut out of the bill at the last minute. It was one the few areas of bipartisan agreement and overwhelmingly approved in the House following backlash over the arrests of two Texas voters, both of whom are Black, which intensified criticism amid a broader fight over voting restrictions that opponents say disproportionately impact people of color. GOP lawmakers in the Senate rejected the change.

Coronado is a corps member for the Associated Press/Report for America Statehouse News Initiative. Report for America is a nonprofit national service program that places journalists in local newsrooms to report on undercovered issues.